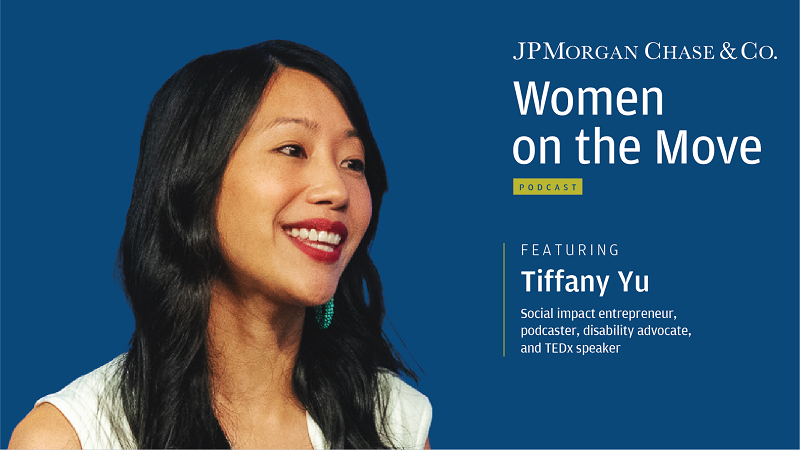 Inclusion, exclusion and the power of community from Diversability founder

Tiffany Yu, founder of the social enterprise Diversability, aims rebrand the way we envision disability. Throughout her career, Tiffany has used her platform to advocate for disability inclusion in many settings including the Word Economic Forum and multiple TEDx Talks. Recently, Tiffany was featured as a keynote speaker at the sixth annual Women on the Move Leadership Day. In this episode, she sits down with Sam Saperstein to speak about inclusion, exclusion and the importance of community building.

Tiffany discusses the visible and invisible disabilities that were brought on by a car crash when she was nine years old. Her father died in the traumatic accident and she suffered many injuries, including permanent paralysis in her arm and PTSD. Tiffany refers to the memory of this event as her first “disability origin story,” and noted that for the rest of her childhood and teenage years, she struggled with feeling shame about the accident. “I actually didn't tell anyone about it for 12 years,” she shares, “because not only was it a traumatic car accident that happened, but I lost a parent and in certain Asian cultures, having someone die in your family was seen as ill fate on the entire family.”

She describes her second disability origin story as the time when she began to take pride and ownership of her disability identity. Tiffany reflects on this moment in her life as a 21 year old intern at Goldman Sachs. After a meeting, she recalls her recruiter telling her, “Tiffany, I want you to know that you deserved your place here. You don't need to have a chip on your shoulder.” Tiffany describes that moment as giving her a “permission slip” to view herself based on her potential—as the recruiter did—and not on her disability—as she had done for so long.

Tiffany identifies that memory with the recruiter as a micro moment that had an outsized positive impact in her life. Just as we often discuss micro aggressions in society, she believes there are also micro inclusions. “Sometimes that passing conversation, that little micro moment to you can make such a deep impact, such a powerful impact on someone else,” she says.

Another powerful micro inclusion in Tiffany’s life came when she attended the World Economic Forum in Davos. “A large part of the event was these networking dinners,” she recalls. “And as someone who has a paralyzed arm, attending these dinners was probably my biggest fear because at the dinners you've got some fancy meat dish coming out, and in my mind, all I'm thinking about is how am I going to cut this? How am I going to enjoy this meal?”

Tiffany’s fears about how she would handle eating her food made it hard to focus on the dinner conversation. But, she says, she had the luck of being seated next to the rapper will.i.am, who was facilitating the conversation at her table. “He pulls my plate closer to him, continuing to facilitate the conversation, cuts my meat, pushes the playback and Voila—I can now enjoy the chicken dish and participate in the conversation,” she says.

The power of exclusion

While Tiffany believes in the impact of micro inclusions, she also believes in the power of exclusion—both at the micro and macro levels. She describes a personal history with micro exclusions, such as when she had to take a physical fitness class every year of school after her arm was paralyzed. “And for me, exclusion is the reason why I do the work that I do,” she says. “Part of the reason why I created Diversability is I wanted disability to be the reason to belong, not a reason to exclude.”

Part of the power of exclusion is that it keeps the excluded from feeling like a part of a community. Tiffany’s solution to that was to aim to build community through Diversability. She refers to a Japanese proverb that roughly translates to, The nail that sticks out, gets hammered down. Her childhood experience of not wanting to stick out led to her trying to hide her disability. “It's only in recent years, have I realized that I am going to be that nail that sticks out,” she shares. “It’s our duty to be that nail.”

“I’m a nail that sticks out and there are these other nails that are sticking out and I'm literally pulling, maybe that's what my hammer is doing—pulling all of the other nails out because that's who we are,” she adds. “That's how we make this world more colorful.”

Inclusion, exclusion and the power of community from Diversability founder

Listen on Spotify :Tiffany Yu's episode of the Women on the Move Podcast