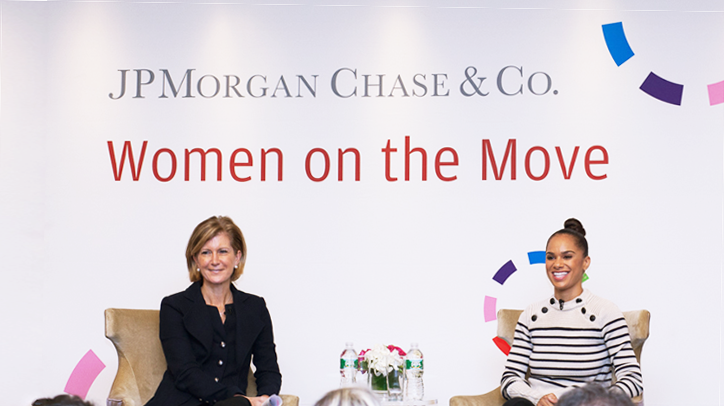 Getting to the Top of Your Game Takes Discipline, Hard Work

And it took a similar discipline for five senior women executives to achieve success in leading their respective lines of business at JPMorgan Chase.

Together, the six women shared insights into their careers and personal lives during a special event at our New York City headquarters. Several hundred women gathered to celebrate the second anniversary of Women on the Move, our program that challenges women to take charge of their careers by empowering themselves to succeed.

In a conversation with Asset Management CEO Mary Erdoes, Copeland reflected on her path to becoming a role model in the classical ballet field. "We're all dying to hear the story of your life and how you got started," Erdoes told Copeland. "What were you doing before you were 13?"

"I was very shy and I didn't really feel a connection to anything," Copeland said "Going to school was just torture for me … It just terrified me to be in front of people and have to speak. I was afraid of being judged." 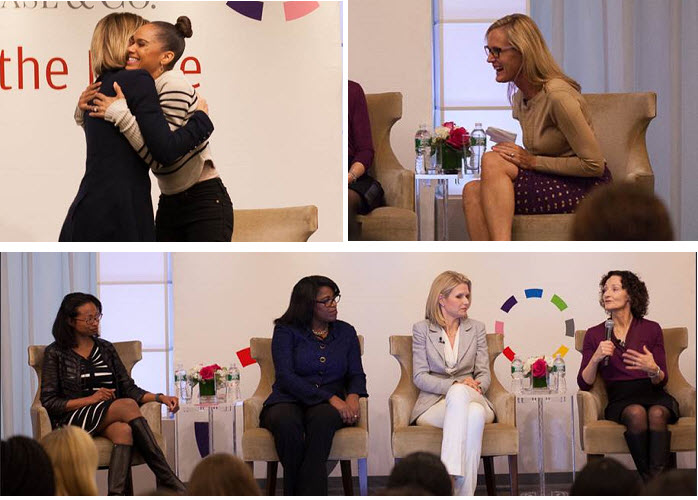 Inspiration plus copious amounts of raw talent and discipline

Copeland, an avid Mariah Carey fan, told Erdoes how the singer's music eventually inspired her to want to dance, create and choreograph as a teenager. With no dance experience, she decided at age 12 to audition for the role of dance team captain at her California middle school.

To her mother's surprise, Copeland got the role. Her teacher immediately took note of her talent and suggested she take a ballet class at her local Boys and Girls Club. "I really was pushed — kind of forced — into taking this ballet class I didn't want to do," she recalled. "I took my first ballet class on the basketball court in my gym clothes."

And once her new instructor saw her potential, she started calling and writing letters to her mother to get her into more structured dance classes. Again, Copeland didn't want to do it, but that all changed when she set foot in a ballet studio at age 13 and saw herself in the mirror.

“That was the first time I realized that, 'Oh gosh — you're beautiful, you're strong and you're good at something”

Copeland said, "That's where it all started, and four years later I was in New York dancing for ABT (American Ballet Theatre)."

When someone trains to become a classical ballet dancer, she or he becomes accustomed to taking three or four ballet classes a day, six days a week while balancing school and homework. "You give up your life — your childhood — for this," Copeland said. "So as a professional, it's not that big a deal to rehearse eight hours a day, five days a week."

The only black woman among 80 dancers

When she entered ABT straight out of high school, the hardest part was realizing how many talented people she was surrounded by — and then realizing she was the only black woman in a company of 80 dancers.

"That really changed the path of how I approach my life — it gave me a different purpose," Copeland told Erdoes. "I am a black woman and it's not really talked about, at least in a way that people can understand the struggles that we have. When you talk about the lack of diversity in classical ballet I don't think it can be compared to anything else in the world."

Copeland’s personal stories and authentic accounts of adversity reminded the audience about the importance of diversity and the hard work that still needs to be done to build a culture of inclusion.

Earlier in Monday's program, several senior women leaders addressed diversity and gender equality in the corporate world, during a panel discussion moderated by the firm's Chief Marketing Officer Kristin Lemkau. Since Women on the Move started in 2013, the program has traveled to JPMorgan Chase offices in 23 cities around the world and has met with more than 6,000 women, Lemkau noted. "We really just wanted to listen," she said. "And we've learned a lot."

About Women on the Move:

Recognizing that women face unique barriers to professional success, JPMorgan Chase launched Women on the Move in 2013. The program began as a series of town halls for the firm’s female employees in New York and offered an opportunity to collectively explore the challenges they face in the workplace and share ideas on how to best support women in their career development.

Led by Asset Management CEO Mary Erdoes and Chief Financial Officer Marianne Lake, senior women took the program on the road, hosting events and empowering women in locations where the company employs hundreds, and often thousands, of women. Since it began, the program has visited 23 cities and senior women from across the company have met with more than 6,000 employees.

Women on the Move has proven an invaluable channel to hear directly from and exchange ideas with women at all levels in the company, as well as industry leaders and members of the communities in which we live and work. As the Women on the Move program evolves, we are proud to share the work of our employees and nonprofit partners in helping women succeed and transform their lives.

Learn more about our support of helping women around the world achieve financial security.