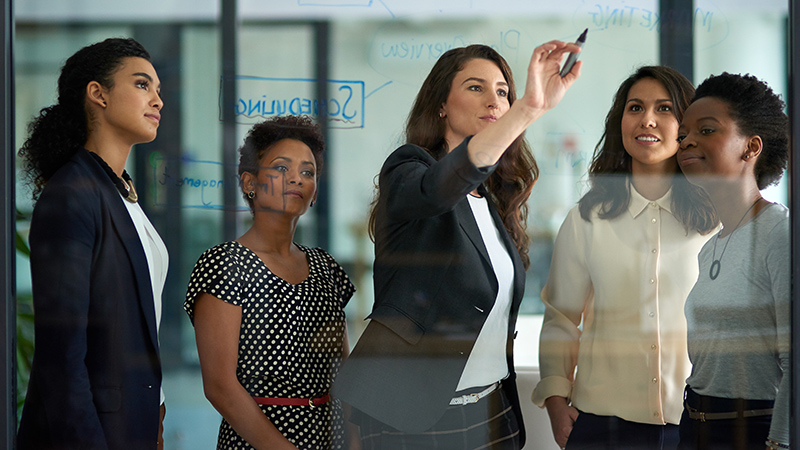 The Secret to Successfully Changing Careers

These women did it their way—and found success.

It’s a rare person that knows precisely what they want to accomplish in their professional life, then carries that goal over the finish line in a smooth, uninterrupted arc. The reality is that careers are often prone to change. The average American, for instance, switches jobs more than 12 times over the course of their career.

We all know that fulfilling work lives come in all shapes and sizes, and that most have second (and third and fourth) acts. But the reality of plunging into a job transition can be intimidating, especially for women, who may face barriers in the workforce.

But finding a dream career isn’t impossible. Many women have done it and done it well. Here, three such women—who have broken with convention, made unusual decisions, and taken risky career leaps—give advice on how to forge an unconventional path while staying true to personal goals.

Marla Rausch has had more than six careers in her lifetime. Before becoming CEO of Animation Vertigo, she studied journalism, attended law school, and held jobs as a foreign diplomat, office manager and financial advisor, among others.

Her biggest and most significant transition into animation and entrepreneurship happened more than a decade ago, while she was still working in finance. Her husband, who is also an animator, brought a project home during a busy season and worked on it while Rausch watched.

“It looked like a puzzle,” Rausch remembers. “He said, ‘I'm cleaning up data for a motion capture suit that we just did.’ I said, ‘That's interesting. Show me how you're doing it.’ And that's how it started.”

Today, Rausch’s company, Animation Vertigo, is in its fourteenth year of successfully innovating in the mobile gaming sector. And all it took to get there was a half-dozen trial careers:

“If you've ever looked at my CV, none of it would ever suggest that I would be an animator or an entrepreneur,” Rausch said. “I [just] learned how to do it.”

Rausch got her first experience in animation while working alongside her husband. When markets closed on her finance nine-to-five, she assisted him at his job at a major studio. She may have started out just burning the midnight oil for fun, but it was the critical stepping stone to becoming an animation executive.

Rausch started out as a journalism student, and the journey to becoming CEO has been an interesting (albeit difficult) process of trial and error. But she says embracing failure helped her manage.

“Each time I made a decision [about] what I was going to be and had a plan [for] what I was going to be…it didn't work out,” she said, citing this pattern as the explanation for her diverse resume. Nevertheless, she used the lessons from those so-called failures—such as not making it through law school—to get to the next stage in her life, eventually solidifying her place as a business leader in a notoriously male-dominated industry.

“At the end of the day, it's not whether or not you've succeeded, it's what you did when you didn't [succeed],” Rausch said. “If you can gather all the skills and talents and everything that you've learned in that field and take it to the next, I think that's a better thing.”

Karen Keogh has always been inclined to give back. As a child, she hosted lemonade stands and donated the proceeds to charity. Those early days spent helping others foreshadowed the job she has today—Head of Global Philanthropy at JPMorgan Chase. Initially, though, a career in philanthropy wasn’t on her radar. She always thought her knack for compassion would lead to work as a nurse, just like it did for her mother. But after studying nursing for two years in college, she realized she had a big problem: She was petrified of needles; so much so that she once fainted during a practice blood lab.

“The Nursing Dean was like, ‘We need to have a conversation about you continuing,’” Keogh said. “It was sort of a meeting of the two roads, and [discovering], ‘this is not the right path for me.’”

After this realization, Keogh made a series of career pivots. First to social work, then to politics and government, and eventually to philanthropy. Like Rausch, her career changes have peppered her CV with jobs, roles and skills that may not seem to make sense. But her varied experiences have given her critical talents she still uses today: “problem solving, listening, meeting people where they are, and compassion,” to name a few. Without her unique trajectory—from lemonade entrepreneur, all the way to philanthropist— Keogh may not have landed her current job.

“The important thing is to just be comfortable, to feel like you’re learning and growing and developing,” Keogh said. “And that could be in the same [career] track, or it could be in a non-linear career.”

Karen Keogh’s advice for making your career changes work for you:

“I see myself as a hand raiser,” Keogh said. “Early in my life, I realized that the more things I tried, the different types of work experiences I had, the more I would know people and network."

Case in point: Keogh got her first big break in the political realm when she offered to run an election day campaign for her city councilman, despite having no experience. Her willingness to put herself out there paid off, and eventually, she got a job on the Clinton-Gore campaign in the 90’s.

Have faith that you’ll land on your feet

It could be said that Keogh’s motto is “I’ll figure it out.” As different hurdles and challenges landed in her career path (remember the needles?) she always adapted. This approach is key to thriving on a nonlinear career journey; if you always have faith that you’ll land on your feet, Keogh says, the major career changes aren’t so scary. As she puts it: “Liberating. And exciting. And I’ll figure it out.”

Maria Rios always knew she had grit, drive and leadership skills, even as a young girl. “I never played with dolls growing up. I played with cash registers,” she said. “I remember myself playing having my own office, being the boss.”

The fantasy games of her youth are now a successful reality in an unlikely area: garbage. Today, the “queen of trash,” as some have called her, is the CEO and founder of a successful multimillion dollar waste management company.

Her big dreams of being a boss have always been matched by her motivation. Rios came to the United States at 13 from El Salvador, married young, then worked full-time while raising a family and paying her way through school. It wasn’t easy, but she never lost sight of her goals.

In 2013, Fortune magazine named Rios one of the most powerful female entrepreneurs in America, and her company continues to grow throughout Texas. What started as “two trucks and a dream,” as she called it, now services the Houston and Austin metro areas, and was the official waste service provider for the 2016 Super Bowl.

Maria Rios’s suggestions for realizing a lifelong dream of success:

Rios’s successful career has been hard won, but mostly unplanned. While raising her family and pursuing an education, Rios took a side job at a waste removal company to pay the bills. During that time, she was enrolled in a business school course that required that she write a sample business plan. Inspired by her part-time work, she drew up a proposal for a waste-removal company that took on small-but-tough projects; that proposal later became the building block of the multi-million dollar company she runs today.

Optimism has long defined Rios’s outlook, and it has consistently informed how she views both her struggles and her successes. For instance: Growing up, Rios said she joined her mother on housekeeping jobs throughout Texas, watching her clean offices and high rises across the city. Rather than focus on the challenges of the situation, Rios decided to use the trips as opportunities to dream big: “I was laughing and positive, never crying about something,” Rios said. “I think it's just [about] finding the good part of what you're doing and keep striving. Don't give up.”