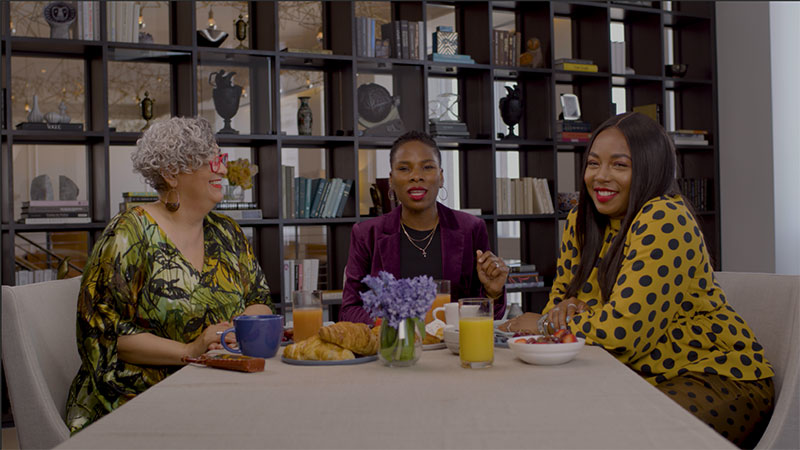 Taking Charge: How to Leverage Credit and Debt to Your Advantage

JPMorgan Chase and Essence sat down with media personalities Luvvie Ajayi and Kela Walker, and financial coach Saundra Davis to chat about their credit journeys and share insight for black women charting their own financial paths.

Taking Charge: How to Leverage Credit and Debt to Your Advantage

Luvvie: This is Currency Conversations. And I’m here with these two amazing ladies. All right, we have Saundra Davis who is the CEO of Sage Financial Solutions.

Luvvie: And then I have Kéla Walker who is a Lifestyle Authority and Media Maven.

Kéla: Yes. We are fierce.

Luvvie: So, we’re going to talk about credit and debt.

Luvvie: Because these are really important things in adulting, in life, and doing all of this right. When was the first time you realized that credit was really important?

Kéla: I think I probably realized it was really important when it was too late.

Kéla: Or not too late, but you know that time you’re like, wait, what? And I first got introduced like to credit, I think, in college when we all see that table in the Student Union.

Kéla: And they are like, come to this free money. And you’re like, yes, money. Free money. Later on, when I started realizing what I’d done with my credit that’s when I realized how important credit is.

Luvvie: For me, it was when I had to get my first apartment. And I didn’t have a credit card up until that point. And they essentially told me, you don’t exist. Because you don’t have credit.

Kéla: You didn’t have any credit, right?

Luvvie: So, what I had to do was my first credit card was a secured credit card. And it’s one of those cards where it’s like, you’re risky as a somebody we have to loan something to. So, put up the money that is the limit of the credit card. So, I put up $500.

The limit was $500. So, I had to spend like six months using this card, paying it off, before I could actually have credit and exist as a person to the system.

Saundra: I too had to start with a secured card. And so you know real smart of them to have a card where you have to pay interest on your own money.

Saundra: Right? So, but the fact is it ended up being OK because it really did help me rebuilt. But here’s the thing to understand. There will be time and things that you do that will cause your credit to dip for a while. That’s not a bad thing if you understand what you’re doing.

And that’s kind of one of the myths. People walk around afraid, well, I don’t want to check my credit score because they, somebody said. Number one, you checking your own credit score never harms your score.

Because you can know where you are and then decide what things do I need to do to increase it? Because there’s a couple of things. You talked about a thin credit file, not having any, so you don’t exist.

Saundra: So, going from no credit to good credit, sometimes it is really a journey. And so, you can learn what to do. I get a little worried when people say negative things about credit and debt, about, you know, stay debt free, no debt, don’t use debt ever.

Because here’s the thing, how many people do you know that would be able to buy a home without debt?

Saundra: How many people do you know that would able to get a car without debt?

Saundra: Or to get to college, or send their kids to college? And so, debt is leverage.

Saundra: And that’s all it is. Now when we treat it as managing our lifestyle that’s when it becomes an issue.

Saundra: But if we are using debt as what it was intended to be—

Saundra: Which is a wealth building tool.

Saundra: You know if we use it that way, debt in and of itself is not bad. It’s how we use it.

Luvvie: Like I’m in debt right now because I have a mortgage. Right?

Kéla: But that’s a good thing.

Luvvie: A lot of people also do the whole keeping up with the Joneses thing.

Luvvie: Of going into debt. Because they trying to slave for the gram. They going on vacations that they can’t afford.

Kéla: They are trying to look the part.

Luvvie: They are trying to look the part. They’re buying bag they can’t afford.

Luvvie: And, honestly, at the end of day, those likes probably didn’t bring in money, so—

Luvvie: What is the point? My nephew turned 12, and on his birthday, his dad was like, what would you like? This dude said, I want an investment account. Hey, I didn’t even know what an investment was.

Luvvie: I was so inspired that this 12-year-old knew this. So, what would you tell your 12-year-old self about credit, about debt, about money?

Kéla: Knowledge is power. And to start early on is really important. So, it would probably just even something as simple like going to open up an account really early.

Saundra: I tell people that as soon as your child can say I want, they’re ready to learn about money.

Luvvie: Hi. How are you?

Luvvie: Do you and your friends talk about money?

Luvvie: Really? What do you talk about?

Chelsea: We talked about investments and stocks and—

Luvvie: You guys are amazing. Teach us something. What tips do you have?

Kéla: What are you investing in?

Chelsea: A lot of materialistic items that you may purchase plummet in value. It is nice to have those shiny new items.

Chelsea: But as you get further and further away from the store, the value just goes down.

Luvvie: You are epic. You are amazing. Well, thank you, Chelsea. Thank you so much for joining this.

Luvvie: I’ve got to do better. What is the one thing you want people to take away if nothing else from this conversation we just had.

Kéla: I mean I want women to just do this, to gather. We go to brunch, and we have these great meals. And we show up, and we show out. Let’s show up and show out. And talk about your debt and your credit with your girlfriends. Be honest.

Saundra: So, for me, start where you are. You know really know what’s important to you. Start with your why and where you are. Take an honest inventory of exactly where you are with your credit and debt right now. And then you can decide what you want to do next.

Luvvie: So, I’m going to give you three ways to start today to better your financial life. So, the first thing is check your credit score. You can use the Chase Credit Journey tool to do that. It’s free. Right?

You want to know where you are in your credit life. And then two, you manage your debt by living under your means. If you have to go in debt for something, let’s say credit card debt, right?

Don’t spend more than you make. Please and thank you. And number three, and really important, we want you to join us and make a commitment and a pledge to just better your financial life.

You go to essence.com/currencyconversations, and join us. We’re trying to get 20,000 black women--

Luvvie: Join us. You got to do it. Y’all are amazing. This was a great conversation.

Q: What were your first experiences with credit?

Walker: I was first introduced to credit in college. We all remember in college, when we saw that table in the student union and they're essentially saying, "Come for this free money!" And you think, "Yes, money!" It wasn't until later, when I started realizing what I had done with my credit, that I knew how important credit was.

Ajayi: When I went to get my first apartment, I hadn't had a credit card at that point. They essentially told me I didn't exist because I didn't have credit. I had to get a secured credit card as my first card. It's one of those cards where you're considered a risk, so you have to put up an amount of your own money as your credit limit. I put up $500 and my limit was $500. I had to spend six months using this card and paying it off before I could have credit and exist as a person to the system.

Davis: I, too, had to start with a secured card, but it ended up being okay because it really did help me rebuild.

Going from no credit to good credit is really a journey. I get a little worried when people say negative things about credit and debt, because here's the thing: how many people do you know who can buy a home without debt? How many can get a car without debt? Or go to college? Or send their kids to college?

Debt is leverage. That's all it is. Now, when we use it to manage our lifestyle, that's when it becomes an issue. But if we're using debt as it was intended to be—as a wealth-building tool—debt in and of itself is not bad.

Q: How can one start the process of figuring out their credit status?

Q: How early should we start learning about credit and debt? Or teaching our children?

Davis: I tell people that as soon as your children can say 'I want," they're ready to learn about money.

Walker: That knowledge is power. And to start early on is really important. It would be probably something as simple as opening a bank account really early.

Q: How can we start the conversation with others about credit and debt?

For me, it's starting where you are and really knowing what's important to you. Start with your why and your where. Take an honest inventory of exactly where you are with your credit and debt right now, and then you can decide what you want to do next.

Q: What immediate tips should people take from this conversation to get started?

Ajayi: Check your credit score. You can use the free Chase Credit Journey tool to do that. Manage your debt by living under your means. And join us at Essence Currency Conversations and make a commitment to better your financial life.