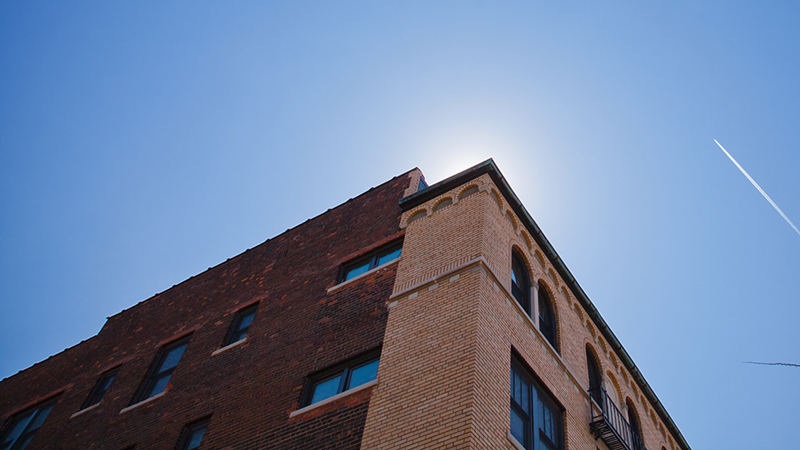 To Build A Home

In Detroit’s Midtown neighborhood, a wave of development is bringing new life to the community and spurring the city’s rebirth.

In recent years, the city of Detroit, Michigan has earned the nickname “America’s Comeback City”—and rightfully so. Detroit’s unemployment rate dropped to 5.3 percent in 2016, down from a high of 19 percent. The poverty rate is now 13.4 percent, a full point below the national average. This transformation is proving that America’s industry cities can move forward and thrive as the economy evolves.

Through private sector investments, including an expected $150 million commitment from JPMorgan Chase by 2019, and collaboration with the public sector, the city is rebuilding from the ground up, and revitalization is coming faster than anyone could have imagined when the city filed for bankruptcy in 2013. The city is creating more reasons for locals to stay while also attracting new residents, a combination that is stabilizing and growing the local economy. The Midtown neighborhood has bounced back particularly quickly: adding nearly 150 new businesses and 1,500 new residents since 2013. More than 50,000 people now work in the area—and through new developments projects, many are starting to live there, too. 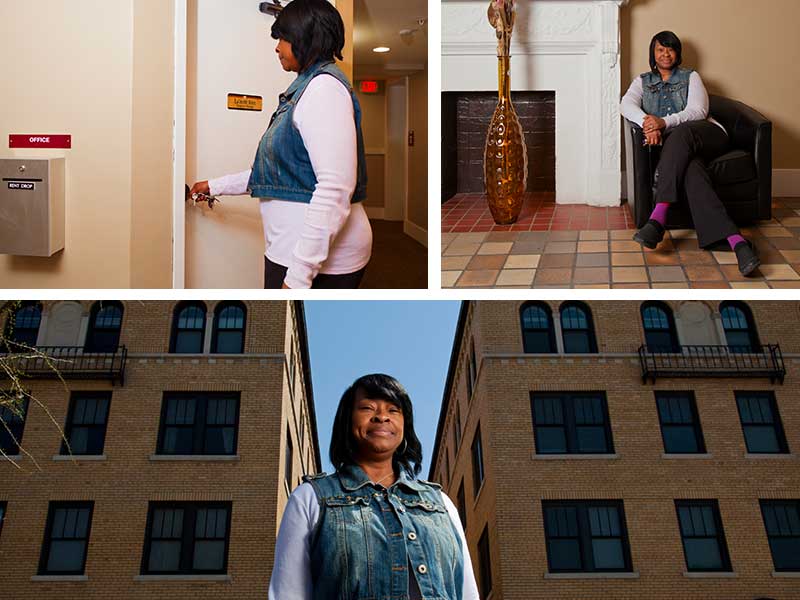 As recently as 2014, 30 percent of Detroit’s residential buildings stood vacant or only partially occupied. A 1920s-era, 56-unit building on Alexandrine Street was one of them—about 40 percent occupied, partly by squatters who didn’t pay rent. The rest of the units were uninhabitable, with crumbling walls and long-outdated plumbing and wiring. “It was almost a detriment to the community,” says Jacob Horner, a vice president at PK Development, the firm that undertook the renovation. “The fourth floor had such extensive water damage, it was uninhabitable.”

PK completed a gut renovation of Rainer Court in just 18 months, a pace made possible by a $6 million investment from JPMorgan Chase. Now, the 19th century masonry is once again an ode to the neighborhood’s storied past.

Financing for community development leveraged from outside investors, thanks to JPMorgan Chase capital:

A repaired skylight sends light streaming into the lobby, and its 36 new apartments feature much more than a fresh coat of paint. “They are blown away,” property manager La’Nore Rice says of her tenants, most of whom previously lived within a five-mile radius and yet had never seen a transformation like the one at Rainer Court.

Just three months after reopening in September 2015, the building was already close to full occupancy. Now, the entire neighborhood is at 98-percent occupancy. It’s a welcome change from 2014, and Rice is looking forward to seeing what new growth Rainer Court’s renovation and other investments bring to her long-neglected block. “It’s getting better,” she says, “and it’s going to continue to get better—but I’d like to see it stay that way.” 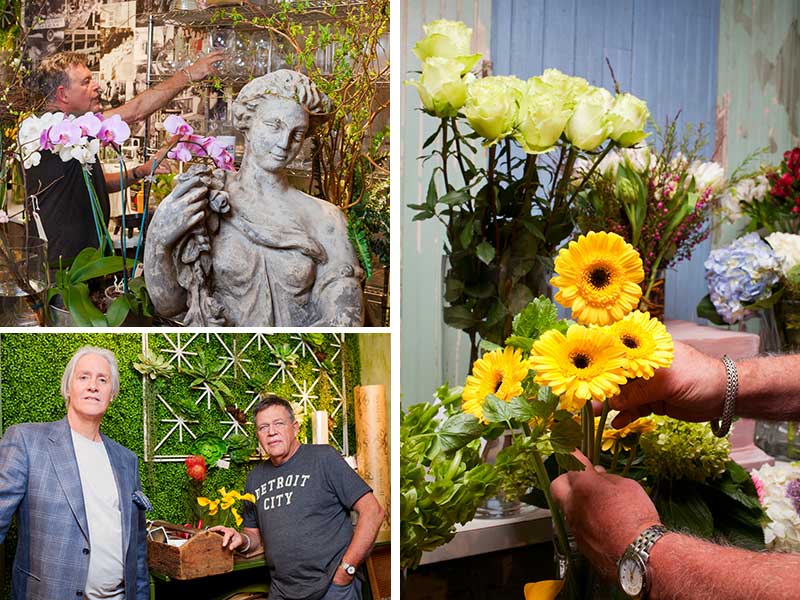 When Norman Silk and Dale Morgan opened their flower shop Blossoms in the late 1970s along a stretch of Third Avenue not far from Rainer Court, the area was part of the red light district. Nonetheless, Blossoms built up a loyal following, from neighborhood regulars to the board and patrons of the nearby symphony hall.

Over time, though, Midtown’s rising crime and the city’s economic distress made it hard to keep employees—and harder still to find willing new ones. “When they heard it was in Midtown, they’d say, ‘Oh no, I’m not working there,’” Norm recalls. Eventually Blossoms left Third Avenue for a suburb, a move many businesses were taking by the early 1990s.

Norm kept close tabs on Detroit as the city’s revival took hold, and especially when the buzz started to focus on Midtown. “That’s when we started thinking about coming back,” he says. This year, he turned that thought into action. Blossoms reopened on Third Avenue in August 2016, shortly after the renovated Rainer Court started leasing new units and the neighborhood started drawing in new coffee shops, groceries, and retail stores—all within walking distance, in a neighborhood where walking wasn’t even safe just a few years before.

The biggest change, though, is who comes through the door. Lots of Blossoms’ clientele are regulars and long-time Detroiters, some from local families spanning three generations, but new customers come in every day, recently including a few residents of Rainer Court who came in looking for wedding bouquets

Blossoms’ new-old neighborhood is a community now, he says, and he thinks that sense of home will anchor the neighborhood into the indefinite future. “You walk up and down this block, and these places are owned by real people,” he says. “This neighborhood is authentic, and it’s real.” 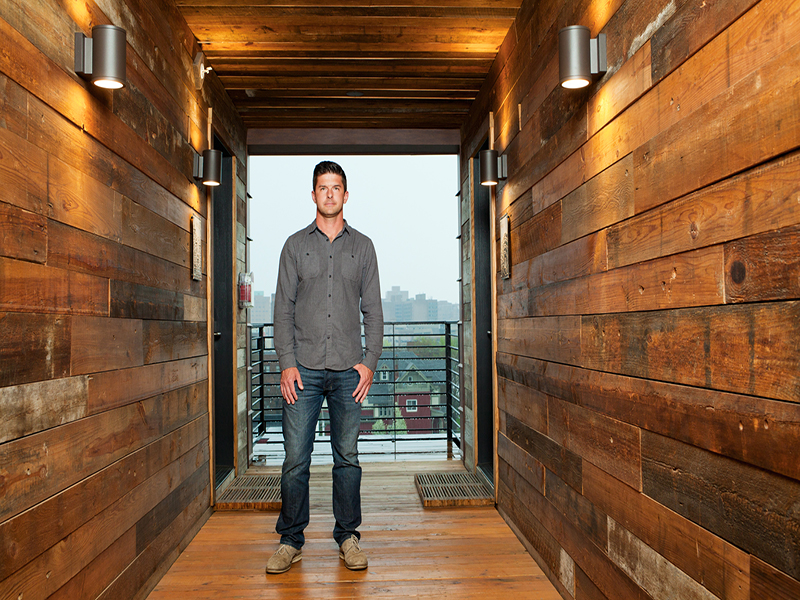 Much like Rainer Court, the 19th-century Victorian building on the opposite corner of Third Avenue and Alexandrine was also unoccupied and showing its age by 2014. But with so many new businesses opening and development plans cropping up, neighborhood veteran Jason Peet saw an opportunity. All of these new residents would likely have family and friends coming to visit, and these new businesses would attract new customers. Surely, they’d need somewhere to stay—why not provide that right within the neighborhood?

In 2016, after extensive renovation, the once-crumbling Victorian reopened as the El Moore. It serves now as half hotel, half residential apartments. In the morning, as hotel guests and residents share breakfast in the parlor, those conversations turn into recommendations—and sometimes even invitations to explore Detroit together.

That’s exactly the effect Jason hoped the renovation would have. “It’s so important that each project not only take care of that building,” he says, “but also start to stitch communities back together.” Before Rainer Court and the El Moore were renovated, he recalls, “there was no one out on the street. Now people will pass each other, stop, have a conversation. Having those gatekeeper buildings makes that happen.”

Mid-sentence, Jason had to excuse himself to answer his phone. The caller turned out to be a resident of Rainer Court, looking to book a hotel stay for her father, who would soon be visiting from Spain. “Those visitors will go home and talk to other people about their experience in Detroit,” he said later. “Being able to share that with people starts to break down a lot of barriers.”

Annual visitors to the Midtown area:

helping create or preserve more than 700 units of housing

Changing the perception of Detroit starts here, on this block, he says, with the “passion and hope” he saw in the new neighborhood’s residents when he first arrived. “It’s always been here,” he says, “it’s just getting people comfortable enough to experience it.” 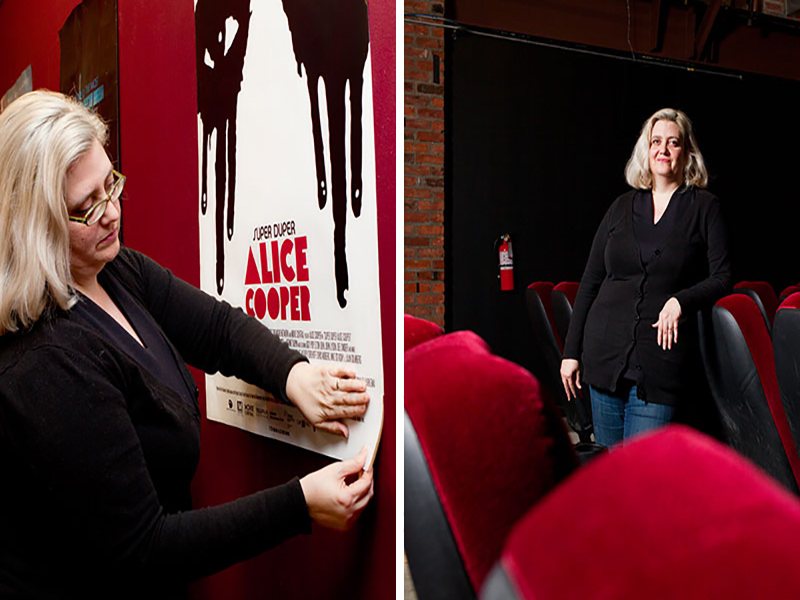 Paula Guthat and her husband, Tim, moved Cinema Detroit from elsewhere in Midtown after noticing new blips of activity west of the Cass Corridor, including Rainer Court’s renovation. The theater is the only one in Midtown open seven days a week, and, not coincidentally, the Guthats chose a location just down the block from Rainer Court.

“Just by virtue of more people living here, we have a greater customer base to draw from,” Paula explains, and as a new expression of community spirit, the theater inspires customer loyalty. Some regulars, including a couple at Rainer Court, stop in after work just to buy popcorn and chat. “Someone said to me, ‘I feel like you’re inviting us into your house,’” she recalls. “That’s why we’re here, for this neighborhood.” Building by building and block by block, Detroiters are “starting to see ourselves in a different, better way,” she says. “I think that’s the first step.”

providing support and assistance for more than 1800 small businesses 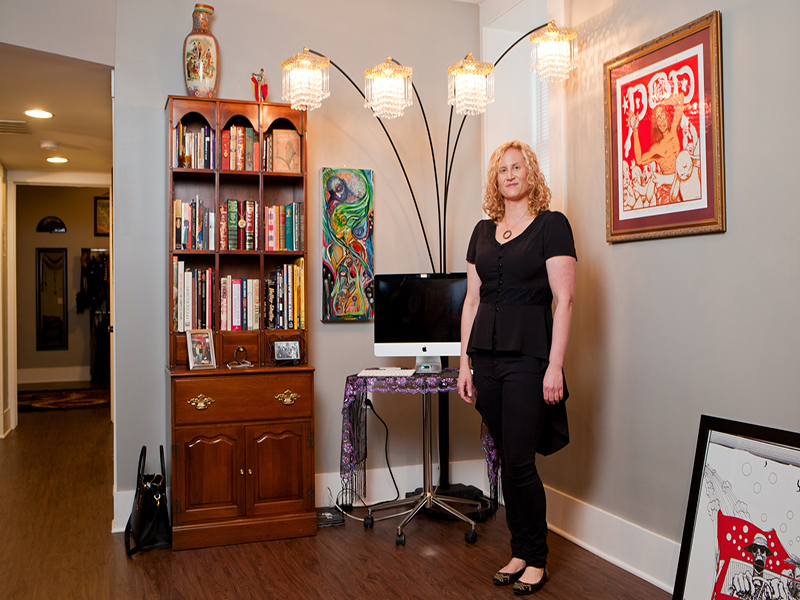 Having lived there for only a week, Rachel Darling is Rainer Court’s newest face, but she’s no stranger to Detroit. She’s been coming to the city for years, drawn by her love of techno music, Detroit’s latest musical specialty. She’s been attending the Movement music festival here since 2012, and each visit let her mark the city’s changes.

“Restaurants started getting better, the hotels started to be built up,” she says, and she was drawn most of all by “how nice people are here.”

Add the new M-1 train and a forthcoming bike share, and it’s easy to see why Rachel followed Detroit’s siren call all the way from Chicago. About a quarter of people who signed new leases in Midtown in 2016 were transplants from other cities, states, or countries, some of them seeking the new jobs in this flourishing neighborhood. Rachel landed a job as a tax advisor, a job that would have been exceedingly rare in this neighborhood before 2014.

Rainer Court sold itself. She showed up without an appointment, fell in love, and signed for her unit on the spot. Her new job started five days later. After a week, she’s already figured out how to contribute to her new city, volunteering in the public schools and helping to bring techno, the passion that first brought her here, to the music venues of Midtown.

“I’m itching to give back to the community,” she says, adding that the scope of projects happening across Detroit “makes you want to be immersed in the city that much more.”

Detroit’s boom doesn’t seem to be slowing anytime soon: In 2016 alone, the city opened 110 development sites in greater downtown. With each new development, says Paula, the excitement was coupled with a “tinge of worry” among regulars that they could soon be pushed out. Even Rachel couldn’t believe her luck with Rainer Court; she’s outpriced on most of Alexandrine Street. Property in Detroit now sells for 30 percent more than it did in the wake of the recession.

Sue Mosey of Midtown Detroit Inc. helps manage the neighborhood’s balance of old and new residents through two initiatives: “Live Midtown” offers subsidies to employees of Midtown businesses who want to move to the area, and “Stay Midtown” does the same for residents who are spending a third of their income or more on housing.

As of mid-April, Stay Midtown’s pilot program had raised enough money from institutions and non-profits to subsidize 50 households, half its ultimate goal.

Extending and stabilizing new neighborhoods while sustaining community spirit is how projects such as Rainer Court have made a difference to Detroit’s overall rebound, says Jacob Horner of PK Development. With enough resources and commitment, developments throughout the neighborhood will keep raising the bar, making for a community with a sense of family and a city that feels like home.

As part of an expected $150 million philanthropic investment in the city of Detroit by 2019, JPMorgan Chase supports Rainer Court and similar projects that contribute to the city’s revitalization. Emphasizing neighborhood stabilization as part of that recovery, the company’s targeted lending helps launch development and infrastructure projects, grow new and existing small businesses, and support community nonprofits and organizations. JPMorgan Chase’s continued commitment to Detroit has helped the company refine and reimagine its commitment to the city – leading to the creation of a new corporate responsibility model designed to create impact by focusing on some of the crucial drivers of inclusive growth: workforce training, small business development, financial health, and neighborhood revitalization. Learn more about JPMorgan Chase’s model here.