A Mission to New Orleans

How skilled volunteering is helping nonprofits increase their impact.

Nonprofit organizations depend on donor support to help communities and people in need. Most of their funding is rightly dedicated directly to the causes and people they serve, which leaves very little to boost internal operations. Seeing the opportunity to help nonprofits maximize their potential, JPMorgan Chase created a program called Service Corps.

The program, which has been deployed in Detroit and Johannesburg, dispatches top employees from around the world to work with nonprofits. They share otherwise costly, expert advice on ways to increase the power of the nonprofits’ community impact, a practice known as skill-based volunteering. The power of the program lies not only in the positive impact for the nonprofits, but also for the employees who relish the opportunity to volunteer their time and expertise to help communities in need.

This spring, the Service Corps traveled south to work with a consortium of nonprofits and help improve the prospects for the unemployed and undereducated “opportunity youth” of New Orleans. Sixteen volunteers, from three different countries moved in for three weeks of focused partnership and problem-solving.

The first step for the skilled volunteers was to understand the depth of the challenges facing New Orleans. 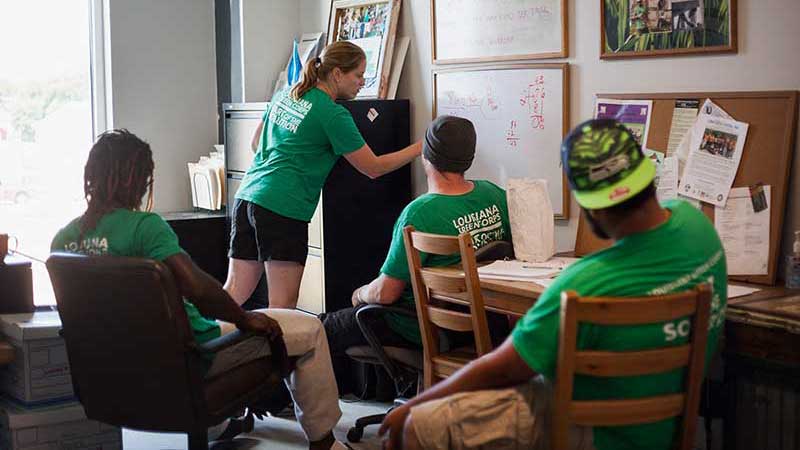 Four of the New Orleans Service Corps members worked with a group of 30 nonprofits known collectively as EMPLOY, all of them focused on helping the city's 26,000 opportunity youth. Many EMPLOY-supported programs offer basic skills and job-training, including the math class shown here. The Service Corps members dedicated much of their first week to understanding the issues, and they found the young people they spoke to highly motivated and grateful for the help. “There’s a lot of young people really trying, they just don’t have the connections,” said Michael Harrell, a recent graduate of one EMPLOY-supported program, who spoke with Service Corps members at a focus-group discussion. “Having these conversations is going to help the city so much.” Kyra Haywood is an intern in the EMPLOY office and helped orient the Service Corps team to the kinds of problems she and her classmates have faced. After Hurricane Katrina destroyed her family’s home, she had to move countless times as a child and fell behind in school. She graduated late after returning to New Orleans, and it was Matt Feigenbaum, one of her former teachers, who steered her to a skills training program at EMPLOY, where he had started to work himself. They work in the same office now, and he remains a mentor. 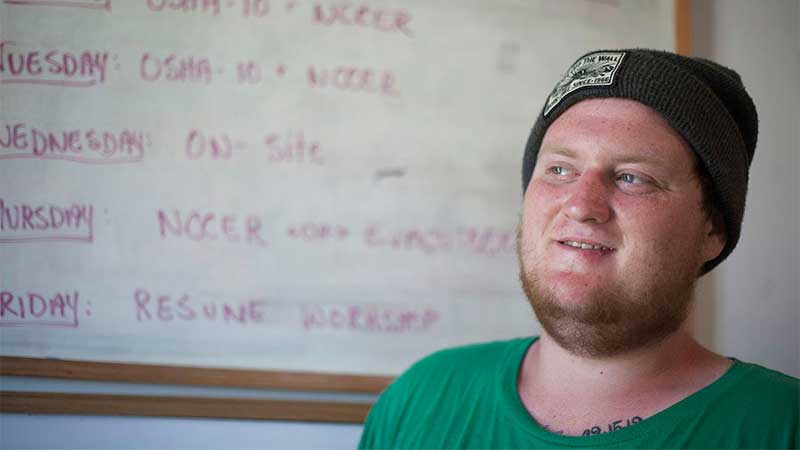 Despite their best efforts, many of the nonprofit training programs rarely fill every seat. Some of the nonprofit leaders go door to door in low-income neighborhoods in an attempt to attract students. The Service Corps members quickly realized that they would need to add best practices for outreach to their recommendations for EMPLOY. Chase heard about an EMPLOY-supported training program at the homeless shelter where he is staying. “It was hard at first. Sitting in the classroom I think, ‘This is the reason I dropped out of high school,’” he said of his first few days in the training program. Asked what inspired him to see it through, he replied, “I want to finish something for once in my life.”

After hosting several focus groups with stakeholders, the Service Corps started developing a strategic plan for the EMPLOY collaborative. The Service Corps team was tasked with creating a strategic plan to help EMPLOY better engage and encourage potential employers to hire and retain opportunity youth. “What's made our team very effective is everyone understood early on what our strengths are,” said JPMorgan Chase Executive Director Kevin P., who is based in Irvine, California. Victoria B. felt that her internal consulting role on the JPMorgan Asset Management Strategy and Process-Improvement team prepared her well for the task. “This is, from a structural standpoint, maybe 90 percent similar to my day job but applied to a whole new universe that I knew basically nothing about,” she said. Regina H. too saw similarities to her daily responsibilities as a vice president and program manager in the Chase Columbus, Ohio office. “I have to get people to want to talk to me, open up to me, do things for me,” she explained. “Here, we can brainstorm for days, but there's a time when you have to make a decision and let's move on. That's the project manager in me that tends to come out.” 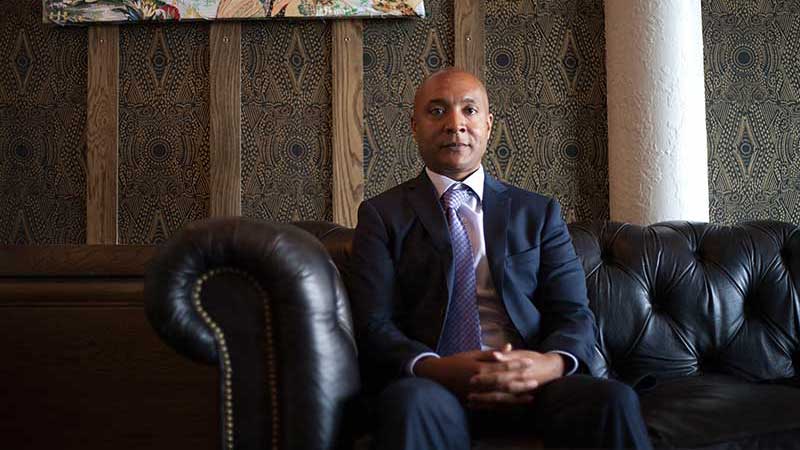 JPMorgan Chase Executive Director Kevin P. personally understands how mentorship programs can shape the course of a young person’s life. Growing up in a single-parent household in the L.A. area, he was part of eight mentorship programs, and he credits his successful career to those programs. In New Orleans, he applied his sales expertise as he helped EMPLOY reshape the way it pitches itself to businesses around the city. Don’t pull at the business owner’s heartstrings, he advised - instead, rely on data. If just one percent of the opportunity youth population - that’s 260 young people - land jobs and become self-sufficient adults, the city will see an estimated $20 million economic impact. Helping these youths “is not a hand out,” Kevin says. “It’s a hand up.” 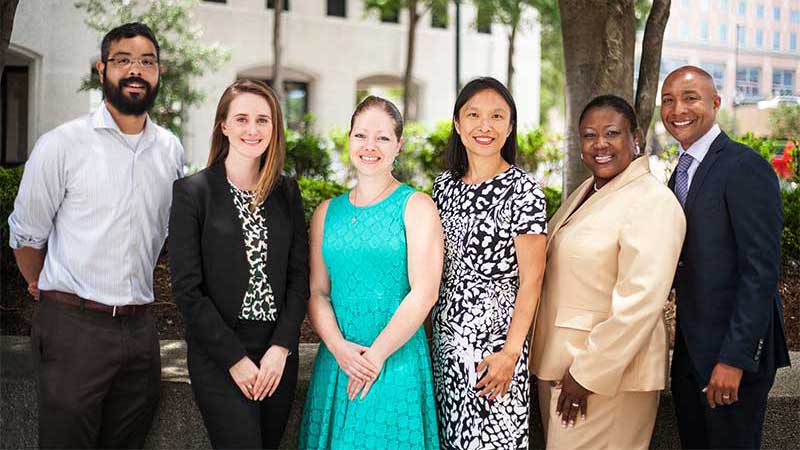 “Coming from a very different region, a different culture, the thing that struck me most was just how deep the problem is, and what a challenge it is to even look at attacking it,” said JPMorgan Chase Executive Director Anessa C., who is based in Hong Kong. “There are so many places you can start, there’s so much to do.” The Service Corps team discovered that one of the issues EMPLOY faces is that many of the associated nonprofits approach the same potential employers. In a city where the majority of businesses are small and do not have jobs to offer on a consistent basis, that is perhaps their toughest issue. The Service Corps’ recommendation was that they centralize employer outreach in EMPLOY. They also determined that the youth need on-going support even after they find employment, and employers need support in understanding the unique challenges they have faced. 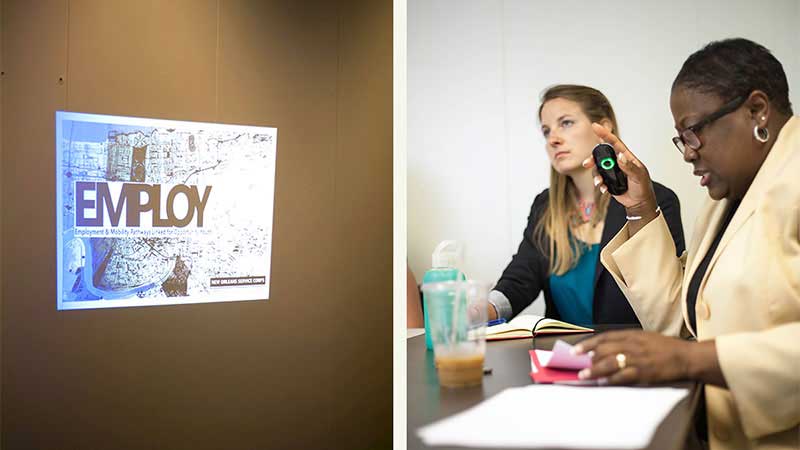 At the end of their three dedicated weeks in New Orleans, the Service Corps team presented its recommendations to EMPLOY's leaders. The employer-engagement plan they developed included a litmus test for potential employers as well as the nonprofits that are part of EMPLOY. Are the employers really ready to set these youths up for success? And are the services the nonprofits provide really driving change? These are the main questions EMPLOY should be focusing on, the Service Corps concluded. “We've been able to break down things into their component parts and say, 'You need to get this done, first and foremost. Once you do this, you can do that,'” explained Victoria B.. ”That's the kind of thing that four extra minds dedicated to something for three weeks can help facilitate.”

“In the nonprofit world you pedal really, really hard and there’s so little time for strategy. But you need to make that time,” EMPLOY Senior Program Manager Nicole Jolly said as the Service Corps’ time in New Orleans came to an end. “Working on the collaborative itself is a crucial part of this. That they're really giving us a package that we can just take and run with is phenomenal. They really synthesized so much.” The end goal for the Service Corps members is that their recommendations will help EMPLOY better serve New Orleans’ opportunity youth—the young men and women like Kyra H. who have prevailed over hard times and dream of making a better life for themselves. “What might work in other states and in other environments may not work here," said JPMorgan Chase’s Anessa C. "Our recommendations are very much tailored to what we've seen over the three weeks. If we increased EMPLOY’s capacity to help the organizations even the slightest bit, then this has been a success.”