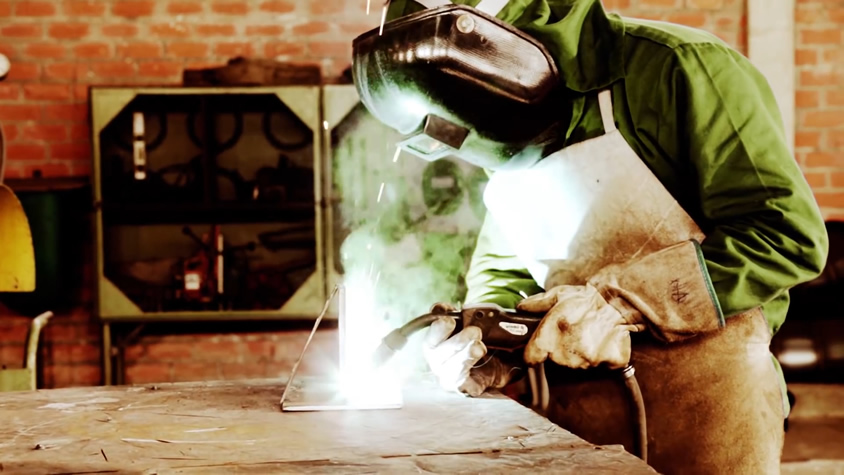 The skills gap isn´t uniform. It´s a national problem, but it has real regional implications. It plays out differently across the country.

HARVEY: The skills gap originates from the fact that our economy here in Houston is growing as fast as it is, when you have one of the, you know, fastest-growing economies in the country, and that´s creating a real shortage of these middle-skill jobs, and it´s particularly acute in the petrochemical area.

The middle skills are those jobs that require more than a high school education, but less than a 4-year college degree.

And, in Houston, that´s about 1.4 million; about 40% of our jobs in Houston fall in this middle-skill category.

We have 9 community colleges in this region.

One of them is San Jacinto College.

Text On Screen: The Plant Lab

INSTRUCTOR: We´re at 17, opening the steam-discharge valve on the boiler.

HARVEY: It´s a very effective program on the east side of Harris County, right alongside the petrochemical industry, so there´s no better system to really connect young people with these jobs.

PARKS: We have a skills gap of about 855,000 people that are missing, as far as not having the right skills and the right credentials for jobs that are available in the area, but what we´re trying to do is meet that challenge.

We´re trying to graduate as many students as possible to get the credentials that they need to be successful in the workforce today.

INSTRUCTOR: You´re at 35 and holding, so keep on going.

HARVEY: So what San Jacinto has done is really bring the manufacturing setting, the petrochemical setting, right into the classroom,

PARKS: With our advisory committees that we have, with our employers and our industry people, we meet on a quarterly basis to talk about what is necessary to keep the curriculum current, to meet the skills that their particular industry is looking for.

MAURISSIA: Well, I feel like I´ll walk out of here with a degree and get a highpaying career, not just a job. You´re looking at healthcare, a great salary, a longlasting career, so that´s what I plan on doing.

Every day we hear about the strains on the U.S. economy and the struggles millions face in securing a job. In the U.S., there are about nine million people who are unemployed, while millions of jobs continue to go unfilled.1 The skills gap—where not enough trained workers have the skills needed to fill available jobs—contributes significantly to that problem and continues to be a major disconnect between people looking for work and people hiring.

In Houston, Texas, there is particularly acute gap. While the Houston metro area boasts one of the fastest growing economies in the U.S., nearly 855,000 Houstonians aged 25 and older do not have the minimum credentials for middle skills jobs.2

Q: How significant is the skills gap in Houston?

A: Bob Harvey: Right now there's a tremendous skills gap in Houston. The skills gap originates from the fact that our economy here in Houston is one of the fastest growing economies in the country, and that's creating a real surplus of the middle skill jobs without the human capital to fill those positions.3 As we define it, middle skills jobs are those jobs that require more than a high school education but less than a four year college degree, and they require some training, some education beyond high school. In Houston that's about 1.4 million jobs.4

A: Bob Harvey: Unfortunately, if we don't address the skill gaps, there is a possibility that our local economic growth will slow or even halt. You can't grow an economy without building jobs and attracting skilled workers to fill those jobs. In Houston, we'd like to attract and train those workers locally in order to sustain our communities and keep our economy moving forward.

Q: Does the skills gap in Houston affect specific industries more than others?

A: Bob Harvey: We often talk about the Houston economy as being comprised of seven different sectors: advanced manufacturing and technology, aerospace and aviation, biotechnology and life sciences, distribution and logistics, energy, education and corporate headquarters. Virtually all of these sectors require middle skill workers, so we are seeing the skills gap throughout all of our major industries. For example, when you think of the life sciences industry, all medical establishments — hospitals, labs and doctor's offices — require technicians of all different sorts. The same is true for the manufacturing, oil and gas, and petrochemical industries in Houston.

The lack of middle skill workers is acute in the petrochemical area here. We have a huge construction program underway along the Houston Ship Channel and, in fact, along the entire Gulf Coast to build the petrochemical facilities to take advantage of the supply of natural gas and crude coming on from the shale plate.

Q: What is your organization, the Greater Houston Partnership, doing to address the skills gap?

A: Bob Harvey: About two years ago, the Greater Houston Partnership began to hear from the local business community that we had this growing shortage of middle skill workers. We convened a task force in 2013 to bring all sectors of the Houston region together to talk about the issue, to delve into it.

Based on our findings from 2013, we launched a new program in 2014, called UpSkill Houston to really turn that discussion into an actionable program. So far, UpSkill Houston represents three of Houston’s seven industry sectors and we intend to launch the other four soon. We are collecting data in the field and are working with all nine community colleges in the Houston area. Together, the business community, the education community and local government are working to build training programs that match the needs of local business and will get us started on filling the available jobs in our region.

Q: What are some specific examples of programs that work to address the skills gap in Houston?

A: Bob Harvey: One very effective program is currently taking place at San Jacinto College, on the east side of Harris County, alongside the petrochemical industry. San Jacinto College has begun offering students effective, informed training programs in the industries that surround its campus. The college essentially brought the manufacturing setting and the petrochemical setting right into the classroom so students are being trained and working on real equipment and have the ability to see what the job would look and feel like.

The program at San Jacinto College is immensely beneficial for students, but at the same time, it is a great opportunity for local industry to participate in the training of its future employees. The college frequently brings members of industry into the classroom to interact with students, to ensure the training is appropriate for the entry-level positions available, and perhaps most importantly, to help students see how these positions can lead to successful, lucrative and stable careers. 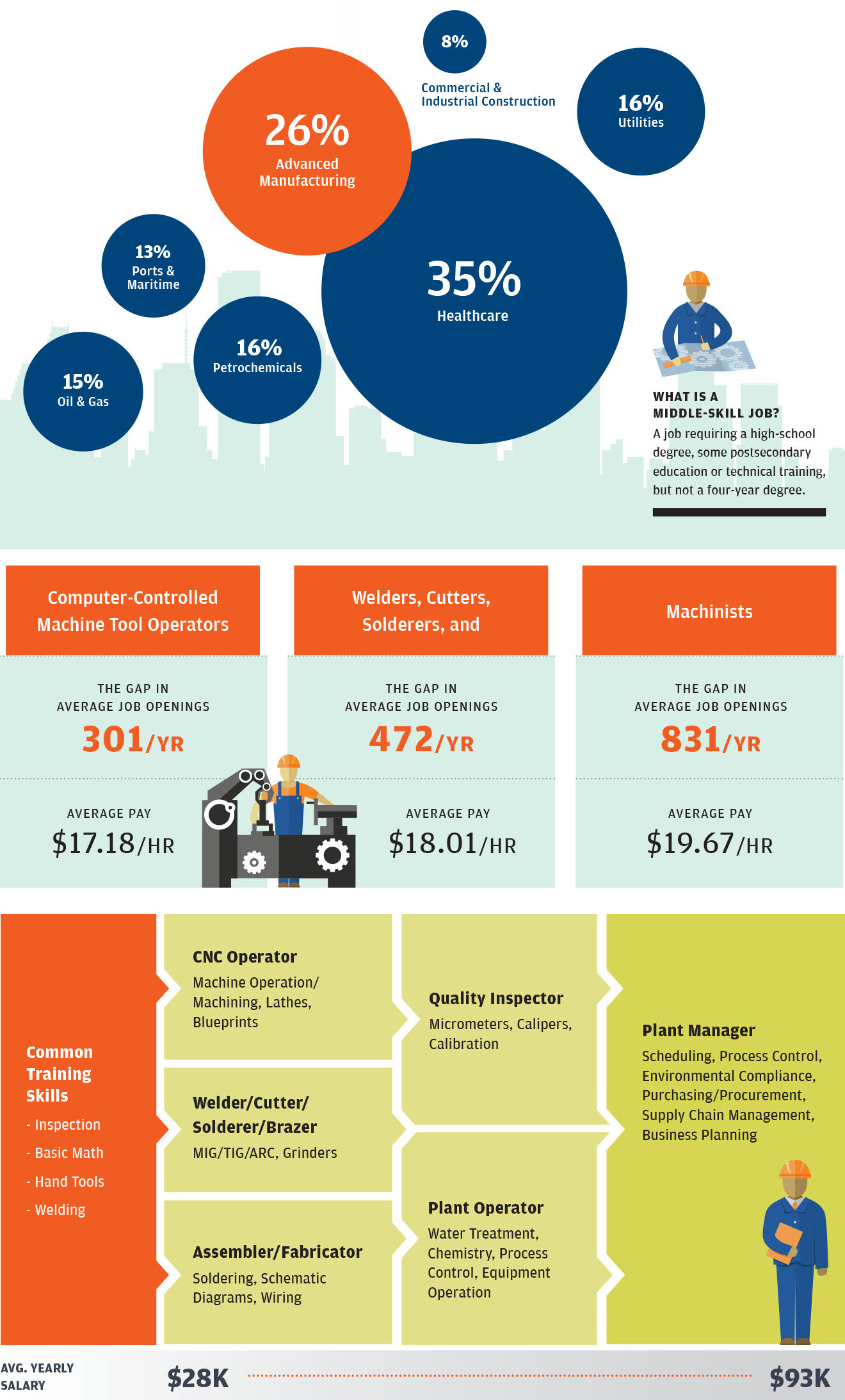 WHAT IS A MIDDLE-SKILL JOB?

A job requiring high-school degree, some postsecondary education or technical training, but not a four-year degree.