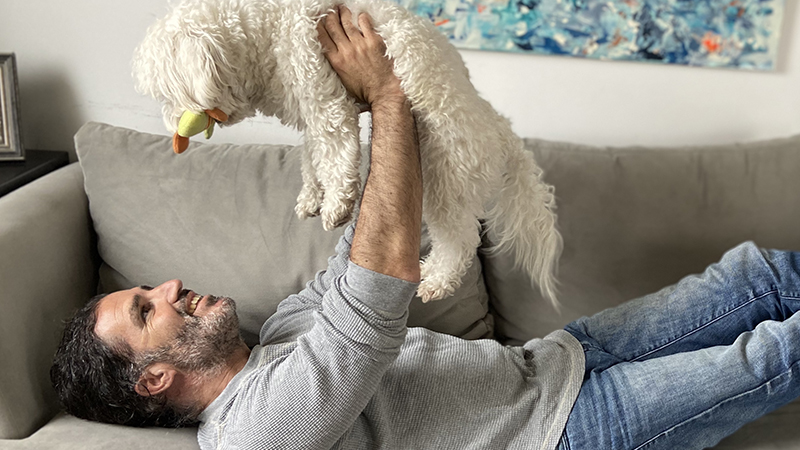 How an Employee with a Different Perspective Helped Make Me a Better Manager: Mariano's Story

Argentina-based Mariano Garcia shares how working with a colleague on the spectrum made him a better manager and a keen ally of workforce neurodiversity.

When Mariano Garcia found out that Sol Gonzalez was joining his Workforce Technology Services development team at JPMorgan Chase, he didn't know what to expect.

The Buenos-Aires-based software developer and support team manager had never supervised an employee with autism — and he had a lot of questions. Would it change the way he had to hold meetings? Would he have to change his management style? And how would the new employee fit into his office's busy workplace atmosphere?

Fortunately, his company was ready to help. Autism at Work, a JPMorgan Chase program, helped Garcia understand more about neurodiversity, address common misunderstandings and make his office a more supportive and inclusive place.

Gonzalez joined Garcia's team as a software developer, where she focused on a programming language known as “Scripting." She was tasked with navigating a large, often confusing database that required an intimate understanding of the data it contained and—more importantly—the ability to ask the right questions in order to get the most useful and insightful answers.

Garcia was quickly impressed by Gonzalez' abilities. “Sol performs data management analytics and reporting that requires unique skills and a level of focus and abstraction that not everyone is up for," he said. “She creates fast, sophisticated ad hoc reports that have been very valuable for the team."

And Garcia isn't the only one who's noticed. “Sol has the capacity to continually ask herself 'why,'" a colleague remarks. “When something does not quite fit, she goes back and rechecks, rethinks and finds other ways until she gets it right. Even when it is right, she challenges herself to make it even better."

Lessons for the Whole Office

But while Gonzalez's skills were vitally needed, the transition to a more inclusive office wasn't all easy: She suffers from hyperacusis, an increased sensitivity to sound that can make traditional meetings—even one-on-one discussions—painful.

“At first I was nervous about telling them I needed the meetings being held by telepresence or asking the attendees to use a lower voice tone," Gonzalez says. “But they were really attentive with that, so that every day at work really is smoother for me sensory-wise. We continue improving and actively finding better ways to work together."

Garcia discovered ways he could improve, too. “Because I might speak too fast, or give four ideas in one block, I started to notice that not all of the ideas were reaching Sol," he says.

He soon realized that the issue was his own communications style. “I was always jumping from one topic to another, changing subjects without closing the previous one or wrapping up an idea before moving onto the next," he recalls. “I never thought about this until she pointed it out."

Searching for solutions, Garcia took a hard look at his own managerial style and realized that he needed to adapt to fit all ways of learning and understanding.

“Having to adapt my communications made me a better listener and much more effective with my teams," he recalls. “Specifically, it has helped me with my one-on-one interactions—and that is something you're not going to learn in a typical training class."

By structuring his ideas to highlight details and avoid assumptions, Garcia found himself rewriting old habits. He thought he was changing to help Gonzalez, but he soon realized that his changes were benefitting his whole team.

“Today the conversations happen in much more orderly fashion and we never end a meeting with loose ends," he says. “This was a win for both Sol and I in terms of productivity. By applying it to the rest of the team, the winning multiplies exponentially."

An Impact that Goes Beyond the Office

“I had jobs where I didn't feel I could tell my previous employers I was on the spectrum without putting my position at risk," she says. “Mariano stayed open and listened to me about how I would be more comfortable in the workplace. He and my colleagues make sure I get to the same objective, no matter the path."

While Gonzalez excels at her individual responsibilities, Garcia believes that her contributions to his team represent a key milestone in the growing awareness of autism in the workplace in Argentina.

“I think that, for many of us not directly involved, the topic was not on the table until JPMorgan Chase began playing a key role in this," he says.

Garcia soon learned that being a supportive manager to employees on the spectrum meant extending his efforts outside the office. Promoting neurodiversity also requires managers to serve as supportive allies, he says, noting that they're key to combatting the myths and stereotypes surrounding autism. He learned how powerful the stereotypes could be when he talked to his friends and family about Gonzalez' impressive work.

“When I told them she was on the spectrum, they said 'I didn't know that kind of inclusivity existed in companies,'" he recalls.

Gonzalez says her experiences have changed the way she views neurodiversity. “I feel different about the word 'disability' now," she says. “I no longer think a person has a disability—I think that, in a supportive and empathetic environment that assumes everyone is different, there is no disability at all—no matter the label some of us may have received."

As Autism at Work continues to foster an inclusive and supportive organizational culture, Garcia envisions a workplace where universally accessible hiring practices and work environments are the norm.

“I would like to see a framework in place for us as managers to be able to hire people on the spectrum without needing a separate program like Autism at Work," Garcia says. “I hope this becomes business as usual for us."