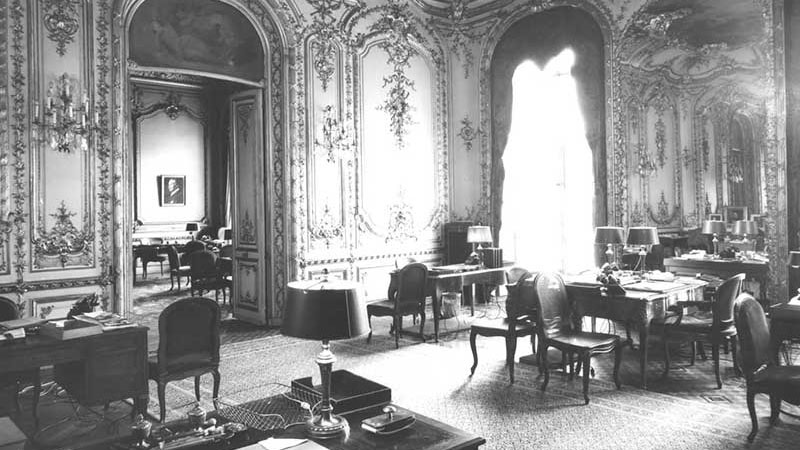 A House of Finance in Historic Place Vendôme

With nearly 150 years in Paris, J.P. Morgan stands as one of the longest operating American banks in the country.

Few financial firms boast a more historic setting than that of the Paris office of J.P. Morgan at 14, Place Vendôme. 2016 marks the 100th anniversary of the purchase of the landmark building by the Morgan firm – it has remained our French headquarters ever since.

Designed in the late 17th century as a magnificent plaza, Place Vendôme has served as home to affluent Europeans, government agencies, financial institutions and global businesses alike. Over the years, J.P. Morgan has shared the square with the French Ministry of Justice, the Hotel Ritz, Cartier, and IBM.

In 1685, King Louis XIV purchased property just north of the Tuileries Palace with the intent of building a public square designed to glorify his reign. The final design called for an octagonal plaza surrounded by private townhouses, or hotels particuliers. Only the facades were to be built, with construction to accompany the purchase of each lot. In the center would stand an immense bronze equestrian statue of King Louis XIV, unveiled in 1699 to garner enthusiasm for the ambitious undertaking.

Plots were purchased by well-heeled Europeans. With the completion of the final townhouse in 1720, the square transformed into a hub of social activity. Royal wedding celebrations and public fairs filled Place Vendôme, then called Place Louis-le-Grand, with revelry. The tide, however, would soon turn as discontent spread throughout the monarchy. Just two days before the storming of the Bastille on July 14, 1789, a frenzied mob formed at Place Louis-le-Grand. During the ensuing Revolution, the plaza served as the site of public beheadings, parades and protests. In August 1792, a mob destroyed the statue of King Louis XIV. 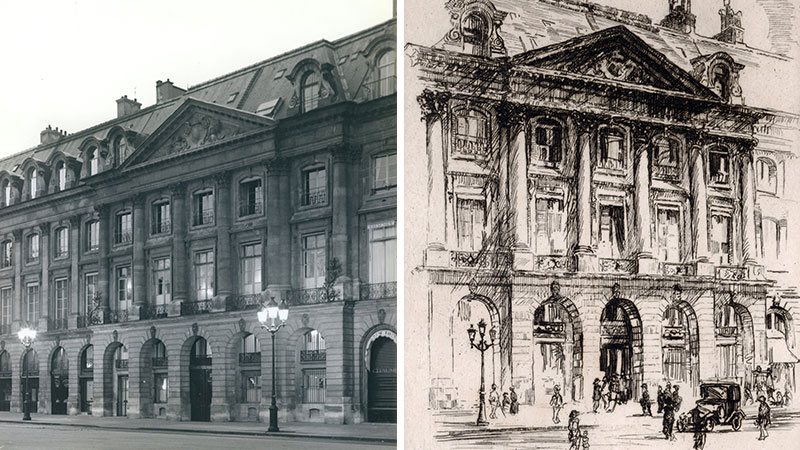 The end of the Revolution and the turn of the 19th century brought a renewed sense of peace to the square. Within time, the plaza became one of the most celebrated squares in Paris.

By the early 20th century, banks, jewelers and government offices began to replace the private residences encircling the plaza. In September 1916, Morgan, Harjes & Co., a JP Morgan Chase predecessor, purchased 14, Place Vendôme to serve as the firm’s French headquarters. The firm bought the building from the family of the Vicomtesse de Trédern, a respected singer who hosted an intimate salon in the building attended by some of the world’s most well-known literary, artistic and political figures of the day.

The building’s façade is a landmarked historical monument, as are some of the ceilings of the reception rooms on the first floor. In 1993, a full-scale renovation of the building modernized its infrastructure and restored many of the architectural and decorative elements unique to the original construction. Current renovation on the building will help to preserve its grandeur well into the 21st century.

But the history of J.P. Morgan in France dates back nearly half a century before the firm purchased its celebrated location on Place Vendôme in 1916. In 1868, the firm’s earliest predecessor in Paris opened as Drexel, Harjes & Co., a banking firm run by Anthony Drexel whom J. Pierpont Morgan would later partner with in New York.

In 1870, Drexel, Harjes & Co. developed a relationship with Pierpont’s father, Junius Morgan, when it assisted with the transfer of funds for Junius’ $50 million loan to the French government during the Franco-Prussian War. One year later, Anthony Drexel and Pierpont Morgan would establish a merchant bank in New York called Drexel, Morgan & Co., later renamed J.P. Morgan & Co.

In 1895, two years after Drexel’s death, J.P. Morgan & Co. assumed full control of Drexel, Harjes in Paris and renamed the firm Morgan Harjes & Co., with Pierpont Morgan as its senior partner. As the firm approaches 150 years in Paris, J.P. Morgan stands as one of the longest continuously operating American banks in the country.