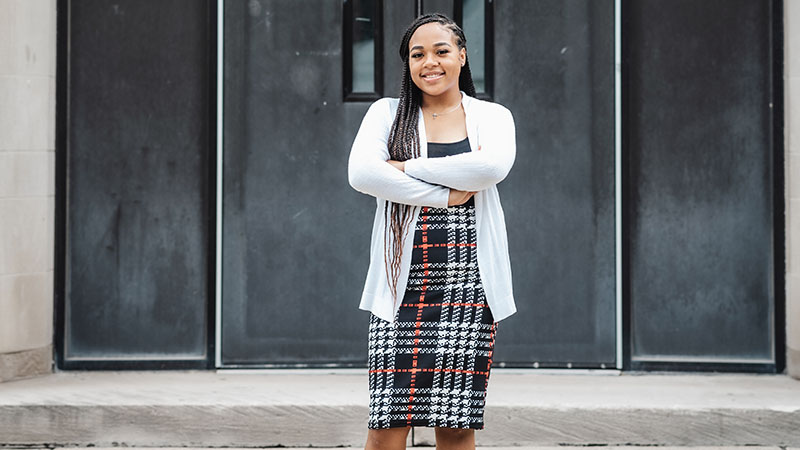 Finding a Path to Adulthood

Destynee Nixon works at an afterschool program that once set her on the track to success. With the help of funding from JPMorgan Chase, she's helping a new generation of children find their futures.

In 2015, when she was a senior in high school, Destynee Nixon used to follow up her long days in class by begrudgingly heading to her court-mandated after-school program at Developing KIDS. Sixteen at the time, Nixon had run into some minor trouble with the law in her early teens, and she felt like her court-ordered participation in an after-school program was a chore, to say the least.

“You could imagine how frustrated I was," she says. “I had a part time job, I was a senior in high school, and I had to go to this program every week."

Little did she know at the time, but Nixon's time at Developing KIDS would change the course of her life. After a few visits, her court-mandated attendance at the program expired, but she kept going back.

Ultimately, Nixon spent two years at Developing KIDS. When she completed the program, the staff encouraged her to apply for a full-time role as staff member. She jumped at the opportunity to leave her part-time job at a fast-food restaurant to provide other children with the support and guidance she had once received herself as a part of the program.

Developing Kids is supported by Connect Detroit, a summer youth employment program that is partly funded through JPMorgan Chase. The bank's five-year, $17 million commitment—with $3 million allocated to 20 cities across the US—is designed to provide young people with quality summer work experiences that will help guide them on a path to greater economic mobility.

Nixon has seen—and felt—its effects firsthand. “My first day as a student in the program, I was pretty shy, and my counselor, Sarina, made me feel included in a way that I hadn't felt before," she says. “This is the type of support I try to emulate when working with my own students."

One of Nixon's fondest memories is of a young boy with a reputation as a troublemaker who came into the program with what she describes as “quite an attitude." Over the next year, she worked with him and his family on relationship building and his social skills, to resounding success. “It was so rewarding to see him grow and mature, just even over the course of the year," she recalls.

Nixon says seeing this growth drives her to do the work that she does. “Years go by and I'll run into my students at the grocery store or while I'm shopping, and they've changed so much," she says. “I feel like I was a part of that, and it's so rewarding."

Now the mother of a young girl, Nixon says she plans to continue this type of work by pursuing her bachelor's degree in order to go into social work.

“I have no idea where I would be without this program," she says. “I came it at a time when I needed it most. I had no idea what I wanted to do. I'm committed to myself and my own journey now."