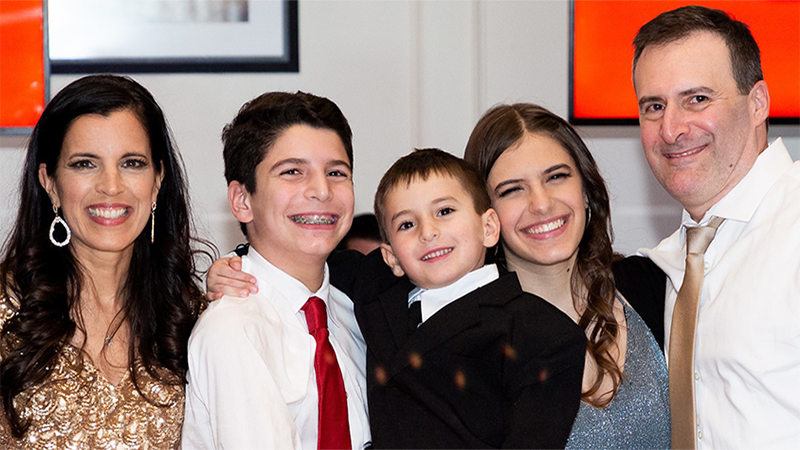 Galit Ben-Joseph's path to success as a financial advisor was paved with the help of supportive teachers and mentors. Working with her daughter's high school class, she finally had the opportunity to give others the same support.

When Galit Ben-Joseph was in high school, she was convinced she wasn't good at math. After struggling on a pre-calculus exam, she started losing confidence.

“I had a teacher who told me math wasn't my strength and was unsupportive," she recalls. "That message drove me to make sure I was working harder than everyone else—especially in my math courses."

Today, the 26-year veteran of Wall Street is one of Forbes' Top Women Wealth Advisors. Her path to success, she says, lay in finally finding someone who believed in her. "If you have someone, somewhere, saying to you that you can do this—whatever it is—then you can truly do it," she explains. "You just need someone to show you that it is within reach."

Ben-Joseph always wanted to do that for someone else—be a person who could help others find their way. And, as an Executive Director and Financial Advisor at J.P. Morgan Securities, she realized that she finally had the opportunity. She decided to begin with some of the students at her daughter's high school.

“These kids need help finding direction," Ben-Joseph says. "It's the perfect opportunity to show them a totally different world of possibilities by bringing them into J.P. Morgan."

Like most public schools in New York City, the high school Ben-Joseph's daughter attends serves kids from a wide range of socioeconomic backgrounds. Soon after her daughter arrived at the school, Ben-Joseph realized that many of her daughter's classmates come from financially insecure families.

“These kids don't have access to Wall Street," she says. "No one is telling them that they belong here. I wanted to give them encouragement."

Ben-Joseph asked the school if she could organize a tour of her office in J.P. Morgan's Park Avenue headquarters, in the heart of Manhattan. School administrators liked the idea and chose fifteen students to attend.

“I wanted them to see what it's like to work at the biggest bank in the world, to see our beautiful lobby and the enormous cafeteria," Ben-Joseph says. "I wanted them to be inspired by it and to know that they can work here, or someplace like it, if they finish high school and go to college."

"They need to understand that this can be an option for them."

A Day in the Life

To help make the kids comfortable, Ben-Joseph gave them money for lunch and let them explore the building's cafeteria. Once they were seated with their food, she explained what she does all day as a financial advisor.

“I wanted them to know that working for a bank is not just numbers and people screaming trades all day," she says. "There's also a ton of managing relationships and getting along with people, taking people to nice dinners, going to basketball games, things that would resonate with them."

Beyond understanding the realities of financial advising, Ben-Joseph also wanted the students to understand that there's a path for them to get to a position like hers—even if they sometimes struggle in school. “There are teams and teams of people in my office that help me all day long to navigate the parts of my job where I am totally lost," she says. "I wanted the students to know that."

Finally, Ben-Joseph introduced the students to one of her clients, a man who grew up in a crime-riddled neighborhood and spent 22 years in prison for a crime he didn't commit. When he was released, he received significant compensation for his wrongful conviction. Today, he relies on Ben-Joseph to helped him protect and grow his investments.

“I didn't tell my client what to say. He just spoke from the heart," says Ben-Joseph. “He said that jail isn't a badge of honor and isn't a place you want to go. He said, 'You need to keep working hard so you can get a job like she has.' He reached these kids in a way I couldn't because of his experiences and the way he spoke to them."

While exposing these students to the world of J.P. Morgan felt particularly meaningful to Ben-Joseph, it isn't the only way she's trying to help break down the barriers to people interested in business and finance. She's also given tours of her office to other students, and she teaches a class at Columbia University, which she describes as a “twelve-week Masters in Business Administration for non-business majors who are forced to take a business course."

In all cases, her motivation is the same: “A little encouragement can change someone's life," she says. “Just look at me. I never imagined I'd work on Wall Street. I was intimidated by it. But here I am. I am successful here. And I love it."