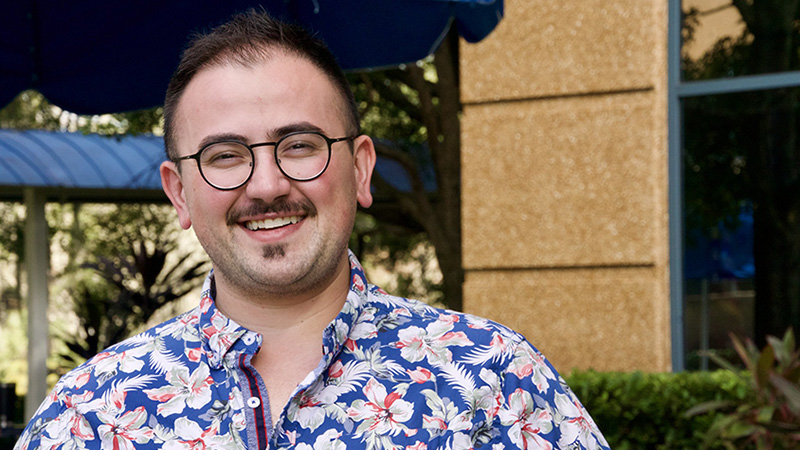 Building a Community, One Nonprofit at a Time

How this JPMorgan Chase Software Engineer found his knack for giving back through the Force for Good program.

Luke Franchina wanted to volunteer in his community, but he didn't know how. Looking around Tampa Bay, where he lived, it seemed to him like most volunteer opportunities involved manual labor, which wasn't where his strengths lay. “I wanted to find a way to utilize my skills to give back to the community," he says. “But I'm accident prone, so building a house is not really my strong suit."

Franchina found the answer at his job. In 2016, he started working with JPMorgan Chase in their software engineering program. In addition to his day job, he volunteered with Force for Good, a JPMorgan Chase program designed to help technologists develop their skills by building software for nonprofit organizations. For approximately eight months, participants volunteer ten percent of their work week to the project.

The gift of gifts

“I found that participating in Force for Good is the best way I can use my skills as a technologist to give back—before I got involved, I never thought that I could find that."

Luke's first assignment was with Children's Home Network (CHN), a Tampa Bay organization that works with at-risk children and their families. It operates several programs, including tutoring groups, a residential facility for children, and groups that support foster families.

Franchina's team developed a software product to help with CHN's yearly gift drive. Every year, he says, the Tampa Bay JPMorgan Chase office would receive a stack of over 300 children's wish lists that they needed to manually input into a site, so that JPMorgan Chase volunteers could buy gifts for the children. “And that was just a small part of the problem," he says. “Overall, there are more than 25,000 area kids involved in the program, which means that many other companies were doing the same thing."

Force for Good's solution was to build a web application that CHN's foster families and case workers could directly use to create and edit their wish lists. Using any connected device—like a computer, tablet, or smart phone—they could create lists and send them to companies, where volunteers could access the lists and buy presents.

As part of the project, Franchina met with the children's home staff every week or two to show the team's progress and demo the latest model. “I was amazed at how much it helped them," he says. “From our end, it was no big deal—we'd whip something together—and they would be ecstatic." The team finished the project before Christmas 2016, and it was adopted throughout the Tampa Bay area.

Helping to feed a city

The next year, Franchina wasn't sure about volunteering with Force for Good again, but as he saw a new crop of software engineers coming in, he decided to stay on to help them find their feet. That year, the team worked with Feeding Tampa Bay, an organization that partners with over 500 food pantries throughout the Tampa Bay area. At the time, hungry neighbors struggled to easily access information about local food pantries. They would have to search and check each pantry's website to find a location near them. Then they'd have to check hours and try to reach the pantry. “They might find a number, but it might not work, and then the pantry might be closed," Franchina says. “Eventually, they'd reach out to Feeding Tampa Bay, which would use a database to answer their questions. It was a huge call volume."

Force for Good's solution was to build a web portal, connected to Feeding Tampa Bay's website, that allowed pantries to easily update their locations, offerings and schedules online. Pantries could then quickly release information to the public. As for Feeding Tampa Bay, the portal meant an immediate reduction in call volume and—most importantly—a streamlined solution for families struggling with food insecurity. 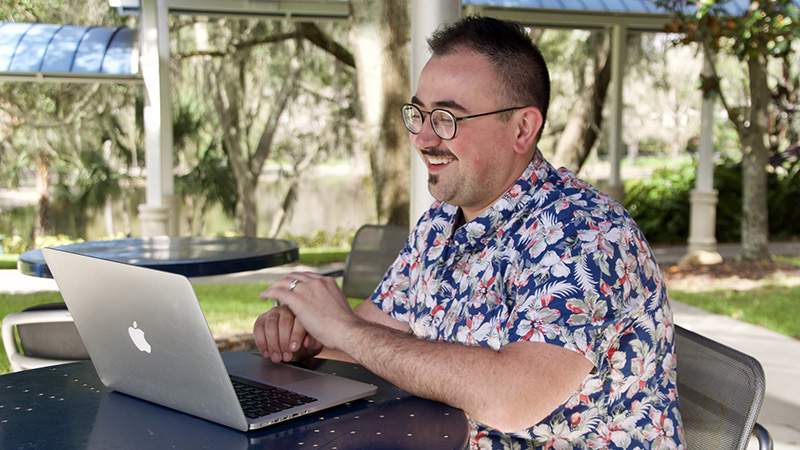 In 2018, his third year at JPMorgan Chase, Franchina got involved with developing a software resource for Out & Equal, a group that works to promote LGBT workplace equality. This project hit close to home. “When I first came to JPMorgan Chase, I wasn't out," Franchina recalls. “Then I had an epiphany: I realized that I could perform better, as the best version of myself, when I am myself."

Franchina began getting involved in JPMorgan Chase's PRIDE Business Resource Group, which promotes workplace equality and inclusion. He was elected co-chair of PRIDE Florida, JPMorgan Chase's state-wide organization, and in 2018 was able to go to the Out & Equal workplace summit, which was held in Seattle that year.

At Out & Equal, Franchina realized that he had a lot to learn about inclusion. “As the co-chair of PRIDE Florida, I had been organizing events for my group, but I realized that my organization wasn't inclusive," he says. “I realized that we needed to extend beyond gay and lesbian, to embrace a much broader range of people. I reorganized our events for the upcoming year."

That year, Force for Good designed and built Out & Equal's global resource hub, where participants from around the world can share best practices, trade resources, and answer each other's questions. “We wanted to keep the magic of Out & Equal alive," Franchina says. “Now, people at numerous companies can use the hub to connect year round."

Once and future activist

In the beginning, Franchina only planned on doing one year of work with Force for Good, but he ended up doing three. “They sucked me back in," he jokes. “Now, when my husband sees me furiously typing away, he knows what's going on. He'll say 'Force for Good?' and I'll say 'Yup.'"

In his three years with Force for Good, Franchina's work has helped bring toys to children and food to people who need it. Ultimately, it even helped him bring his full self to his work—and, in the process, he's been able to help others do the same.

Today, his volunteer work has extended beyond JPMorgan Chase. “I recently joined the Tampa Bay Chamber of Commerce," he says. “I'm helping connect the LGBT community to local businesses."

And the volunteerism goes on.