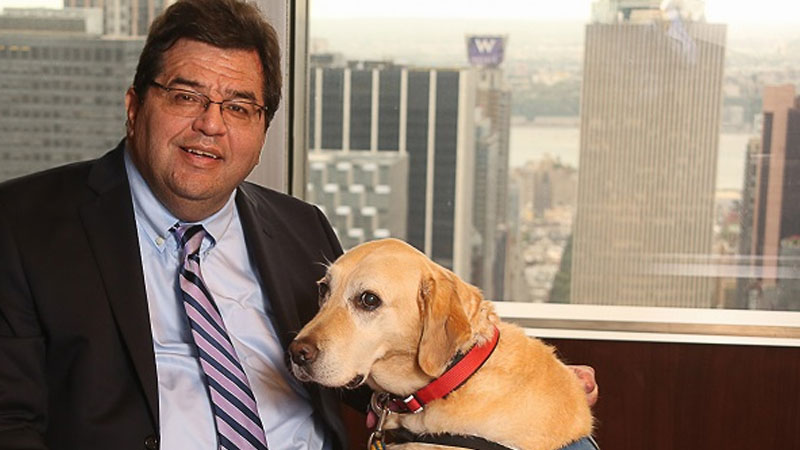 After I Broke My Neck, I Couldn't Walk. But I Could Still Lead

The most talented person in the room might have a disability.
Originally published by OZY on January 11, 2018.

After I Broke My Neck, I Couldn't Walk. But I Could Still Lead

Description: background image with audio only

Voice operator: Welcome to OZY's leadership journey, brought to you in partnership with JPMorgan Chase.

Voice operator: Leaders aren't born, they're made. We caught up with Jim Sinocchi, Head of the Office of Disability Inclusion at JPMorgan Chase, about how an accident changed his life and the shape of his career trajectory.

Jim Sinocchi: I was able bodied until I was 25 years old. I was a swimmer. I had a scholarship going to college. So I was an athlete and I had gotten a job at IBM to start my aspirations where I think I wanted to be a lobbyist at one time. I was going for my master's degree at NYU and I was also a college coach. So I had all that going for me. And as a college swimming coach me we took our swimmers to different places to train during the winter, and this one year in 1980 we took our our team to Puerto Rico and I broke my neck bodysurfing during that trip. The last time I was working for IBM and after 18 months they asked me to go back to work which was shocking because after you have an injury like I did and at my age, you go,what the heck can I do. I'm done. The dimensions of this are, you know, I was a young man. I was 25 years old and I thought I was the best thing since sliced bread. And you realize that the world turns upside down and at the time you think that your body is you. It's like how I present myself, it's all it's all that. And as we get older we learn that it's not all that, it helps but, it's not who you are inside. So I had to find a way to revalidate my life. How I got back into the into work, the IBM team commissioned by the chairman said Jim, there's this manager you can talk to. His name was Woody Klein a former press secretary for John Lindsay by the way and he said I've got 15 managers. I want you to spend the day interviewing with all 15 and you take the job that you want. I took the job in technical publications where I wrote and recovered at IBM. And so I got into disability, you know as I was working and making things accessible. Then one thing led to the other and I took on the role as, I didn't know what was going to be a champion at the time but I turned into a champion at IBM and representing IBM and people with disabilities started, that I was building my life and I wanted to figure out what I can do and how I can contribute. Chase was looking at quite a number of people to interview for this new Office of Disability Inclusion. And they were looking at candidates to take this position. And honestly I never thought I'd even get the job. I'm a quadriplegic and 62. I was 60 years 61 or 60 at the time. So who the hell is going to hire a person with a disability into one of the finest banks in the world the biggest brand in the world. Take a fat guy in a wheelchair and come down and do this work. I said was a firm hire the old guy. Five six squad. When Millennials are having trouble with the Generation X are having trouble getting employment. So I knew they were serious but I worked my butt off, I wanted to prove something to myself that I could be equal or at least competitive. I never thought I'd be a leader again or a leader period. You know this whole thing about a metamorphosis from able bodied to disabled and then what's next is what most of us that are able to succeed in life go through. How do we get to that change where you can it can be considered an executive and it's one thing to get a title. But can you give people you know who want to be led by you Or can you lead people on a mission where they don't doubt your abilities because you have a disability That's the bigger picture from that person that was once able bodied and lost it. I was in a mainstream newspaper. So I took my kids apple picking. And people don't think folks like me can do the apple picking and I described what I did as a family and how my son picked up apples for example. I had almost you know 600 letters from the community you know seeing that thing as a fantastic thing. So I wanted to humanize people with disabilities and let them know I love I cry I hurt. I raise my kids and I do things like you do. And then when I talk about it now I tell folks I have kids I have grandkids. And when I sit down for coffee with you I don't talk about my wheelchair or my ailments or my near death experiences in surgery. I talk about stuff that we can relate to. I'm not here for publicity. I am here to change the culture. Does the culture have enough bandwidth to take people into their firm and afford them the opportunities that everybody can. Can you move from that mailroom to the boardroom if you have the skills and the talent to do so That's what I came in to do. So my purview is not just the little office with three brooms in a closet to try to sweep things up, I want to change the world with this.

While on vacation, I broke my neck bodysurfing. I was 25 years old and until then considered myself the best thing since sliced bread. But that life-altering accident changed the focus on everything. I was convinced I was done, that my career was over.

But IBM thought differently. I had already been working for them, and they assured me they wanted me back after my 18-month recovery. I took up a job in technical publications and, 39 years later, in 2015, I retired as corporate director of marketing communications. At IBM, I met many people who had a lot of heart. When someone offered me a helping hand, I took it in the spirit in which it was given. But I worked my behind off. I wanted to prove something to myself: that I could be an equal or at least competitive.

I had never thought I would be a leader. After all, it’s one thing to get a title, but can you get people who want to be led by you? Or can you lead people on a mission where they don’t doubt your abilities because you have a disability? I was plagued by doubts but made it work.

I was waiting in line to buy chicken nuggets for my granddaughters when I received a phone call informing me that JPMorgan Chase was interested in having me interview for a new position they had made available: head of the Office of Disability Inclusion. By this time, I had already moved to Massachusetts to be near family, and taking up another job was far from my mind. Who was going to hire a 60-plus-year-old quadriplegic into one of the finest banks in the world? I wondered. But I was floored by JPMorgan Chase’s commitment to the cause.

True assimilation … means creating a culture that has enough bandwidth to afford all employees a level playing field.

I came in to effect a culture change around attitude, and that’s exactly what we are continually striving for. True assimilation doesn’t mean that we want people to be like everybody else; it means creating a culture that has enough bandwidth to afford all employees, including those with disabilities, a level playing field. Give them technology tools so they can work independently. Make sure there’s room in the budget so you can fix doors, and put in ramps if needed. Are we putting these folks on a track to get promoted? These are the questions we have been asking at JPMorgan Chase.

The important point here, which I also write about in my blog, View From the Chair, is that the job goes to qualified people, disability or not. And that’s the message the community has to digest. Writing about the issues people with disabilities face has been cathartic for me, and through it I hope to humanize the disabled. We love, cry and hurt like anyone else.

Empowerment is an especially valuable tool. It lets you know you can earn that job and take care of yourself. I often say: “At JPMorgan Chase, we don’t have jobs for people with disabilities; we have jobs for qualified people. Whether or not they are disabled doesn’t matter.” That’s the kind of environment I am working on developing at JPMorgan Chase. It’s been many years since my life-altering accident, but I’m proud of my journey.

Jim Sinocchi is head of the Office of Disability Inclusion at JPMorgan Chase & Co.
Learn about our initiatives in diversity, equity & inclusion.