The goal of the JPMorgan Chase Institute is to help decision makers appreciate the scale, granularity, diversity, and interconnectedness of the global economic system by using our unique lens to fill in the blind spots left by other data sources. Our Local Commerce (LC) lens provides refreshed insights on the economic conditions in 15 US cities. The LC lens, comprised of over 53 billion credit and debit card transactions, is distinctive because it tracks actual consumer purchases across a variety of consumer and merchant groups. To help users acquaint themselves with this freely available resource, we have compiled answers to a list of common questions.

What is Local Commerce (LC)?

Local Commerce is comprised of local, or "placed-based," expenditures on everyday goods and services.

Figure 1: Inclusion criteria for transactions based upon location of the buyer. 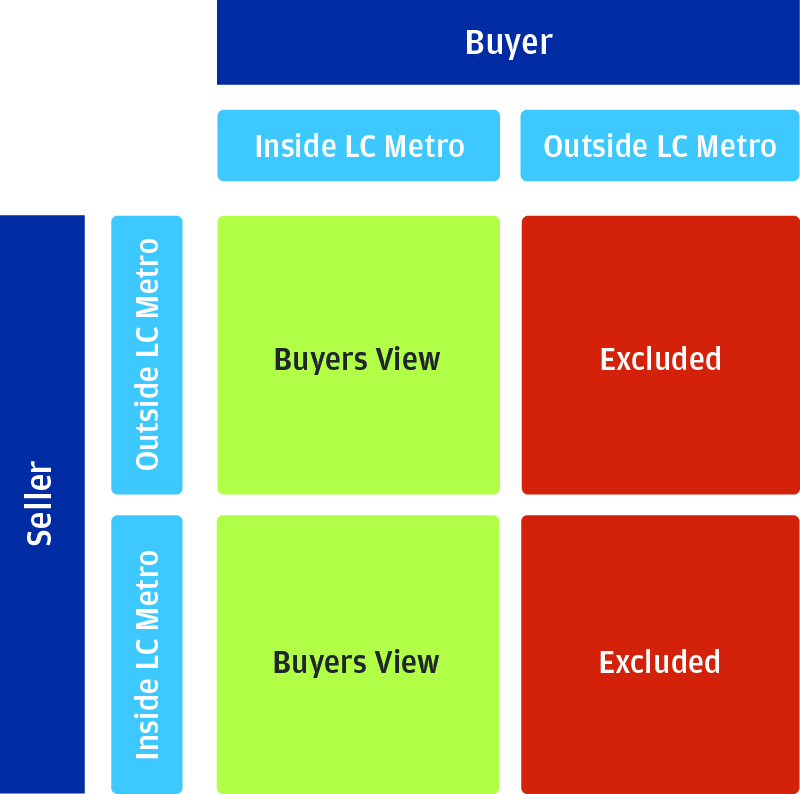 What is the buyers view of LC?

The buyers view of LC captures spending by buyers from the perspective of their residence. For example, if we are discussing the buyers view in Detroit, buyers must live in the Detroit metro area. By focusing on transactions made by residents of a metro area, the buyers lens speaks to the evolving set of commercial options available to residents of a metro area. It can shed light on the extent to which consumers choose to make purchases from local or remote retailers, and the likelihood of said purchases being made online. Importantly, it shows how these choices change over time.

Figure 2: Examples of the geographic locality of transactions 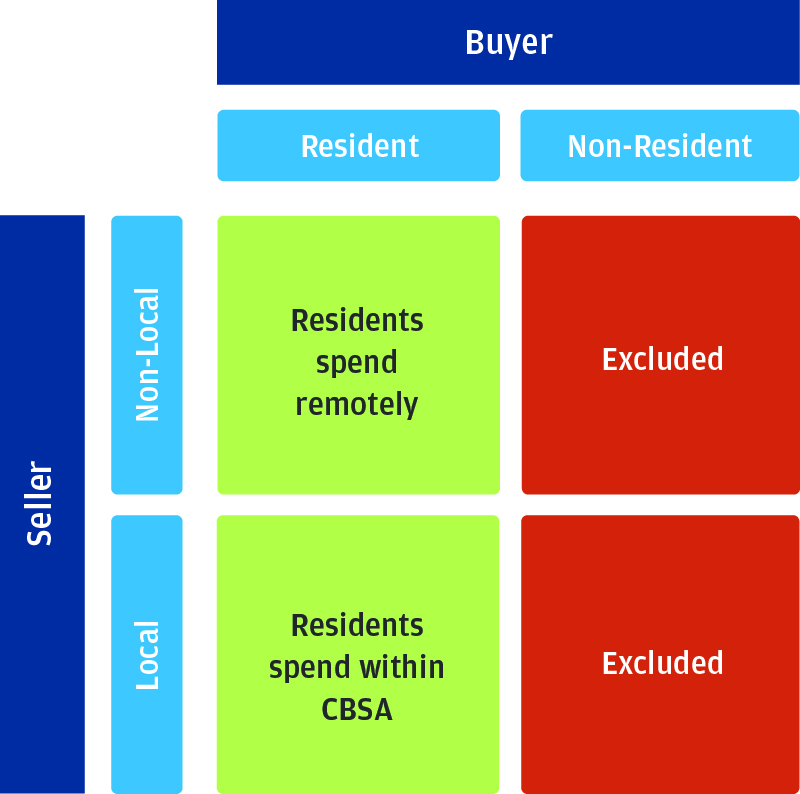 What makes the LC lens unique?

The LC lens is a powerful complement to public data sources because it is administratively collected, it is high volume, and it can avoid a tradeoff between geographic granularity and reporting frequency:

What does LC tell us about broader economic growth?

To better understand the contributions of the LC lens, it is useful to place it within the context of existing data sources. The most commonly used indicator of U.S. economic health is gross domestic product (GDP), which is the total value of goods produced and services provided by firm assets located in the country. Broadly speaking, GDP is comprised of consumer spending, gross investment, government spending, and the net value of exports.

Gross domestic product is the total value of goods produced and services provided by firm assets located in a country.

* Percentage captures the portion of GDP from each component. These figures represent the seasonally adjust figures from Q4 2016.

The first category—consumer spending—makes up more than two-thirds of GDP. A better understanding of this key source of economic activity can improve our understanding of the drivers behind economic growth. The consumer portion of GDP is defined as personal consumption expenditures (PCE), which is the amount of goods and services purchased by households and nonprofit institutions serving households who reside in the United States. In other words, these are purchases by end users.

The LC and PCE lenses contain data that can be used to better understand final consumption in the US, but there are some differences. First, while there is considerable overlap, there are some kinds of purchases that are included in the LC view, but not PCE. The converse is also true.

Figure 4: Differences between the LC and PCE lenses

BOTH LC AND PCE

* The most notable difference between LC and POE is geographic scope. Conceptually, LC captures purchases from merchants in a given metro area, while PCE captures all purchases in the United States. If the consumer makes a purchase at a merchant outside of an LC metro area but in the US, it is excluded from LC and included in PCE.

Second, PCE is an aggregate measure of consumption for the entire U.S. economy, which is simultaneously its greatest strength and weakness. As a guide for how consumers are doing across the entire country, PCE is invaluable, but it offers limited insight into how consumers are doing in different places within the country. A clearer view of variation within the country enhances our collective understanding of economic drivers, which is where the LC view offers an advantage. Since it is built on such a large set of geographically informed data, it can speak to economic activity in specific cities. This fine-grained view offers a more solid basis for tactical decisions by households and firms related to their local markets.

Why is the Local Commerce lens important?

About two-thirds of U.S. Gross Domestic Product (GDP) is comprised of the purchase of goods and services by individuals and non-profits. Any analysis of the economy and where it is heading must have good measures of this activity. However, new purchasing channels are reshaping consumers' shopping behavior. For example, as the availability of online commerce expands, many merchants have less of a need to be physically close to consumers while other merchants are recognizing the need to be even closer just to compete. Alternatively, the proliferation of card and mobile payments creates new infrastructure needs for merchants, and lessens the extent to which they must handle cash.

Established merchants, large and small, are finding their operating strategies tested by these changes. In addition to shifting patterns in consumer spending, we are also seeing increases in expenditure on services relative to expenditure on goods. This evolving dynamic tests our ability to understand how the economy works with conventional statistical measures. Commonly relied upon data sources were developed based upon different market paradigms.

To understand market behavior, we must understand the strategies employed and decisions made by consumers and merchants. We need to know which populations drive local spending, and where they reside. Moreover, we need a better method of distinguishing which purchases are made from local merchants versus purchases from merchants that are located far from where consumers live.

What is the Local Commerce data asset?

As of March 2021, our core data asset is comprised of over 53 billion credit and debit transactions from over 61 million consumers in 15 US metro areas. Since we are cumulatively building the data series, the number of transactions and consumers grows each month.

The unit of analysis for Local Commerce research is the credit and debit card transaction. Each transaction carries de-identified information about the buyer and seller involved in the transaction. On the buyers side, we are able to identify the age range of the buyer associated with the transaction along with the location (as defined by ZIP code) of their residence. On the sellers side, we are able to identify the product type being sold by the seller, the location of the seller (as defined by ZIP code), and the channel by which the purchase was made.

What is the geographic range of commercial activity in the LC Data Set?

Currently, transactions come from buyers in 15 Core-Based Statistical Areas (CBSAs), or metropolitan areas: Atlanta, Chicago, Columbus, Dallas-Ft. Worth, Denver, Detroit, Houston, Los Angeles, Miami, New York, Phoenix, Portland (OR), San Diego, San Francisco, and Seattle. The choice of these metro areas was based upon data coverage, geographic distribution, and a desire to vary the metro area size and commerce base in our set.

How does the LC lens relate to the Monthly Retail Trade Survey?

Despite some differences in the kinds of retail activity covered, both the local commerce data underlying the LC asset and the data used to generate estimates of the Personal Consumption Expenditures (PCE) component of GDP inform our view of consumption activity in the U.S. The source data for PCE estimates come, in large part, from the Annual and Monthly Retail Trade Surveys (ARTS and MRTS), produced by the U.S. Census Bureau. These surveys seek to capture aggregate sales volumes at retail and food service stores, as well as inventories held by retail stores. This mail-out/mail-back survey of 12,500 merchants across the country remains the most conceptually comprehensive measure of retail activity in the US.

The LC and MRTS lenses differ in important ways. As vital as the MRTS is, it relies entirely on self-reported data from a relatively small number of firms. The sample size limits the ability of the MRTS to speak to local conditions, which is why the MRTS only reports national numbers. The LC lens, by contrast, offers measured data on realized transactions from millions of consumers. The sheer volume of data permits us to report local estimates with confidence.

The goal for both the LC and MRTS lenses is to capture purchases by end users. MRTS does this by asking a limited sample of firms about their sales, thereby avoiding business-to-business transactions. The LC lens, by contrast, uses the card choices of consumers. We exclude virtually all business-to-business purchases by excluding business cards from our transaction set, though it is possible for small business owners to make purchases of factor inputs with their personal cards. Moreover, the MRTS targets firms that have been in existence long enough to have acquired employees, and it is structurally biased towards the inclusion of larger firms. By using card spending, the LC lens can see spending at even short-lived merchants, as well as small service providers (e.g. hairdressers, small health providers, etc.) that are likely to be missed by MRTS. In short, neither source is perfect, but the limitations of one are often the strength of the other. As such, LC data provide a powerful and unprecedented complement to MRTS that is freely available to the public. 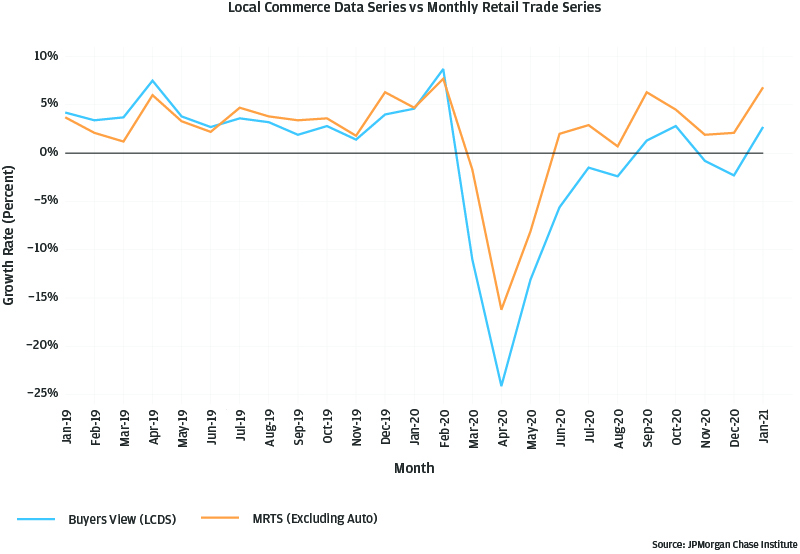 How does the LC data series differ from the LC Pandemic Spending data series?

How does the LC data series differ from the Local Consumer Commerce Index?

The Local Consumer Commerce Index (LCCI) was the first iteration of the JPMorgan Chase Institute’s efforts to provide decision-makers timely, granular data that are regularly updated to help them understand local economic conditions and make policy choices to enhance economic vibrancy in their communities. The LC data series and LCCI share many commonalities, but differ in a few key areas: