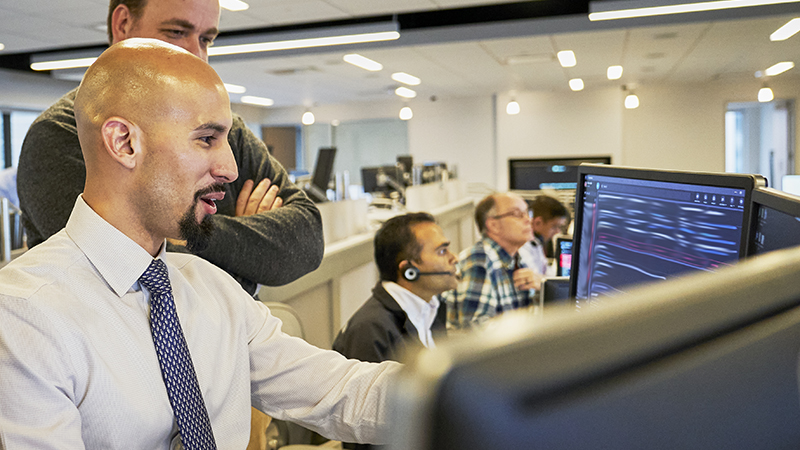 This story originally appeared in the Houston Business Journal.

U.S. Army Captain Jake Cortez came home to Houston from a tour of duty in Afghanistan to attend to some momentous business—the birth of his first child.

But his homecoming was more life changing than he anticipated. Two days after returning from the hospital with his wife and newborn son, Houston was swamped by the relentless fury of Hurricane Harvey.

“My whole neighborhood was under water. We lost our house; we lost everything," Cortez remembered.

The young family took refuge with relatives, piling into an aunt's house that became a temporary home to multiple families. His aunt worked for JPMorgan Chase & Co., and Cortez noticed his aunt's bosses calling to check on her and giving her time off to deal with the emergency. As he volunteered around Houston to help those even less fortunate, he saw Chase volunteers out doing the same in their blue Chase shirts.

“They were everywhere. That was my 'A ha!' moment," Cortez said. "I said to myself, if I am ever going to leave the military, that's the place I want to be."

Soon after, Cortez ended his 10-year military career. He had enlisted as a private and left service as an infantry captain, completing Airborne and Ranger training along the way. After he retired, he was selected as the first in Houston to participate in JPMorgan Chase's Military Pathways Development Program, which provides veterans with the necessary experiences, training, and mentorship to succeed after service.

The Pathways program is part of a company-wide commitment to hire, retain and promote veterans. “We are creating a pipeline of military veterans to come in and be leaders at our firm," said Kerry Bruning, program manager for the Military Pathways Development Program.

Since 2011, JPMorgan Chase has hired more than 3,300 veterans in Texas. The company also is a major employer of people seeking a career in technology, like Cortez.

“In a hyper-competitive world, an enduring enterprise must deliver products and services that are better and faster, saving customers both time and money," Duke said. "More and more, this is done with the helping hand of technology."

“We spend nearly half of our budget on innovation – looking at how modern technologies like AI, machine learning and blockchain – can help us continue to provide best-in-class services," he said.

“I know technology is the future, and I knew how much this company spends on technology and the value it places on it," Cortez said. “That's why I came here to work as a part of the local technology team. Now, as a technology strategist in one of our Global Incident Command Centers, I'm focused on streamlining the way we combat major technology incidents across the firm."

As the pace of innovation accelerates at unprecedented speed, the need for innovative tech talent is greater than ever. In Houston, JPMorgan Chase hires technologists and software engineers who understand how to apply modern technology to solve business problems and who are able to work together in a highly collaborative way.

There's no question the landscape for top technology talent is competitive, Duke said. So we're focused on being an employer of choice by fostering a culture that respects and promotes the talents of individuals from all backgrounds.

“This company has opened doors of opportunity for me that I didn't think were possible, pushing me to challenge myself to find ways to learn, grow and make an impact every day," Cortez said.

JPMorgan Chase has nearly 6,000 employees in Metro Houston, making it one of the city's largest private sector employers. After Hurricane Harvey, JPMC provided more than $30 million in immediate relief, including about $6 million in companyand employee-donations to nonprofits focused on the Houston area.