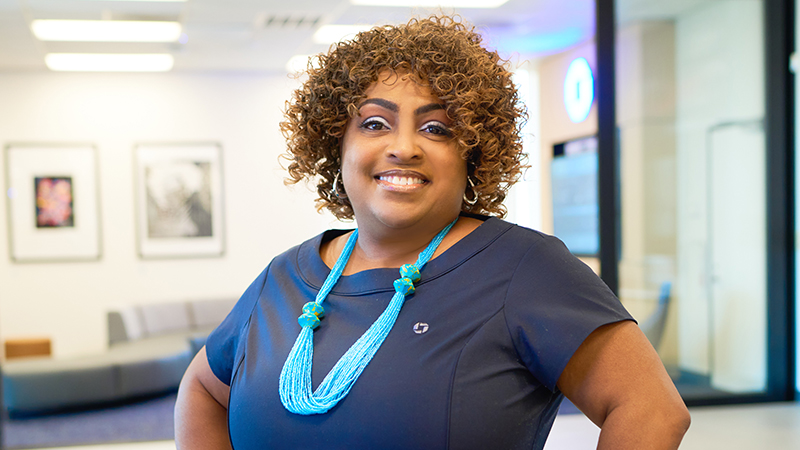 How to Drive Inclusive, Equitable Employment

Businesses and community partners in Southern Dallas are coming together to improve job outcomes for Black, Hispanic, and Latino workers.

In Texas’s Dallas and Collin Counties, Black, Hispanic, and Latino households are twice as likely to be economically insecure as white households. That means they don’t earn enough to provide for a basic family budget, which includes essentials such as groceries, transportation, and health care.

This is, in part, due to a lack of access to stable jobs with family-supporting wages and pay inequity. There are also social hurdles that Black, Hispanic, and Latino workers disproportionately face, such as paying a greater percentage of their income for housing and child care, having limited child-care options, and a lack of historic opportunity to build family wealth.

For instance, in Dallas and Collin Counties, half of Black, Hispanic, and Latino renter households are burdened by housing costs, which means they pay more than 30 percent of their overall income on housing. Black and Latino households, on average, also pay 24 percent of their household income on child care, while white households pay 9 percent and take in over two times more income annually. Additionally, many residents of Southern Dallas, which is predominantly Black, Hispanic, and Latino, live in a child-care desert, meaning they lack access to certified child-care options.

These racial disparities stand in the way of equitable economic opportunity. For that reason, in 2015, United Way of Metropolitan Dallas (UWMD), an organization that focuses on improving health, income, and education, launched the Pathways to Work collaborative. The program aims to eliminate pay inequities and desegregate high-growth industries in Dallas by building cross-industry partnerships with employers, financial backers, and skills-training providers to determine workforce needs and arrive at collective solutions.

UWMD also seeks to address the underlying systemic barriers that often inhibit Black, Hispanic, and Latino workers from reaching equitable employment opportunities. It does this by investing in supportive services, such as child care in Southern Dallas, which enables more parents, particularly Black, Latina, and Hispanic mothers, to enter the workforce.

JPMorgan Chase was instrumental in launching the Pathways to Work collaborative. The firm was interested in learning how to improve job outcomes across the country, and in UWMD, it found a much-needed workforce intermediary partner to help address the barriers that workers in Dallas face.

Since the launch of Pathways to Work, JPMorgan Chase has provided UWMD with more than $930,000 in funding to expand opportunity for all Dallas workers and support more equitable representation in the local labor market. Pathways to Work—which is overseen by Andrea Glispie, UWMD’s senior director of career pathways—is the only workforce collaborative of its kind in Texas.

One important facet of UWMD’s Pathways to Work collaborative is that it works directly with employers to develop targeted skills programs that train workers for jobs in high-demand sectors, creating an inclusive pipeline to employment in industries that have a low representation of Black workers, such as construction, and of Hispanic and Latino workers, such as health care. UWMD also supports employers in implementing more inclusive hiring practices, such as setting diversity goals, assessing talent, and advocating for skills-based rather than credentials-based hiring.

For instance, in assessing the local labor market, UWMD found that only 12 percent of Black workers and 8 percent of Hispanic and Latino workers were in traditionally high-paying computer and technology jobs. So, in 2021, in collaboration with the Dallas Regional Chamber, and with JPMorgan Chase’s financial support, it created a new program called the Dallas Technology Pipeline Partnership. It brings together stakeholders from the tech industry and IT training providers to develop skills programming for workers and facilitates the hiring of the program’s graduates by also involving recruiters and hiring managers.

This kind of collaboration is key to UWMD’s work.

The result of breaking down these walls is opportunity: More workers in Southern Dallas can pursue jobs in high-paying industries that once seemed inaccessible.

A crucial element underlying this effort is local access to financial institutions. As more workers from Southern Dallas are hired for higher-paying jobs, the presence of low-cost financial services in their community means that, for instance, rather than having to use a costly check-cashing service, residents can instead visit their local bank and build wealth.

To address this, a Chase Community Center branch opened in the Oak Cliff neighborhood of Southern Dallas in March 2021. It’s a local banking option that directly empowers residents with its free financial education programming and services. Terri Thomas, the Oak Cliff branch’s community manager, leads monthly workshops, one of which is known locally as “Terri Talks,” on subjects such as managing credit and budgeting, both at the branch and in community spaces such as churches. The branch also provides complimentary home-buying workshops and informational sessions with Chase business consultants on various topics, including navigating your cash flow.

What’s more, the whole region would benefit: Its GDP would rise 35 percent—a total of $115 billion added to the community.

“We want to make sure that we positively impact the community that we serve, so that’s prioritizing its growth and health,” says Thomas. “Because, ultimately, when the community does well, we all do well.”

A version of this story originally appeared in The Atlantic.