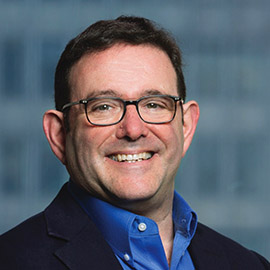 Peter L. Scher is Vice Chairman of JPMorgan Chase & Co. and a member of the firm’s Operating Committee.

Scher is the firm’s senior business executive for the Mid-Atlantic Region — one of the largest economic regions in the United States — and oversees the firm’s global Corporate Responsibility department, including its public policy efforts, the J.P. Morgan International Council and Morgan Health, a business unit focused on improving the quality of healthcare for the firm’s employees and creating new models for employer-based healthcare.

Scher led the firm’s $200 million investment in the revitalization of Detroit, which has been featured on 60 Minutes, profiled by Fortune Magazine in ranking JPMorgan Chase number one on its list of companies “Changing the World” and chronicled by Harvard Business School as a case study for inclusive capitalism.

Business Insider named Scher as one of 10 people “transforming how we think about capitalism” and Washington Life Magazine called him one of the most influential people in the U.S. Capitol. The Washington Business Journal recognized him as one of the top business executives in the Washington, D.C. region.

Prior to joining JPMorgan Chase, Scher was the Managing Partner of the Washington, D.C. office of law firm Mayer Brown LLP and earlier served as the Chairman of their Government and Global Trade Practice. He was selected by Chambers USA as one of the “Leading Lawyers,” recognized for his “depth of understanding” about international markets.

Scher spent nearly a decade in public service. Nominated by President Clinton, he was confirmed by the United States Senate as U.S. Special Trade Ambassador and served as one of the lead U.S. negotiators on China's entry into the World Trade Organization. He previously served as the Chief of Staff for the U.S. Trade Representative and the U.S. Department of Commerce, Staff Director for the Senate Committee on Environment and Public Works and Chief of Staff to former U.S. Senator Max Baucus.

Scher is a founder and the Chairman of the Greater Washington Partnership and was appointed by U.S. Commerce Secretary Gina Raimondo to serve on the National Advisory Council on Innovation and Entrepreneurship (NAICE) in 2022. Scher is also a member of the Board of Directors of the health care provider Centivo, the Economic Club of Washington, D.C., the Council on Foreign Relations and the Policy Advisory Board of the Biden Institute at the University of Delaware School of Public Policy.