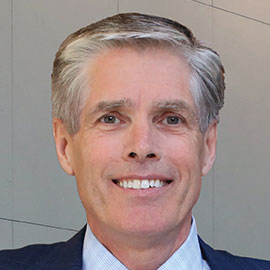 Gordon Smith became Co-President and Chief Operating Officer of JPMorgan Chase in 2018. He reports to Chairman and CEO Jamie Dimon and is a member of the firm's Operating Committee.

He is also the CEO of Consumer & Community Banking, a leading provider of banking, credit cards, auto finance, payments, mortgages and investment advice. Its 130,000 employees serve nearly 63 million households and over 4 million small businesses through more than 4,900 bank branches across 38 U.S. states and the District of Columbia, 16,000 ATMs, mobile, online and by phone.

Chase is also the #1 U.S. credit card issuer, the #1 primary bank in its footprint, the #1 business bank based on primary relationships, a top auto lender and a top U.S. mortgage originator and servicer. Chase.com is the most-visited banking portal in America, as more than 52 million customers access the bank’s digital channels regularly, including more than 37 million mobile users.

Smith joined Chase in 2007. He served first as CEO of Card and then of the Card, Merchant Services and Auto Finance businesses before taking over Consumer & Community Banking in 2012.

Before joining Chase, he spent more than 25 years at American Express, where he led and managed several businesses, including the U.S. Domestic Consumer Card Business. From 2005 until 2007, he was President of the Global Commercial Card business.

Smith holds a master's degree from the Thunderbird School of Global Management.

He is married with two grown children and lives in New Jersey.