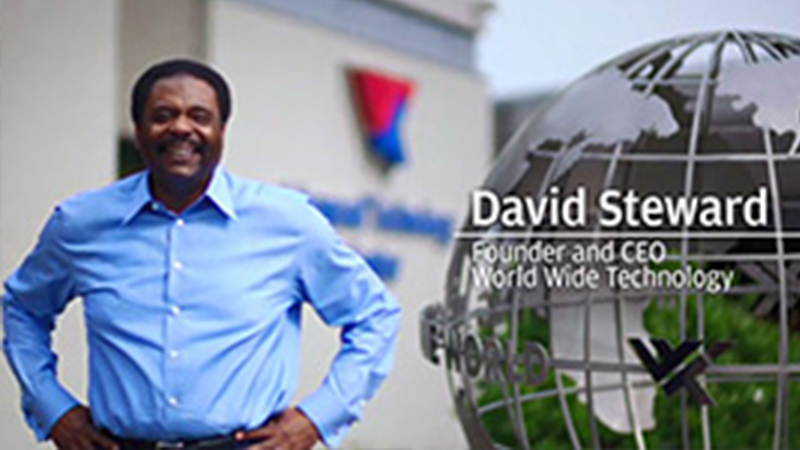 David: One of the things I promised myself many years ago, is I don't want to wake up at 85 years old, and have any regrets.

On screen: A montage of scenes:  Close-ups of David.  David smiles and gives a salute.  David folds his hands.  The WWT logo on the wall.  David smiles, in a vibrant conference with his team.

David: I think about 1990, I'm thinking about this company. Who calls a company "World Wide Technology," with five people, 4,000 square feet? What's world-wide about this?

Jim: When we were originally founded, we were very different from what we are today.

On screen: Jim stands beside the large metallic globe in front of the World Wide Technology building. Cut to a photo of Jim and David as young men in business suits.

Jim: We were a value-added reseller of computer equipment. That has changed quite a bit since then.

On screen: The enormous WWT building, which extends the full length of a city block. In back of the building, a parking lot with dozens of parking spaces. Cut to an aerial view of the building. Inside the building:  A massive well-lit, well-organized warehouse.  A man inspects a line of computers.  A man works on computer wiring.  Close-up of Jim, speaking.  A man types on a laptop.  Smiling workers pose in the warehouse Close-up of Jim.

Jim: World Wide Technology simply put, builds complex technology infrastructure solutions for large, enterprise businesses, and we also write software that bring that infrastructure to life. Something, that was very intentional as we grew the business was the focus on our people and our culture. .

Dave: The relationship between JPMC and World Wide Technology goes back nearly eight years ago, when WWT was expanding onto the East Coast.

On screen: Montage of employees working at WWT:  Working on computers.  Inspecting equipment.  In the warehouse, using heavy machinery to move large boxes.  A woman with long dark hair points to a bar graph displayed on a wall-sized monitor. The inside of a crowded Chase branch.

Dave: JPMorgan Chase was looking for a partner that could help with the deployment of some of the technology into the branches. They were also very interested in the fact that WWT was a minority-owned business.

On screen: Close-up of David.

David: JPMorgan Chase's alignment around our core values, that has to do with diversity in the workforce, as well as inspire-based.

On screen: Montage of employees working at WWT:  A meeting in a conference room.  A woman unpacks a box.  A man works on a network of wires. Close-up of Brian Sharpless, a man with a blue suit. White text appears beside him: “Brian Sharpless, Diversity Business Development Manager, World Wide Technology.

Brian: Being diverse means that you have the ability to not only understand various cultures, various technologies, but be able to adapt to things that you're not accustomed to as well.

On screen: Close-up of David. Then, WWT employees.

On screen: Close-up of Jim.

Jim: It is something that we are constantly looking to find. .

On screen: A man and a woman, in a conference room, watching a bearded man give a presentation in front of a white board. Cut to Ann.

Ann: It was important for us to create a supplier diversity program, so that we can help coach and mentor companies like we were coached and mentored in the early days.

On screen: David and Jim walk together in a hall. Cut to Todd Weaver, a man with short black hair. Beside him, white text: “Todd Weaver, CEO, T.W. Constructors.

On screen: Construction at the WWT property. An enormous crane is reflected in the windows of the WWT building.

Dave: JPMorgan Chase has really pushed us to expand our business. We're moving into Europe, we're moving into Asia. Last year, WWT grew our top-line revenue by over 30%. Over one billion of that revenue was generated by business that we saw coming from our overseas locations.

On-screen: Montage of employees at WWT speaking with one another:  In offices.  At cubicles.  In technology rooms.  In warehouses. Close-up of Jim.

Jim: In the spirit of why we are successful is that we want to create a culture that our employees, wherever they live, that they feel that part of their responsibility is to have a positive impact on the community.

On screen: Close up of David.

David: How do we make one another better, is a philosophy that all of us have here. What you want to get back is kind of what you... you put out there. I'm excited for the difference it will make to the generations to come.