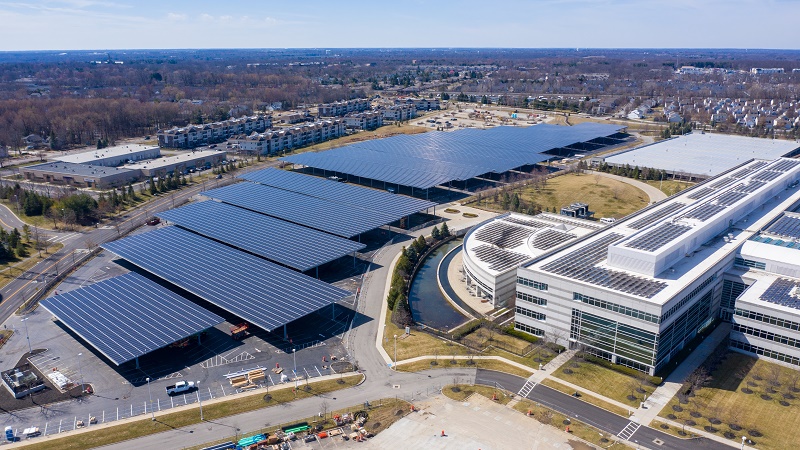 JPMorgan Chase turns to the sun to power its Columbus operations

Now that JPMorgan Chase & Co. is nearly finished turning the parking lot at its McCoy Center at Polaris into a giant solar farm, it is planning to do something similar at its other Columbus offices.

The bank, the Columbus region's largest private employer with about 20,000 workers here, will be adding solar arrays at three other of its commercial sites in the Columbus area — Vision Drive, Morse Crossing and in Westerville. Like the Polaris project, the panels are being added to carports at the sites.

"These installations in the Columbus market are the crowning jewel of our solar deployments because of the scale and the size and the impact," said Tyler Deaton, vice president in Chase's global real estate group who has a focus on sustainability.

When up and running, the panels at Polaris, coupled with the solar panels Chase previously installed on the roof, will meet 75% of the electricity needs at the McCoy Center, which is said to be the largest single-user office building in the U.S. after the Pentagon.

All of the projects together will provide enough power to meet half of the electricity needs of the bank's Columbus commercial operations.

The McCoy Center is Chase's largest building in the world, housing 10,000 workers. At 2 million square feet, the building has the same square footage as the Empire State Building.

When done later this year, the project will consist of about 40,000 panels covering about 165,000 square feet.

The panels are about 20 to 25 feet off the ground, providing a canopy over much of the parking lot, which will have 9,000 spots by the time the work is completed.

The project is the second largest commercial office solar installation in the world, according to Chase.  The only one bigger is at Apple’s corporate offices in Cupertino, California.

Chase is installing solar panels at its other offices around the country, but Columbus is a standout because of Chase's large presence here.

The work that Chase is doing is part of a broad effort by tech companies, retailers and other companies to make investments in clean energy to tackle climate change.

In 2019, companies installed more than 1,280 megawatts of commercial solar capacity, according to a report released last fall by the Solar Energy Industries Association. Solar adoption by companies has expanded rapidly over the past several years, with two thirds of all capacity installed since 2015.

“The world’s most recognizable brands are walking the walk when it comes to their clean energy commitments,” Abigail Ross Hopper, president and CEO of SEIA, said in the report. “Businesses are choosing solar energy because it can significantly curb their energy costs and add predictability during these uncertain times. We expect that the corporate sector will make greater investments in solar as businesses make and follow through on clean energy commitments to address the climate crisis.”

The push by Chase is part of the bank's effort to also help clients achieve the climate goals of the Paris Agreement.

Last month, the bank set a target to finance and facilitate more than $2.5 trillion over 10 years — including $1 trillion for green activities — to advance long-term solutions that address climate change and contribute to sustainable development.

The bank has set a 2030 target to reduce the greenhouse gas emissions from the operation of our buildings, branches and data centers by 40%, based on a 2017 baseline.

"It has grown to something beyond my wildest dreams of a pillar within not only the real estate industry, but all industries," he said. "It is something all companies are focused on."

A version of this story originally appeared in The Columbus Dispatch.