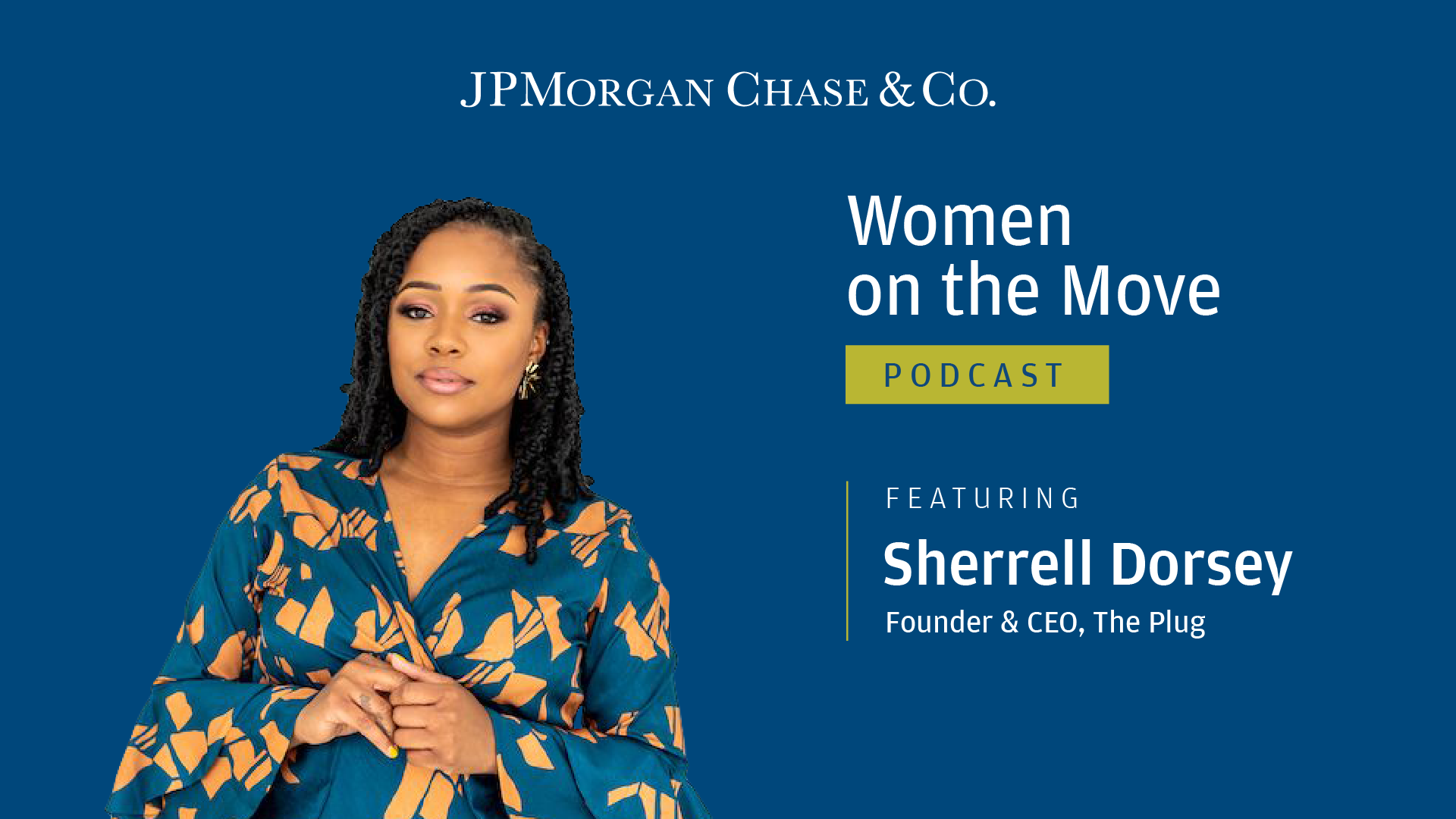 Highlighting Black tech innovations, with The Plug founder and CEO

Tech innovation from underrepresented communities, with The Plug CEO and founder

Witnessing and reporting on the Black innovation economy

Sherrell Dorsey has long been fascinated by the tech innovations coming out of the Black community across the United States. In this episode of Women on the Move, the founder and CEO of The Plug—a subscription-based digital news platform covering the Black innovation economy—sits down with host Sam Saperstein to discuss her background in marketing and technology, her journey with The Plug, and her new book.

Sherrell tells Sam that it was her technophile grandfather who first nurtured her love for technology by insisting that she and her sister spend an hour a day on Mavis Beacon typing courses. That early foray into tech, she says, paved the way for her to take part in a program called the Technology Access Foundation, which taught kids of color in the inner city about technology, computers, and programming languages—and helped prepare Sherrell for high-school internships at Microsoft.

Sherrell says she loved her experiences at Microsoft, learning about building tech products and also realizing she could have a place at the tech table. But after high school, with her family expecting she’d go to college for computer science, she tacked in a different direction and studied fashion merchandising at the Fashion Institute of Technology. “I got to study the business of marketing within the fashion world, a multi-billion-dollar industry, and [one that] really encompasses so much technology from textile selection and forecasting to the building of an e-commerce business and brand.”

Taking those marketing skills with her, Sherrell worked at both Uber and Google Fiber. But while she loved her day jobs, she found herself more and more drawn to understanding the tech world from the vantage point of the Black community. “I would keep up on industry literature and read about these great profiles of, you know, the Gates’ and the Musks and the Zuckerbergs,” she tells Sam. “But I did not see the folks that I was interacting with and engaging with on a daily basis profiled or quoted. And the journalism to me just felt very one sided. It did not identify genius as looking like, sounding like, feeling like, or coming from communities that looked like mine, but those were the people that I was inspired by.”

Transition to journalist and author

Sherrell remembers getting up early before heading to her job at Uber or Google Fiber and curating articles about “folks who I find really fascinating.” She was soon writing about Black tech innovations and submitting stories to publications like Fast Company. “And just trying to show the robustness of communities of innovation coming up with really cool ideas to solve specific challenges that they were facing that were being left out of this mainstream sort of noise,” she says. “Like sure robots are space. [But] here's a guy who's creating an app to exchange vegetables and fruits with neighbors on a more human level.”

Soon The Plug was born—with a $10 domain registration and a free MailChimp account. Sherrell built up subscribers one at a time based on her solid reputation as the tech journalist who covered Black start-ups. “It's just about being consistent,” she tells Sam. “It's about serving my audience well, and beyond that, it was every subscriber truly earned through this sense of trust and through this sense of representative storytelling, and care and adoration, and sometimes, you know, harsh honesty.” Sometimes, she shares, she had to be the one to say, “Hey, maybe this company isn't as exciting as I thought it was gonna be.” That kind of honestly, she says, helped solidify her reputation and that of The Plug.

Sherrell’s most recent venture is her new book, Upper Hand: The Future of Work for the Rest of Us, just published in January 2022. She describes it as a love letter to her grandfather. Drawing on his experience of moving from Birmingham, Alabama, to Detroit and finally to Seattle where “there weren’t a lot of folks who looked like him,” Sherrell wanted to illustrate her own experience along with Seattle’s changes, and how that was replicated across the country in a way that left many communities behind.

As far as the future, Sherrell says she’s excited to have The Plug become “the intelligent source for an inclusive business future.”