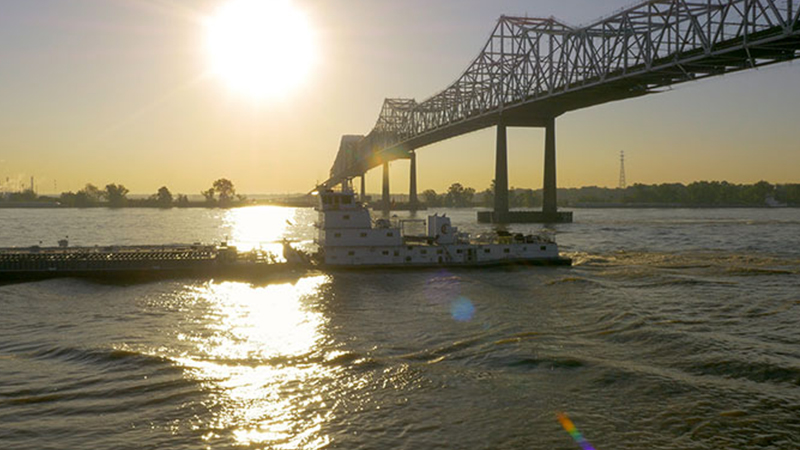 Keeping the economy of New Orleans flowing for five generations.

The 2,320-mile long Mississippi River has been a critical economic lifeline for New Orleans and the nation, for hundreds of years. The French founded New Orleans in 17181 on a patch of high, dry ground 100 miles above the river’s mouth.2 Today, family-owned marine transportation operator Canal Barge Company works the river, which remains a critical part of the nation’s economy and culture.

On Screen: BEHIND EVERY COLLABORATION IS A STORY

THE MISSISSIPPI RIVER'S THE WHOLE REASON THAT THIS CITY IS EVEN IN EXISTENCE.

ALL THINGS NEW ORLEANS REALLY CONNECT TO THE REST OF THE COUNTRY THROUGH THE MISSISSIPPI RIVER.

WE'VE CONTINUED OVER GENERATIONS TO TRY TO BUILD A GREAT COMPANY THAT IS VERY MUCH NEW ORLEANS-CENTRIC.

I SEE A LOT OF SHARED VALUES BETWEEN CANAL AND JPMORGAN CHASE.

THEY ACTUALLY CARE ABOUT ARE THEY HELPING US GROW OUR BUSINESS.

AND, THEY'VE BEEN THERE WITH US AS WE HAVE GONE THROUGH TREMENDOUS GROWTH.

THEY SEE CLEARLY IT IS IN OUR MUTUAL BEST INTEREST FOR CANAL BARGE SUCCEED.

Founded in 1933, Canal Barge Company Inc. has grown exponentially from its early days of operating a single barge along the Gulf Intracoastal Waterway, maturing as an integral partner in the New Orleans business base. The company owns and operates a fleet of more than 800 barges that transport valuable liquid, dry and deck cargoes up and down the river to destinations in North America, Central and South America, the Caribbean, and even across the Atlantic Ocean.3

Merritt Lane III, President and CEO of Canal Barge Company since 1994, believes that strong, family-like relationships feed both company and industry success. “Solid relationships within the industry exemplify the best in teamwork,” he says.

Lane has spent much of his tenure fostering deep ties with maritime businesses and organizations locally, regionally and nationally. “I have great respect for all of the moving parts in the industry, including our professional mariners and all of the good people who support our operations from the shore, 24-7-365.”

Lane’s sentiment of corporate family extends to the company’s bank, Chase. “Chase is a true partner and a valuable part of our business and industry,” he says. “The bank, and its predecessors, has been our agent since the 1950s, collaborating and brainstorming with us. We have a relationship built on trust, local and mariner knowledge, and community.”

The President and CEO also focuses heavily on mariner training initiatives, investing significant funding in each newly hired employee to provide them the opportunity to become a licensed mariner. “We hire for attitude and train for skill,” he says. “The result is a strong foundation of ready, loyal and supportive employees and operators.” Once certified, mariners can be hired anywhere—so the retention of employees is a particular point of pride for the team at Canal Barge.

Additionally, Lane nurtures the rapport Canal Barge has with the New Orleans community. As a member of the executive committee of the New Orleans Business Council, he is actively involved in flood protection initiatives for the city, and was the first chairman of the board of The Idea Village, an organization devoted to driving a culture of entrepreneurship in New Orleans. “We genuinely care about the community and contributing to its ecosystem,” he says. “After all, the community is the foundation for the future of New Orleans.”

Canal Barge is both a cornerstone on which the city’s success was built and a wonderful example of the entrepreneurial spirit within New Orleans. “The river is our lifeline here, offering an abundance of opportunities. It’s amazing to see what this marine transportation company is capable of doing every single day,” says Lizette Terral, New Orleans Regional President, Chase Commercial Bank. “Canal Barge is integral to the success of New Orleans.” 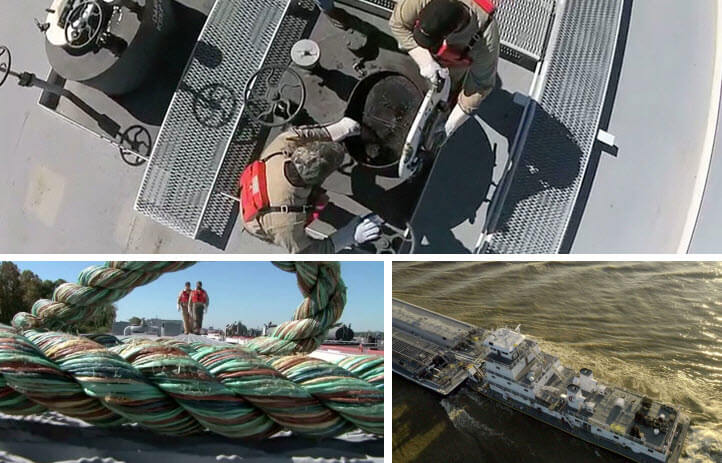 Stephanie lives and works in New Orleans as an author and independent journalist.