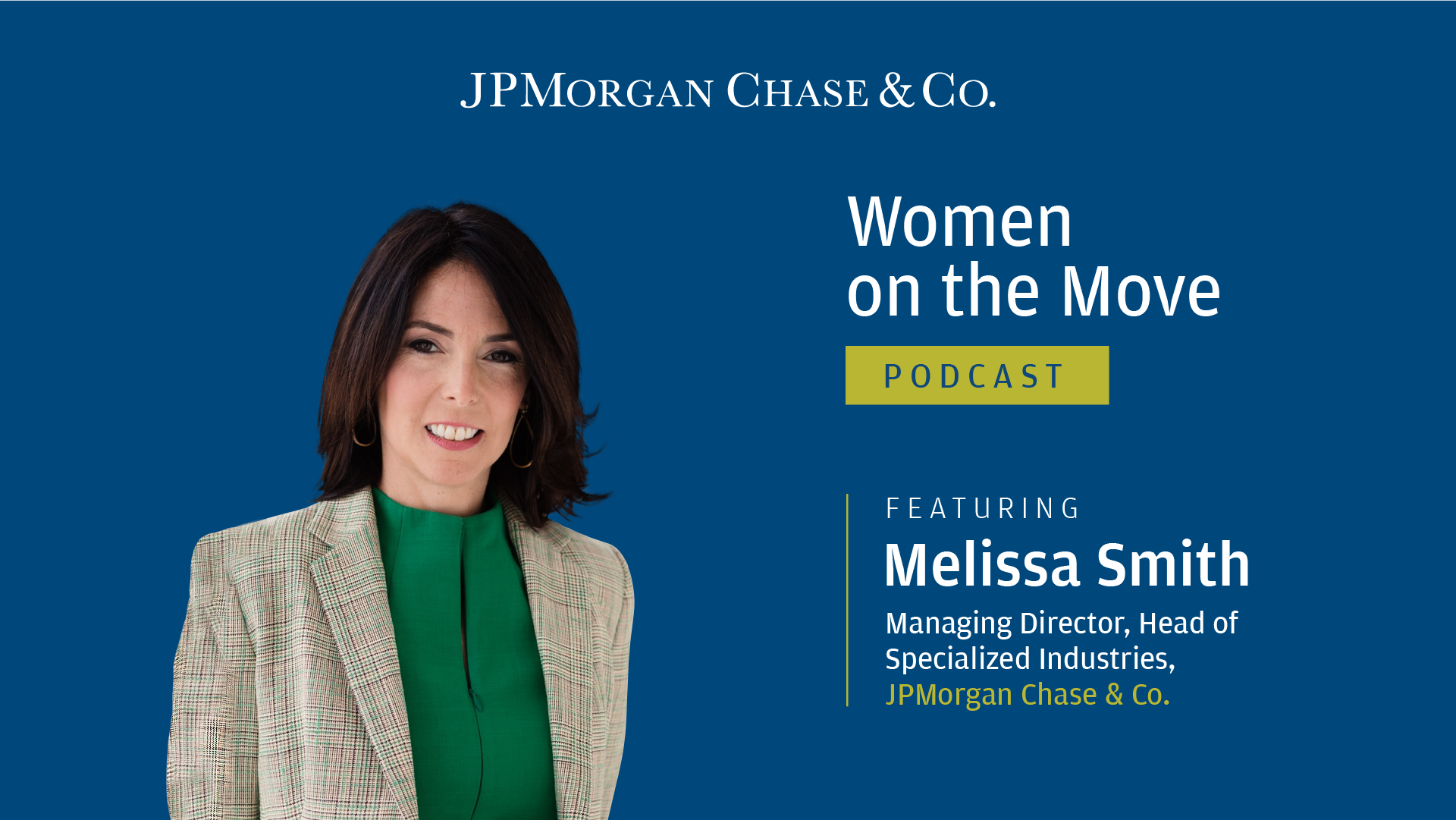 As head of specialized industries at middle market banking at JP Morgan Chase, Melissa Smith is focused on helping female and diverse founders grow and scale over time. She sits down with Women on the Move host Sam Saperstein to discuss the innovation economy, her passion for supporting women in business, and how her early life as a ballerina prepared her for a banking career.

From ballerina to banker

Melissa says she developed early skills in discipline, commitment, and focus from her classical ballet training. She began studying ballet at age 4, and by the seventh grade, her mother was driving her 120 miles a day to train in Washington D.C. Between her determination, her family’s support, and the willingness of teachers to re-arrange her high school schedule so she could finish classes by noon, Melissa ended up graduating high school a year early and starting a professional ballet career.

By her early 20s, Melissa made the decision to give up dancing in order to go to college full time, eventually earning her master’s in public policy from the University of Chicago. Straight out of that program, she joined JP Morgan Chase in public finance. “For me, the public finance role was a great way to kind of leverage the quantitative skills I had acquired at school with my interest in the public sector,” she tells Sam.

From the associate program, Melissa moved to the debt capital markets team, where she got to experience the fast-paced trading floor. “I just loved the pace and the energy level and the phones ringing all the time and the noise,” she recalls. She also loved the opportunity to be up close with senior leaders on the trading floor, learning by observing everything from how to lead effectively to how to manage complicated clients.

Focus on the innovation economy

After 16 years on the investment bank side of the firm, Melissa switched to the commercial bank side where she now leads the industry coverage teams within the middle market business. Today, she’s focused on building an ecosystem around the innovation economy.

Melissa describes the innovation economy as high growth, disruptive companies across a variety of industries—primarily technology, consumer retail, and healthcare payments. She shares examples of how innovative companies have changed how we live and how we work in recent years: online fitness, food delivery, and streaming services.

Of particular interest to Melissa is supporting the gender and racial diversity of those founders, their employees, and their boards. She notes that while progress has been made, female and diverse founders continue to receive a much smaller percentage of venture dollars than companies founded by men. One reason for that, she says, is that female founders often don’t have access to the same networks for seeking funding that their male counterparts do. Another is that often their companies have products targeted to diverse markets, making it harder to capture the attention of mainstream funders. Both of these are issues that Melissa’s team aims to help female founders navigate.

Another area of focus for Melissa and her team is increasing female representation on boards. “Internal appointments on the VC backboards are actually part of the reason the boards have become more diverse,” she notes.

Melissa tells Sam that some of the most inspiring work she’s done is coaching women and their businesses. She also discusses her own experiences and what she’s gained from mentors and sponsors. She says she’s gained the most from mentors who are honest with their feedback and help women process the constructive feedback they get form other sources, such as performance reviews.

Melissa believes that sponsorships are invaluable to women. She defines a sponsor as someone “helping to make sure you have the visibility and network internally that you need to get a promotion [etc.].” She says that she was helped the most by a sponsor who was more prescriptive and gave her a to-do list of people to sit down with each month.

Today, she continues to devote energy to helping other women. “The thing that I very much learned in watching these more senior women who were sort of mentors or sponsors was what a difference it made, and the passion that they had around it,” she tells Sam. “And I consider that so much part of my day job. And it's really one of the most rewarding things that any of us can do is to help somebody else, sort of give back and help them advance their career.”