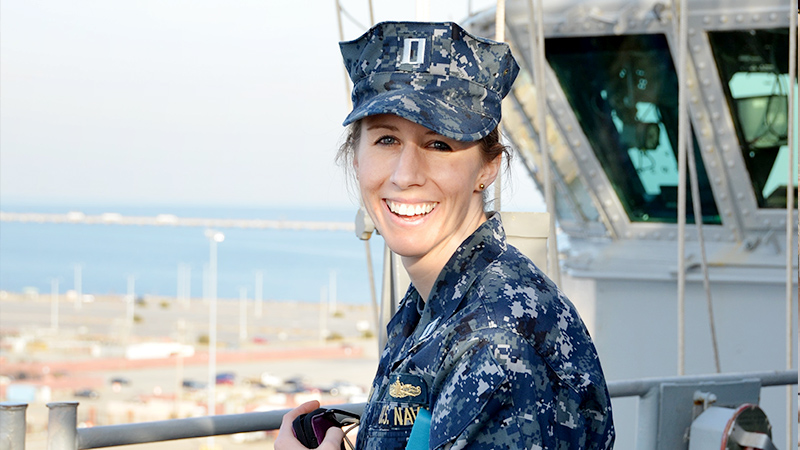 For Navy veteran Sarah Kuehl, the community—and sacrifice—of military service is something she carries with her every day. When she joined JPMorgan Chase, she found a community that understood…and felt the same way.

When Navy officer Sarah Kuehl left active duty for the private sector in 2016, she didn't expect to be swapping one kind of public service for another. But now, as an Executive Director for the JPMorgan Chase Institute—the bank's socioeconomic research hub—she works with a team of data scientists, analyzing customer spending information to give policymakers insight into ways to help US communities weather financial shocks and volatility.

Still, it's a far cry from the work she did after graduating from the Naval Academy in 2008: Commissioned as a Nuclear Surface Warfare Officer, Kuehl deployed on the USS Mesa Verde, went to nuclear power school and then served on the USS Enterprise and, finally, at the Joint Information Operations Warfare Center in San Antonio, Texas.

A Pathway to a New Career

In 2016, Kuehl found out about the Military Pathways Development Program at JPMorgan Chase. "I learned right away that JPMorgan Chase is not just a bunch of finance bankers, that there are so many different aspects to the bank that I could be exposed to," she explains. "You can have a lot of different careers within one company. It's much like with the Navy: You're always getting sent to different parts of the Navy and getting exposed to different types of work."

That flexibility appealed to her: In August 2016, she transitioned into the Naval reserves and a rotational program at JPMorgan Chase. She started her new career in Columbus, Ohio, where she worked with the location leader program.

"That role was very much focused on community engagement, and employee engagement—initiatives that were all about the bank's culture and connectivity," Kuehl says. As part of that work, she became involved with the bank's community outreach, including Carry The Load, a program aimed at veterans like her.

Carry The Load is a non-profit organization dedicated to helping Americans remember the true meaning of Memorial Day and honor the service and sacrifice of the nation's veterans.

Its spotlight event is a series of relays covering 20,000 miles in 48 states over the 32 days leading up to Memorial Day. Participants can either walk or cycle as part of the relay team, or participate in a rally when the relay comes through their area.

"The concept is that those of us who serve in uniform and have deployed are all carrying some of our friends that we left in those foreign lands," says Mark Elliott, Managing Director, Global Head of Military and Veterans Affairs at JPMorgan Chase. "Many will carry that burden — 'Why me? Why wasn't I the one?' — the rest of their lives."

The message resonates with Kuehl. "For veterans who are part of Carry The Load, we're remembering and understanding what our service members and brothers and sisters in arms went through," she says.

"One of the two goals of the Carry The Load initiative is to help veterans like me feel like we are a community within the bank," explains Kuehl. "The second goal is to help people see that every aspect of what the military and veterans do within our country applies to everyone."

Kuehl worked with Carry The Load in Columbus, but when she moved to Washington D.C. to work with the JPMorgan Chase Institute, she discovered that the city didn't have a Carry The Load program. "I picked up that torch and got a group together to do our first Carry The Load here in the spring of 2019." she recalls. "Over the course of the last couple of years, it has created more recognition and understanding and just the ability for us to really understand not just the sacrifices, but the why behind it."

It's unclear if Kuehl, who has continued to serve in the U.S. Navy Reserves, will be leading the Carry The Load charge this year — though it'll likely be on her coworkers' minds more than ever. In January, the Navy told her that she was being mobilized and will be serving in the Middle East.

JPMorgan Chase has been very supportive, she says. "There are other people within this bank that have been deployed," Kuehl explains. "But when it's somebody is in your circle—like, 'Wait, where did this person go?'—then you understand that military service is part of your world too, and affects other people within your world."