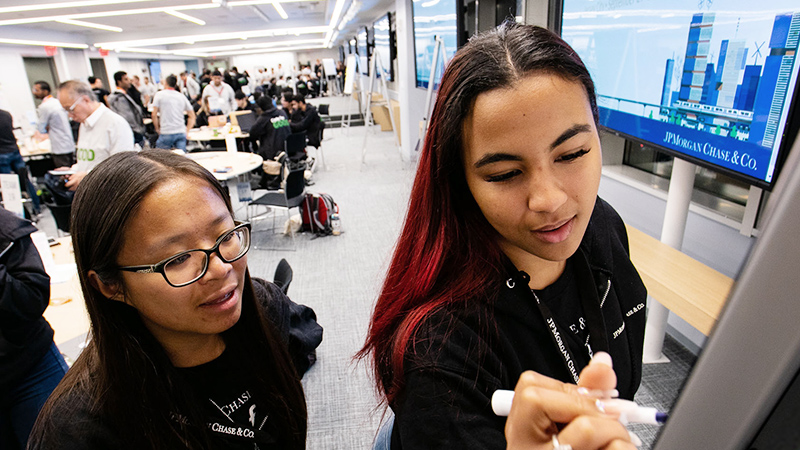 Global Nomad: Building an Online Community for Young People Around the World

Want to build an app to connect young people around the world? Start by asking young programmers what they'd want to see...and how they'd build it!

Global Nomads Group had a problem. The nonprofit connects students from around the world to promote empathy, understanding, and action. It was in the process of introducing a new program, Seat at the Table, where young people could connect to discuss everything from homework to global hunger.

The trouble was, Global Nomads was using Zoom and—as workers around the world can attest—the application had limitations when it came to scheduling across time zones, registering students from different countries, and ensuring access to meetings. Beyond that, Global Nomads didn't have the staff it needed to scale up the number of sessions in Zoom.

Global Nomads needed to find a tech tool that would suit the tech-savvy students using it, while providing the bandwidth needed for the program to grow and the automation needed to make the most of its limited workforce. In short, it needed skilled programmers to create an app to connect the world—at a price it could afford.

Megan Shen didn't know it yet, but she was going to become part of the solution. The 20-year-old computer science major at the University of Maryland had recently learned about a hackathon being organized by JPMorgan Chase, called Code for Good. Held in Jersey City, New Jersey in September 2019, Code for Good had a simple premise: Put a lot of tech enthusiasts together for 24 hours and let them come up with ideas to help nonprofits.

And so Shen found herself in a giant room with three nonprofits and approximately 300 other coders, including several JPMorgan Chase engineers. “The mood of the room was definitely exciting," she recalls. “After we met up with our teams, each team sat at a round table in a big room with all teams, and it was so invigorating working alongside each other."

Shen's mission? To help a nonprofit that sounded really cool, but which she had never heard of: Global Nomads Group.

There were pizzas and sodas—and LOTS of caffeine—with cots set up for anyone who succumbed to sleep. Most of all, there was coding and conversation, as a bunch of strangers who were dedicated to helping others became a team. After it was over, Shen felt really good about the experience—especially about her proposal that students could click on a country's flag to connect with someone from that country. And, after she graduated from college, she applied to work full-time for JPMorgan Chase, where she is now a software engineer. 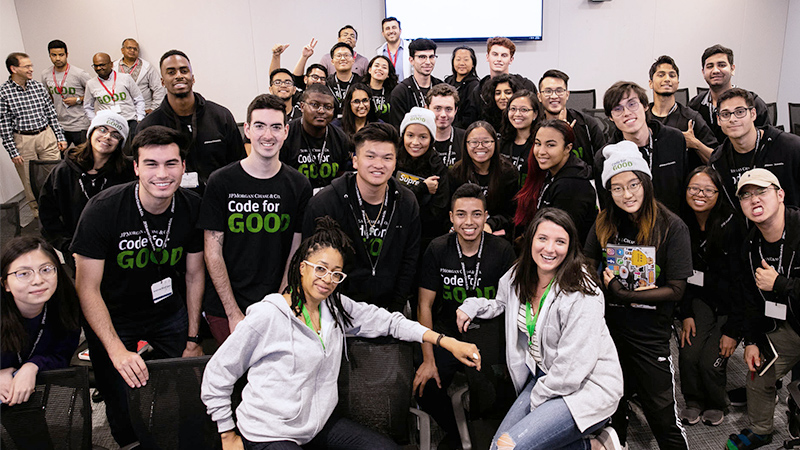 Making a Dream a Reality

While the hackathon was over after just 24 hours, the work on Global Nomad's app was just getting started. Code for Good—the JPMorgan Chase group that hosted the hackathon—had generated a bunch of recommendations. Now it was the job of Force for Good—a group of dedicated JPMorgan Chase programmers and engineers—to make the student coders' ideas a reality.

Hasnain Aziz, an Executive Director at JPMorgan Chase, volunteered to lead the 12-member Force for Good team tasked with transforming the hackathon's ideas into a fully-functioning and sustainable app for Global Nomads Group. The project lasted eight months, Aziz says. The coders started by dedicating part of their regular work week to it—which is standard procedure for Force for Good programs. However, as it progressed, they also began working in their spare time, in between regular work and, often, in evenings or weekends. In other words, it became a labor of love.

“It was a joyful experience," Aziz recalls. “And it was a lot of fun to play with technological tools that we may not get to play with at work."

There were plenty of interesting wrinkles to iron out. For instance, Global Nomads wanted to expand their user base from teenagers to include young adults up to 25 years of age, because they found that college students were also eager to reach out to younger people around the world.

But with that age range, Global Nomads needed to set up the app so that people around the same age would be talking to each other, as opposed to a 15-year-old and 25-year-old chatting. The nonprofit also wanted other safety features—including automatic recording of all video conversations and engagement features like discussion prompts that pop up during conversations. Making that happen was the job of the Force for Good team.

Ever since the app went live, Goussous says, teenagers and young adults around the world have benefited, just as everyone hoped. In the words of a teen user from Tanzania, “Seat at the Table is the perfect platform for me to connect to teenagers around the world, sharing different experiences and the brilliant ideas brewing in our minds."