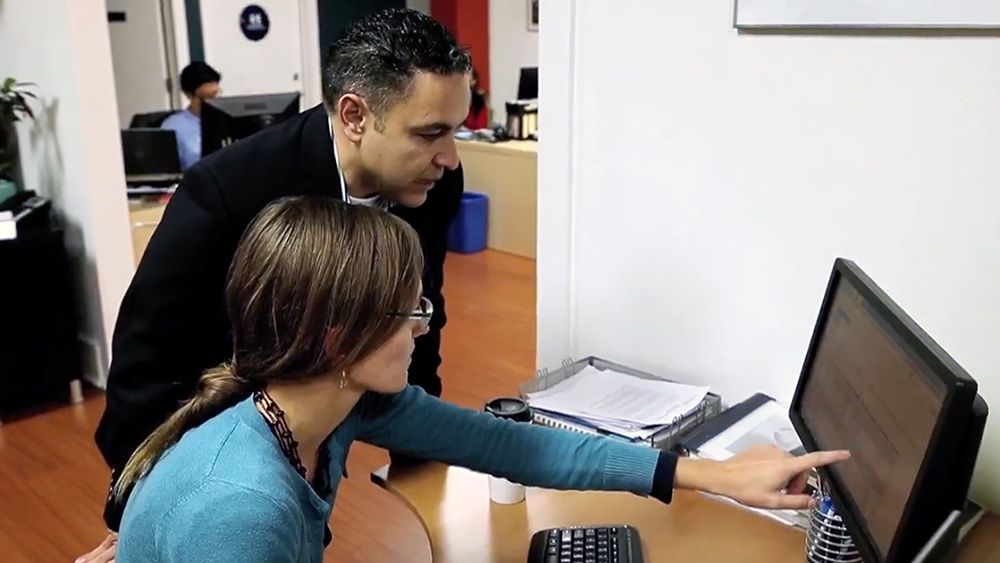 Low-income individuals in the United States face extraordinary financial challenges: 54 million people do not have credit scores.1 Without access to affordable products and services offered in the financial mainstream, these people are often forced to rely on payday lending sources.

Janis Bowdler, President of the JPMorgan Chase Foundation, recently sat down with José Quiñonez, Chief Executive Officer of Mission Asset Fund (MAF), a nonprofit supported by JPMorgan Chase that creates pathways for low-income families to enter the financial mainstream, to discuss the importance of credit.

Q: Janis Bowdler: What access do low-income families in the United States have to the financial mainstream?

A: José Quiñonez: Very little. A recent study found that low-income families on average spend $2,412 a year on fees for alternative financial solutions like payday lenders and check cashers.Extremely low-income families are paying 23.5 percent of their family income on debt payments alone.3  Being poor in America is expensive, particularly for those living outside of the financial mainstream

Q: Why is building credit so important?

A: José Quiñonez: Having a good credit score is like having a good reputation. Without a credit history you may not get a loan to start a business, buy a car or buy a home. Sometimes you can't even get a job or rent an apartment. You simply can't do much.

On Screen: The following video was produced by JPMorgan Chase & co. as sponsored content for Politico's What Works series.

On Screen: JPMorgan Chase & co. on What Works in Exanding Access to the Financial Mainstream

On Screen: The Mission District

Jose Quinonez: 54 million adults in the U.S. do not have a credit score; they don't have a credit history. Social loans are loans that people make with each other, very traditional in the immigrant communities.

Jose Quinonez: People are sort of coming together and pooling each other&apos;s resources so they can actually have access to their own capital, but those loans never get recorded or reported to the credit bureaus...

Jose Quinonez:  We have what we call "lending circle sessions" here people come together and they actually, then, agree on how much they're going to contribute.

What we do is basically record all those decisions and then, we're the ones that actually make the distributions of the loans and, because we record those payments, we are then able to, then, report that information to the credit bureaus.

They're borrowing and lending money with each other and so, our default rate is actually less than 1%. The repayment rate is 99.02%, I mean, which is really unheard of.

Helen is one of our clients and I think she's an example of all of the clients that we work with in helping them get into the financial mainstream.

She had left her abusive relationship and her and her daughters were basically homeless. Because she didn't have a credit history, no landlord would rent to her.

Helen: I didn't know anything and now that I have a high credit score, it has changed my life in every way.

Jose Quinonez: Getting that credit score is so transformative because that's like one of the moments where they feel visible, they feel recognized, they see the possibility of their dreams coming to fruition.

We're allowing them the ability to, then, fulfill their full economic potential, which is good for them, as individuals; good for them, as a family and as a community; and then, that actually helps the economy, as a whole.

And, now, they can actually access high-quality loans, where they can buy cars, they can buy houses, they can invest in their communities and be full participants of our economy. That's good for everybody.

On Screen: The Mission Asset Fund is expanding by franchising the Lending Circle Program to non-profit partners across the U.S.

Within 1 year, MAF Lending Circles members improve credit scores by an average of 168 points (According to Mission Asset Fun Data)

JPMorgan Chase & co. is proud to be a corporate partner of Mission Asset Fund

Q: Tell us about Mission Asset Fund as an example of a program that helps low-income individuals gain access to the financial mainstream.

A: José Quiñonez: MAF is a nonprofit organization rooted in San Francisco's Mission District, working to help low-income families improve their financial security. Since we were founded, we focused our attention on solving this question: “How can we help people improve their financial lives, particularly those who did not have access to the most basic of products like checking accounts or credit scores?” Fortunately, we found the answer in how the people we serve leverage social capital — their relationships with family and friends — to survive and thrive.

Q: How does the  Lending Circles  Program help make this goal a reality?

A: José Quiñonez: The Lending Circles Program builds on a time-honored practice common all over the world. Without access to banks and financial services, small communities of people come together and pool their resources. Lending Circles is a social loan program where people lend and save money from each other on a rotating basis. Offered at zero-interest and zero fees, MAF services these loans and reports the payment activity to the credit bureaus to build participants’ credit. And with JPMorgan Chase’s support, the Lending Circles Program has been able to expand to 40 cities across the U.S. 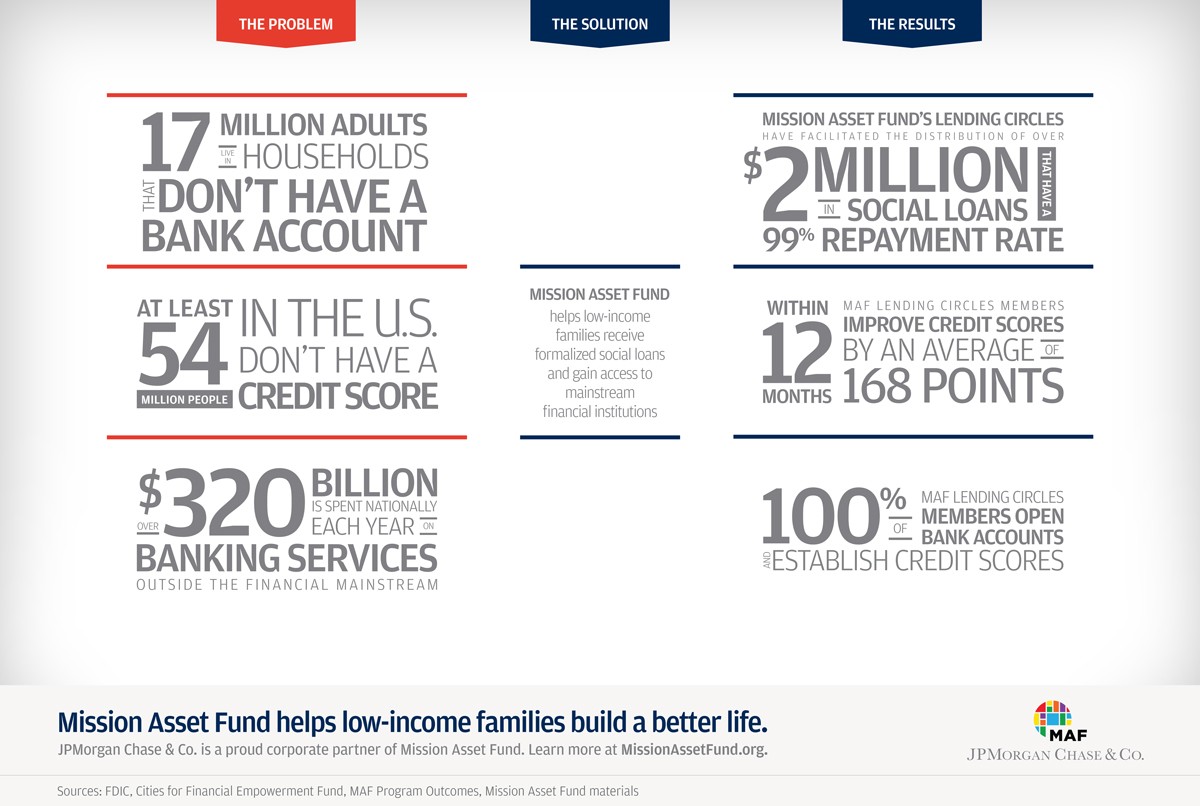 At least 54 million people in the U.S. don't have a credit score

Q: Talk about the lessons learned. What works in helping people gain access to these services?

A: José Quiñonez: When you understand an individual's financial pain points, you can then build programs and services that provide a safe and effective pathway into the financial mainstream. With Lending Circles, we provide access to social loans so people can help each other lend and borrow money to build their credit histories. We combine our programs with financial education so everyone gets the chance to increase their confidence and understanding of how the credit system works.

Q: What are some of the results of your work?

A: José Quiñonez: Everything we do at the Mission Asset Fund is data-driven. Since our inception, Lending Circles has helped hardworking families lend and borrow close to $3 million in social loans at zero percent interest. San Francisco State University conducted a study on our model and found that Lending Circles is proven to establish credit histories with a 90 percent success rate. The number goes to 100 percent for folks in their second Lending Circle. The study also found that the average participant – including individuals with established credit histories and those without any credit history – increases their credit score by 168 points within the first 6-10 months and that our members decreased their overall debt by more than $1,000.4

One of the most important things we have found is that social loans help people follow through with their commitments. Lending Circle default rates are less than 1 percent, which is really unheard of. In the micro-lending world the industry standard is about 10 to 12 percent. That's because our participants are not just making a commitment to some unknown entity — they're making it with each other.

Q: How is the Mission Asset Fund able to scale its model?

A: José Quiñonez: The issue of scaling Lending Circles has been foremost on our minds since day one because we knew that we were onto something big. We took a cue from our participants who rely on each other, and we're doing the same with nonprofits across the U.S. We train and provide technical assistance to our community partner organizations and help them implement the Lending Circles Program in their respective communities. To date, MAF has worked with over 65 different partner organizations in 18 different states and Washington D.C. And now, with the launch of the MyMAF mobile app, we're working to expand our partnerships in more communities in the years to come.