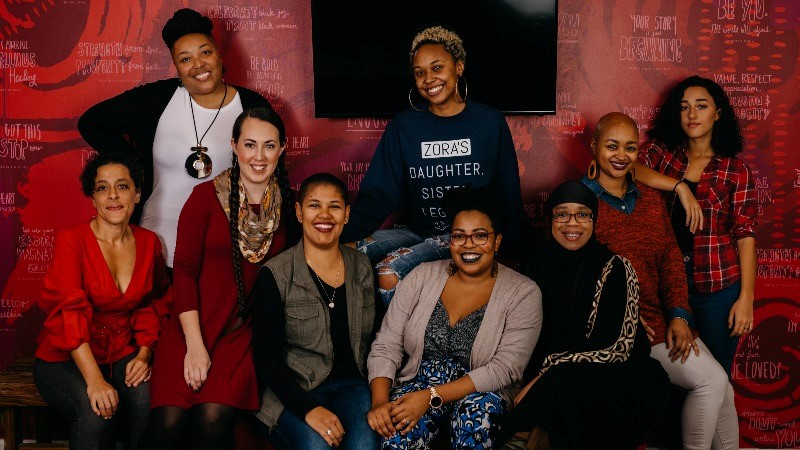 Zora's House is the only co-working space and leadership incubator in the state of Ohio – and one of very few in the country – that centers the unique needs, identities, and experiences of women of color.

LC Johnson, the nonprofit’s founder, says she likes to think of their mission as using financial literacy to catalyze and support the dreams women of color have for themselves, their families, and their communities.

“Research tells us that when women of color are able to thrive, their families and communities also thrive,” Johnson says. “And so I see the work that we do as supporting women of color, but also transforming our community.”

In her latest bid to transform community, LC is creating a robust new program that is hyper-focused on middle-income women of color who are first-generation wealth builders. JPMorgan Chase is supporting the pilot and testing of this uniquely trauma-informed and culturally competent financial literacy program.

We sat down with LC to discuss what the new JPMorgan Chase-funded program will mean to women of color in Columbus and beyond.

Q: Walk us through how financial education can be “culturally competent and trauma informed” – What are some examples of that?

I’ll use myself as one example of this. My family really struggled financially when I was growing up; we even experienced homelessness at one point. So I grew up not having a good sensibility around money. I didn't get a lot of financial education. When I ended up at Duke University, surrounded by a lot of rich kids, it was very different from how I grew up. There was this level of savvy around finances, around internships, around all of the things that help us think about how we move through our financial world as adults. When I was introduced to that, I realized that my personal background had a big impact on my financial knowledge and decision making.

But it wasn’t just personal - it was cultural, too. My mom’s grandfather, who she grew up with, was a sharecropper. His father was a slave. His niece integrated the University of Alabama. These are people in my family, only a couple generations back. I am a descendant of slaves and sharecroppers – and that is a cultural fact that impacts my financial background and understanding.

Some other examples not from my personal background:

There are less direct examples, too – because discriminatory laws like redlining that kept folks from being able to obtain or build wealth have created trauma in families for generations. The question for us is: How do you start to build financial education if you don't address that trauma that so many people of color have faced because of discrimination, redlining, slavery?

To me, it’s a no-brainer to think about how we are being trauma-informed and culturally aware when talking about finances.

Q: How did the idea for Zora’s House come to be?

LC: For me this work is personal and professional because it is wrapped up in my identity as a Black woman.

When I moved to Columbus, Ohio from North Carolina in 2015, I was really craving being in community with other women, especially women of color who understood certain parts of my identity and my journey in ways that I didn't really want to have to explain over and over again. I wanted to find a space where women of color could come together and get connected to people, resources, opportunities, and skills that they need to transform themselves and the world around them.

I really struggled to find that here. But as I was looking, I kept encountering so many other Black women and other women of color who were saying, "Girl, we don't know. If you find it, let us know." It clearly didn’t exist, and it clearly needed to – and so the idea for Zora's House was born.

Q: Why do you focus specifically on middle income women of color?

LC: When I started in the workforce, all of a sudden I found myself at a place where I was making more money than either of my parents. My husband was making more money than his parents ever made, too. And we were trying to figure out investing and life insurance and wills and retirement – and we had no one in our personal networks to turn to for advice on that. No one in our family had ever been in the place that we were, with the level of discretionary income that we had. We didn't have anybody who could say, ‘oh yeah, let me connect you with my financial planner.’

And what we started realizing is that there's this whole middle ground of what I call first generation wealth builders – folks who are in a different tax bracket than their parents, but also not quite what you would call wealthy. We are not talking about people making $500,000 a year. For many first generation wealth builders, they may be the first person in their family to ever own a home, or to make six figures, or to have a retirement deal outside of a factory job. Many of these folks are having children and moving up in their careers, and they don’t have the support they need to think about how to start to build generational wealth.

This is something I'm particularly passionate about when it comes to women of color because one of the things I often find is that - for a lot of people - women of color are synonymous with low-income women. Even when I was first launching Zora’s House, for example, many of the funders and partners I reached out to would suggest that I partner with homeless shelters and food pantries. We so often focus on the folks of color who are at the lowest end of that spectrum – and obviously we have a lot of work to do there – but people of color also exist outside of poverty. We actually exist across this whole wide spectrum, and we need support across that whole wide spectrum.

So for us, we are focusing on that middle-income woman – you're stable, you have a job, you have some of these basic things, your credit is pretty good…now how do we start talking about wealth? I think that is a powerful statement to make when we talk about anti-racist financial education.

Q: Tell us about the new financial literacy program that Zora’s House is launching.

LC: I'm really excited to work with JPMorgan Chase to pilot a new program designed specifically for women of color. The program begins with a 3-day retreat, followed by a 12-month facilitated cohort experience, all focused on culturally competent and trauma-informed financial literacy education. The overall goal is to increase confidence and knowledge, as well as build a network of like-minded peers to create direct pathways to greater prosperity.

JPMorgan Chase is one of those incredibly special supporters who is willing to fund pilots. This requires us all to be flexible and creative and a little bit visionary. They are saying, "Okay, here are some paint brushes, let's see what you can do." I've been really excited about the opportunity to test out this new model and see if it is something that's scalable. As our funder for this pilot cohort, JPMorgan Chase is really laying the groundwork for us to do something really special and unique.

Q: Do you find that your financial literacy education is a hard sell for middle-income women of color, or is it already a priority for them?

LC: We haven’t even launched this program yet, and we already have a waiting list. All we have to say is, "Oh, this program is coming," and women are like, "Where can I sign up?" It’s really a testament to the fact that this is unusual, and it's not the type of financial education that folks are used to.

I think most people are used to financial education – particularly from nonprofits and community-based groups – focusing more on survival and some of the basics. Of course that is really necessary and important work, but we’re a different kind of program that focuses on the next level – on getting past the basics and starting to think about wealth.

To learn more about the program, go to https://zorashouse.com/programs/woc-wealth-builders/