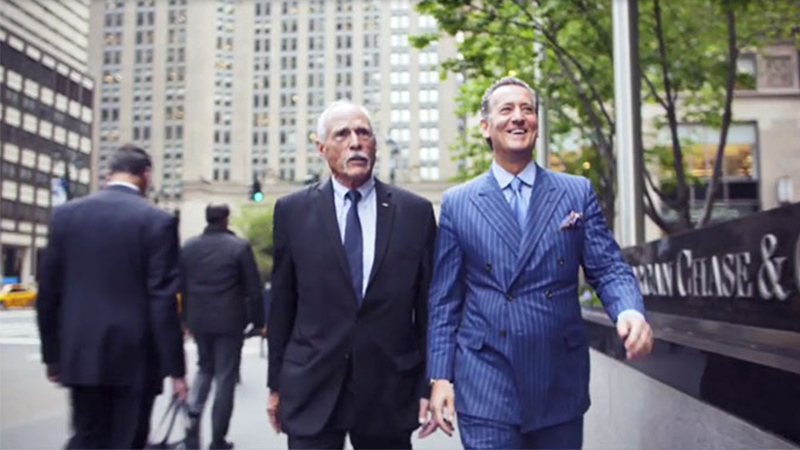 On screen: White text on a black screen:

On screen: The video opens with Vietnam-era film footage showing military planes, transport ships, and troops. Then a close-up of a man with white hair and a mustache. Text appears, briefly, on screen.

Robert: It was 1965, Vietnam was goin' on big time. Whether you were in the Air Force, or Army or Marines, we all knew instantly that we would all be in Vietnam. When the country calls, you go answer the call.

On screen: A photo shows Captain Robert Jones as a young man, in a flight suit, standing next to an aircraft. Next, a newspaper headline reads, "The Jones Boy Comes Home." Next, a photo shows a young Jones in an Air Force uniform. Then, a close up of Robert Jones, as he looks today, elderly and distinguished.

Robert: I was captured and I was a prisoner of war for five years and two months.

On screen: A close-up of Daniel, a man with black hair and a blue suit. Text appears, briefly, on screen.

Daniel: Here is a gentleman that, five-and-a-half years, he was a POW in Vietnam. Hearing his story and what he went through, for our country, for our freedom, it was just incredible.

On screen: Robert walks through a hall at Veterans Sourcing Group, and waves to workers at their computer stations.

Robert: Good to see you again!

On screen: Robert enters Daniel's office and gives him a friendly hug.

Robert: I was one of the lucky ones, really. I came back and I'm alive. I wanted to give back.

Daniel: Veteran Sourcing Group started six years ago. My partner John Cassese saw Signet about homeless vets in San Diego and, we're in the staffing business, so we decided, why don't we try to find them jobs?

On screen: In New York City, Robert and Daniel walk toward a J.P. Morgan Chase building.

Daniel: We go to companies like J.P. Morgan and we meet with hiring managers, we supply them with consultants. We'll give you their resumes, we'll fill the requests and requirements that you have.

On screen: A hiring manager in front of his computer screen speaks to an applicant on a video call.

Manager: Are you looking to stay within the corporate environment?

On screen: A woman with long brown hair, at a computer, speaks over a telephone headset.

Woman: You can reach me via email or you can...

On screen: Robert and Daniel meet with J.P. Morgan executives in a large conference room, overlooking Manhattan. Then, a close-up of Robert.

Robert: We are what's called a SDVOSB, which is "Service Disabled Veteran of a Small Business." And when you have that certification from the VA, that has been a real help.

Man: It's important for companies to work with diverse suppliers like us, because it's socially responsible to support businesses that reflect the customers they serve.

On screen: A diverse group of veterans hold up pictures of themselves in uniform. Then a close-up of Daniel:

Daniel: It's been a great partnership. Opportunities that we've had to place people impacts the growth of our business.

Robert: From the top level on down, J.P. Morgan has been committed to helping veterans join society again and be productive.

On screen: Robert, Daniel, and J.P. Morgan executives in a large conference room. An executive gives Robert a smile and shakes his hand.

Executive: We thank you for your business and for your service.

Robert: Thank you very much, I appreciate that.

On screen: The executives shake hands with Robert and Daniel.