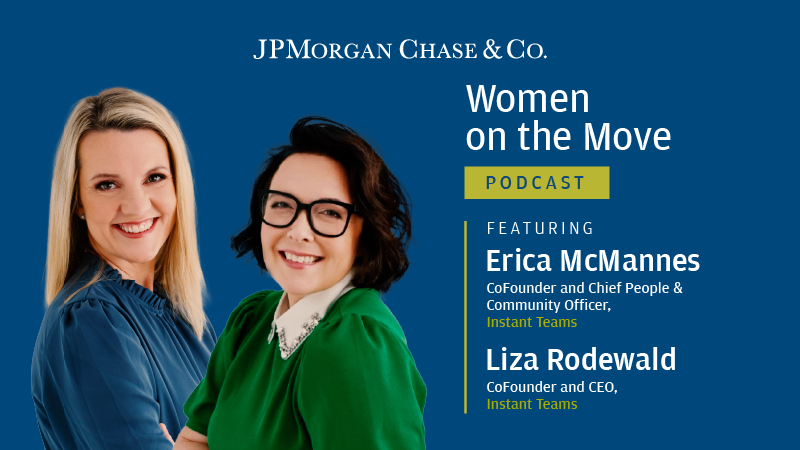 What happens when two military spouses—a software developer and an entrepreneur—combine forces? In this episode of Women on the Move, host Sam Saperstein finds out, as she talks with Instant Teams founders Liza Rodewald and Erica McMannes.

“Instant Teams is a remote team marketplace that builds remote workforces by tapping technology and the largest database of military connected workers in the industry,” Sam explains. “They are challenging the status quo and building a unique way for companies to diversify their workforce.”

Erica McMannes has been a military spouse for more than 20 years, moving 12 times in those two decades. Along the way, she experienced the challenges shared by military spouses in trying to build their own career amidst frequent moves. She eventually landed in “the Silicon Valley space” and put her varied experience to work launching start-ups.

Liza Rodewald, meanwhile, had a career as a software developer before her husband decided to return to active duty military service. Like Erica, she soon understood the common challenges faced by her peers. “Every single military spouse I would meet would ask me the same questions,” she tells Sam. “How are you working from home? How have you maintained your career? And can you help me do the same?”

Erica and Liza met and developed a relationship via a Facebook group, and only lived in the same place—Fort Lee, Virginia—briefly. But they kept up with each other, and when Erica came up with the basic idea of Instant Teams, she reached out Liza: “Am I crazy?” she wrote. “Is this an actual thing we could do?”

Liza, who had always been a solo entrepreneur and was in the final stages of launching another business, didn’t take long to get excited about Erica’s idea. “It was just really clear to me that I wanted a partnership and to really do something for this [military spouse] community in the remote workspace,” she recalls. Within months, working remotely before the pandemic had made it the norm, the two were making the VC rounds and launching Instant Teams.

Liza and Erica talk about how, as a talent marketplace, they serve two clients and solve two problems: that of employers and that of employees. By focusing on skills-based hiring rather than the standard chronological résumé system, Instant Teams offers career opportunities to the military spouse community who often get overlooked because of résumé gaps and other byproducts of the military lifestyle. Employers get direct access to a pool of candidates without having to post jobs and screen candidates themselves.

As a side benefit, skills-based hiring naturally promotes diversity in workplaces. “You're not just getting the same flavor of people when you're trying to hire, but you actually have diverse pipelines built in,” Liza says.

Erica and Liza founded Instant Teams with a focus on remote career opportunities before the pandemic even hit. As military spouses, they were both familiar with the benefits and challenges of working remotely. “I was doing gymnastics basically to try to create quiet spaces for myself, and closed one deal while I was in my car because my house was being packed up at the time,” Liza recalls. But once the pandemic normalized working from home, she says she began to realize she didn’t need to be so hard on herself for every little interruption. “We all have families,” she says. “We all have doorbells that ring or a dog that barks, and to see people as humans in the workforce I think was a really positive thing that came out of the pandemic.”

Erica emphasizes that fostering a positive remote work environment was also paramount at Instant Teams. “One of the first documents we ever created was called our Ethos to Remote Communication,” she says. “And this was pre-pandemic, and I look back and I think, wow, we were like pioneers, like look at us, charging ahead with remote communication.”

Today, they say, they’re proud of the work they’ve done to promote remote work opportunities to talented military spouses and others, as well as the opportunities they offer to employers to have a curated recruiting pipeline experience. “What we're building towards is something greater, not even just for the organization or for our teams or for our customers, but in a bigger sense of women in business and women in leadership,” Erica says.