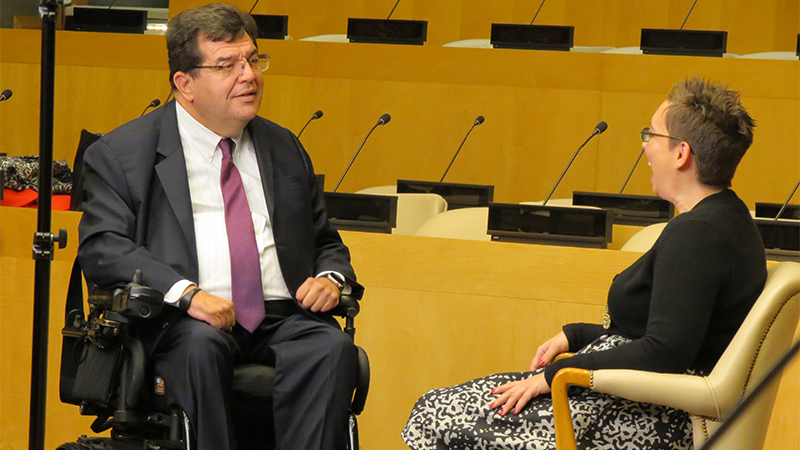 Jim Sinocchi, JPMorgan Chase's managing director with the Global Office of Disability Inclusion, discusses how a growing understanding of prejudice can change the way we view disability and prepare society for a new generation of leaders.

In 2020, amid the COVID-19 pandemic and the ongoing struggle for racial equality in America, intersectionality became a powerful tool for addressing prejudice. Coined in 1989 by American lawyer and civil rights advocate Kimberlé Crenshaw, intersectionality explores how different aspects of a person's identity combine to create different modes of discrimination and privilege.

But while society has focused its attention on a variety of prejudices—including race, ethnicity, religion, gender identity and sexual orientation—one form of discrimination has gotten far less scrutiny: Disability.

This is a problem I've experienced firsthand: As head of JPMorgan Chase's Global Office of Disability Inclusion, I work to advance opportunities for employees with disabilities and show their amazing potential for leadership. On a personal level, though, I've also come face to face with this discrimination: I'm paralyzed from the chest down, and I live and work in a wheelchair. With the necessary accommodations, I've become a senior executive. I've had the opportunity to not only advocate for the disabled, but also demonstrate what we—as a group—can accomplish.

Recent research released by the National Disability Institute (NDI) on Race, Ethnicity and Disability connects the dots on the impact of disability discrimination. NDI found “strikingly persistent disparities" in employment, income production and net worth between people with and without disabilities.

And, again, intersectionality plays a part: Those disparities grow even larger for Americans with disabilities who are Black, indigenous and Latinx. Additionally, NDI found that health and financial challenges posed by COVID-19 further widened this population's economic disparities.

One of the Institute's conclusions was particularly eye-catching: “The simultaneous experiences of discrimination and lack of access to economic opportunity—due to racism and ableism—deserves urgent attention."

A Need for Action

“Ableism" is not a new problem. A form of discrimination and social prejudice against people with disabilities, it is based on the belief that “typical" abilities are superior.

It would be nice to say that the 1990 Americans with Disabilities Act eradicated ableism, but that's far from true. While the landmark civil rights legislation was transformative in many ways, the fight for equality is far from over.

On July 26, 2020, the ADA's 30th anniversary, JPMorgan Chase hosted an employee webcast with disability rights activist Judy Heumann. Judy, a wheelchair rider like me, fought tirelessly to get the ADA passed and continues to champion equality for people with disabilities today.

Despite the progress we've made in three decades, Judy noted the fundamental prejudice that many people carry when she said, “I think consciously or unconsciously, people—not all people, but many people—look at us and think, 'How would I live my life if I were like Judy or Jim?'"

Judy nailed it with that remark. I have a full and productive life—regardless of my disability. I've been married more than 30 years to my wife, Maggie, who's able-bodied. She gave birth to our two children and, today, we are proud grandparents.

While I was already in a wheelchair when we met, people often assume that Maggie wouldn't have chosen to marry a quadriplegic. I can't tell you how many times during the course of our marriage she's been asked “Was your husband in a car accident?," “When did he become paralyzed?," or my personal favorite, asked by a restaurant waiter: “What would HE like for dinner?"

These people aren't being intentionally rude, but they're in unfamiliar terrain. Their comments are shaped by society's views of people who look different—or act or think differently.

The Need for Leaders

While stigmas are dissolving, they're not going away as quickly as we'd all like—and that's what we've set out to change at JPMorgan Chase.

With support from our Chairman and CEO Jamie Dimon and his leadership team, the Office of Disability Inclusion was created in 2016. Since then, we've endeavored to make our business more inclusive for people with disabilities. We've standardized the way we deliver reasonable accommodations and assistive technology to our employees and job applicants; we take a proactive approach to find—and do business with—companies owned by people with disabilities; and we continue to work to make our workplaces, branches and public buildings fully accessible.

Those examples are the result of our company's “Four A's" strategy—an approach that focuses on attitude, accessibility, accommodations and assimilation. A methodical, results-driven roadmap is necessary if you're serious about making headway in this area.

While our work continues to make JPMorgan Chase more inclusive, the people who are really driving game-changing results are our colleagues with disabilities. People like:

Dana Randel: A business analyst with Chase Home Lending in Plano, Texas, Dana has been deaf since birth. She proposed an idea that drove the development of Chase's first retail banking branch that is fully integrated with technology that enables our deaf and hard-of-hearing customers to do business. Located on H Street in Washington, D.C., this branch is near Gallaudet University, one of the top institutions of higher learning for deaf students in the U.S.

Sandhya Thakkar: A team leader with Agency Lending in Mumbai, India, Sandhya is partially paralyzed on her left side. She came to J.P. Morgan because she wanted to grow and be challenged. Now she's leading a team, proving her skills and training new colleagues without being viewed differently because of her disability.

Role models dispel myths about what individuals with disabilities can accomplish, and we are proud to have so many of them at JPMorgan Chase. To address ill-conceived notions and prove that people with disabilities are leaders, we've featured Dana, Lauren and Sandhya in a series of advertisements in CAREERS & the disABLED magazine, a leading resource for job hunters with disabilities.

Talent comes in all sizes, shapes and forms. If you have the qualifications, you can be a leader, a trail blazer and an incredible manager.

All you need is an equal opportunity to prove yourself.

People with disabilities have to prove themselves every day because they're already at a disadvantage. A blind lawyer I know navigates New York City's streets—and subway system—without assistance. One of my deaf colleagues says her ability to analyze body language and other nonverbal cues proves to be an advantage in her work with our customers. Of course, as a lip reader, she's had to overcome an additional hurdle during COVID-19: Face masks.

We need to tell these stories, and show that people with disabilities are overcoming challenges, because that's what leaders do. If we want to create more jobs and economic opportunity, then we need to capitalize on ability—and look beyond disability.

As Judy Heumann puts it, “The business community needs to do a better job in establishing what we are able to do—by dispelling views of what people think we can't do because of whatever type of disability we have."

Here at JPMorgan Chase, we could not agree more.