News & Events How a Bank Will Use 'Big Data' To Study the U.S. Economy

How a Bank Will Use 'Big Data' To Study the U.S. Economy

What if banks could tap into their vast network of consumer and business accounts to ferret out signals about where the economy is headed?

J.P. Morgan Chase is doing just that with the launch of a new institute that uses "big data"in analyzing hundreds of thousands of accounts for clues about income and spending patterns.

The institute's first report, released Wednesday, offers a deep dive into consumer finances and shows that income and spending remains volatile for the broad middle class, not just the poor. 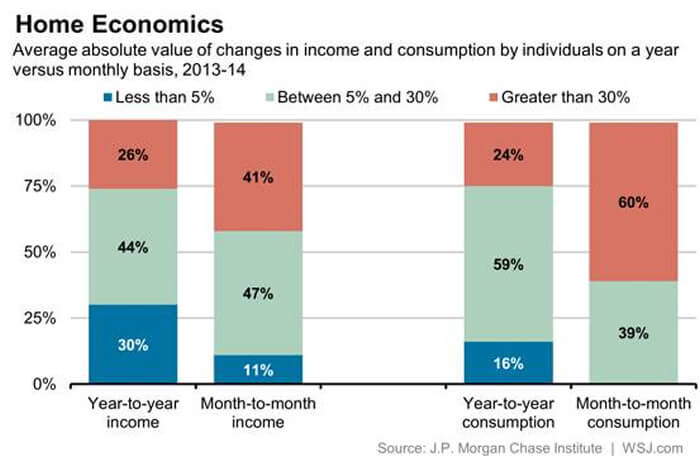 Average absolute value of changes in income and consumption by individuals on a year versus monthly basis, 2013-14.

How a Bank Will Use 'Big Data' To Study the U.S. Economy

The potential dividends from building this data asset aren't lost on Diana Farrell, the institute's chief executive. She learned first-hand about the need for real-time information about household financial behavior as a top economic adviser to President Barack Obama in 2009 and 2010.

"I can't tell you how frightening it was to be in the middle of the debacle of the recession and not have a good understanding of what was happening in the household sector. We were just starving for real-time information."

J.P. Morgan plans to build out its dataset so that it can look back historically, she said. The analyses of account data, which are stripped of any identifying information for bank customers, could help give insight into what Americans did last fall with their gasoline savings, for example.

Other findings from the institute's first run through its data lab:

Ms. Farrell said it isn't yet clear how to explain some of those statistics, so stay tuned.

The JPMorgan Chase Institute is a think tank dedicated to delivering data-rich analyses and expert insights for the public good. Its aim is to help decision makers–policymakers, businesses, and nonprofit leaders–appreciate the scale, granularity, diversity, and interconnectedness of the global economic system and use timely data and thoughtful analysis to make more informed decisions that advance prosperity for all. Drawing on JPMorgan Chase & Co.’s unique proprietary data, expertise, and market access, the Institute develops analyses and insights on the inner workings of the global economy, frames critical problems, and convenes stakeholders and leading thinkers. For more information visit: JPMorganChaseInstitute.com.