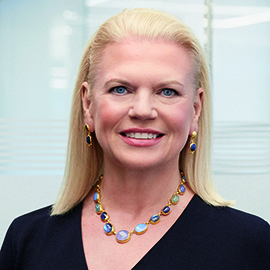 Mrs. Rometty is a member of the Business Roundtable, Council on Foreign Relations, Peterson Institute for International Economics. She is also a Trustee of Northwestern University and on the Board of Overseers and Managers of the Memorial Sloan-Kettering Cancer Center. She is also a former member of the President’s Export Council.