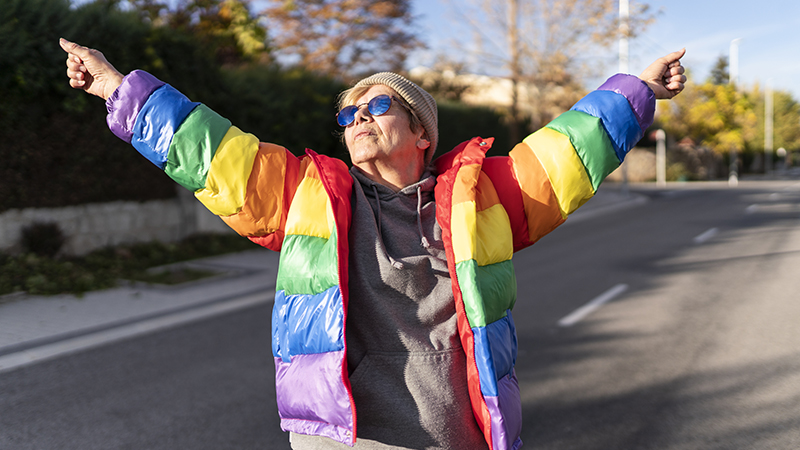 In the height of a pandemic, a nonprofit tasked with caring for LGBTQ+ elders needed to transform its training program. Here's how a group of technologists helped.

SAGE, the country's largest and oldest organization focused exclusively on assisting LGBTQ+ older adults, had a problem. One of the organization's programs, SAGECare, used a mix of in-person and remote-learning tools to train elder care providers—including home health aides, nursing home and assisted living staff, and hospice workers. The training model focused on in-person engagement, so access to online trainings was still developing, and SAGE was able to organize it with a learning management system that it had used for years.

Then, the pandemic hit—and social contact restrictions sent the demand for fully interactive courses soaring. Suddenly, need for health care workers was up, and SAGE's system was overwhelmed.

"We had to transition everything online," recalls Sadiya Abjani, SAGECare's Director of Training and Instructional Design. "So now this learning management system that was serving us fine became incredibly expensive and incredibly buggy because it was never meant for the thousands of people that we were training every month."

Unfortunately, Abjani didn't have the time—or knowledge—to fix the ever-growing list of issues on her own. "I'm a course builder, not an LMS expert," she explains. "It really hamstrung us—it was getting so buggy that we were losing clients over it."

In desperate need of a solution, SAGE reached out to Force for Good, a JPMorgan Chase program that that enables employees to dedicate 10 percent of their work week to help nonprofits develop technological solutions to their challenges.

JPMorgan Chase's partnership with SAGE dates back over 15 years, and in 2021, the bank strengthened this relationship, awarding SAGE a $1 million grant to fund the nonprofit's plans to enhance their now global outreach and support for the elder LGBTQ+ community.

Force for Good assembled a small volunteer team of technologists, including Hubert Noyessie Youombo, a software engineer with JPMorgan Chase in Jersey City, New Jersey. "I read a description of SAGE and that was the first time that I discovered that LGBTQ+ elders have this kind of program," Youombo says. "So it was, like, 'Oh, that's something I didn't know. I can learn from that.'"

Anish Sathe, another software engineer, agrees. "They were really struggling with their existing learning management system, and I'd never worked on one!," he says. "I think really the benefit came when I started working on it and realized the mission of the organization, what they do and how important it is to solve that problem."

"It made all of us more inspired to work that six months on this," he added.

One of the things Youombo and Sathe learned is why programs like SAGE are so important to the LGBTQ+ community. "LGBTQ+ elders grew up at a time of great prejudice and violence against their identities and their community," Abjani explains. "Add to that the HIV/AIDS crisis in the 1980s and you had a time period where LGBTQ+ elders were shown that they don't matter, that nobody cares about them, and that the government and medical industrial complex are not going to take care of them,"

In 2018, a study by the American Association of Retired People found that 52 percent of LGBT elders feared being forced back into the closet if they tried to access elder care services. More than 60 percent, it found, feared being denied service, being harassed or being abused in care facilities.

"I did not know that LGBT people had such specific needs," says Youombo. "And then I was surprised that, after so long, there was only the one organization to address this kind of need."

Sathe agrees. "I can hardly imagine 30, 40 years back what the situation was for LGBT people," he says. "These seniors, having been in that situation for so long, and still it's very hard for them to get all the necessary support."

The Force for Good team began its work by looking over SAGECare's resources and outlining what needed to be done. It was a wakeup call. "I hadn't realized how many clients and custodians they had or how deep their training catalog was," says Sathe. "Then I realized how little technology support they have—really, they have no technology support."

The team searched for a system that addressed SAGE's needs and took into account its limited resources. "We wanted to find a real solution that would help them migrate this big portfolio of training and support their customers, but that required no technology support," he added. "And part of the challenge was to figure out the right technology solution that cost less."

The project was forecast to take six months, but with the team's efforts, it ended up taking far less time.

"They took a couple of weeks, did a ton of research, and then did this presentation," says Abjani. "They thought that the transition was going to take months, but it ended up taking weeks because the system they found ended up being exactly what we needed."

"She was like, 'Oh my god, that's exactly what we need to solve the problem!,'" recalls Youombo.

And the bank's effort to help SAGE extends beyond Force for Good's work: JPMorgan Chase is continuing its philanthropic support and its consulting work with the nonprofit. “I am so proud to deliver vitally important support to the LGBTQ+ elder community, many of whom were the pioneers who forged our path for LGBT+ rights" says Brad Baumoel, global head of JPMorgan Chase's Office of LGBT+ Affairs.

Because the new training platform worked so well, SAGE was able to move forward its data migration by six months. "We just completed our transition to the new platform, we've shut down our old platform, and everything is easier," Abjani says. "Everything is easier: the reporting is much easier, the onboarding for new clients is much easier, we're able to do it all — and we're able to expand our business in a really interesting way because of the solution they found for us."