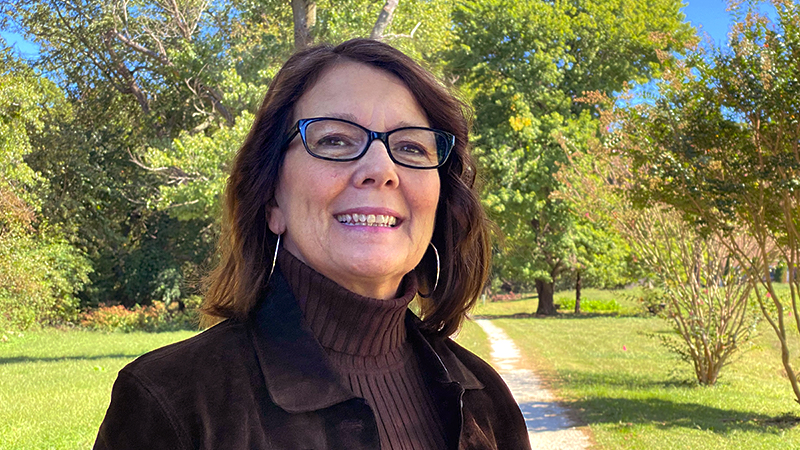 When Sitting Up Front Isn't Enough

For Karen Whitaker, supportive technologies—and a supportive community—gave her the tools to live a fuller life.

“The doctor said my parents should tell teachers to move me to the front of the class so I could hear better," she recalls. “Back then, if you didn't go to a school for the deaf, you were just supposed to get along. Growing up with an invisible disability, you learn to adapt and make adjustments."

And she did. Without realizing it, she learned to read lips and she rarely let others know about her disability, even though it sometimes presented enormous challenges.

“My teachers would often write on chalkboards while talking, with their backs to the classroom until they turned around to answer questions," she remembers. “I received a lot of 'pay better attention' evaluations."

Whitaker continued to compensate as a young adult, but her hearing difficulties continued to impact her life—and her career. She found jobs as a waitress, a bartender and in customer service, but listening and processing new information, something that usually happens simultaneously for people without hearing loss, can be a cumbersome two-step process for people who are hard of hearing. And it became increasingly arduous.

Whitaker also learned to ignore disparaging remarks when, if she missed what people were saying, she'd be criticized for not paying attention. Or if she spoke too loudly, which happened more often on the phone, because she was unable to hear the volume of her own voice.

“It was really upsetting to have people 'shush' me," she says. “Then I'd explain what was going on."

According to National Institute on Deafness and Other Communication Disorders, approximately 15 percent of American adults have some trouble hearing, and one in eight people aged 12 or over has hearing loss in both ears. Hearing loss can affect every dimension of the human experience—including physical, emotional and mental health. To make things worse, only one in five have devices to improve their hearing.

For Whitaker, it wasn't until 2010, when her hearing loss began to deteriorate to 50 percent, that things began to change. By then she was a single parent in her 40s, living in Texas and working for JPMorgan Chase. Although she was aware of the bank's commitment to disability inclusion, she also knew that insurance rarely covered the full cost of hearing aids.

When she approached corporate human resources to explain how hearing aids would make her a better employee, she was referred to a state program through which she eventually received her first pair of hearing aids.

Realizing What She Was Missing

“Until I got the services and equipment I needed, I had no way to truly understand how much I was missing," Whitaker says, remembering what it felt like to hear the quality of her mother's voice for the first time. “When I can hear better, I'm more alert and more engaged. It's the best thing I ever did for myself."

Her newfound knowledge and insights led her to look for a position that didn't rely so heavily on the phone, and she eventually moved back to the East Coast, where she was able to live closer to her aging parents. As an added bonus, her new manager was a friendly face: Anthony Lassiter, a former co-worker from Texas.

“When we worked together in Texas, she never mentioned her hearing impairment," says Lassiter, an operations manager for Mortgage Finance Operations. “But when she came East, she was upfront about it although we didn't talk about it much until COVID-19 and Zoom meetings came along, and she requested captioning."

A Texas co-worker, who Whitaker had offered as a job reference, had also helped Lassiter understand how best to train and work with her.

“I was thrilled with that advocacy," Whitaker recalls. “It's so important to have that kind of support."

Today, Whitaker works as a loan servicing analyst with Chase Mortgage Financial Operations. Her experiences with her current coworkers also reflect their ease of acceptance, which she feels is priceless and Lassiter views as critical to an inclusive workplace.

“Being upfront about a disability demonstrates that it doesn't diminish the value of your contribution to a workplace," Lassiter says. “As important as a person's privacy is, if you share your struggles, you may learn that others also struggle—and that benefits everyone."

That openness can also help ease the awkwardness that can come from being one's own advocate, despite knowing how important that is in both the short and long run.

“Open acknowledgement of an invisible disability can help normalize things and keep you from feeling that you can do with less, go without," Whitaker explains. “When family, friends and coworkers know how to empathize and be supportive, it contributes to sense of full inclusion—and isn't that what we all want?"

Hear stories from more of our employees who are thriving