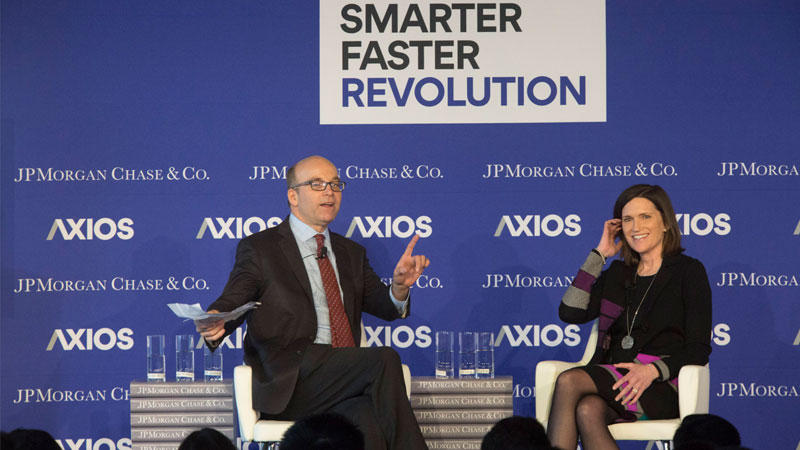 Planning for the Long Game in Your Career

After 24 years at JPMorgan Chase, Jennifer Piepszak, CEO of Chase Card Services has learned how weaving humility and humanity into the fabric of a culture can set a team up for success. At the third leg of the Axios Smarter Faster Revolution college tour, Piepszak shared invaluable lessons with New York City students on how to achieve professional longevity. The key, she shared: “Know that you’re here to learn and it’s okay to ask for help.”

Time and time again we’re told the importance of being intellectually curious. However, it’s so much deeper than that. It’s about asking questions and never being satisfied with an answer until you think it’s complete. That drive for the answer will position you as someone people continually want to work with.

There isn’t one set formula for success, but one imperative characteristic is grit. The person who embodies grit is able to meet and exceed their raw potential out of pure determination and hard work. When looking for young talent to mentor, find someone who has the hunger and passion for your job, but also has the humility to realize they don’t know it all yet.

Gone are the days of climbing the ladder in a linear way. Now, you’re able to scale the ladder like it’s a jungle gym. With that in mind, take risks and be willing to make a move that looks sideways on paper. Because nothing is really a sideways move when you’re acquiring new skills and making new connections.

Be an Intellectual Double Threat

In the working world you’ll be exposed to some of the most intelligent and thoughtful leaders in their space. What sets people apart isn’t their IQ, but their emotional intelligence, or EQ. It’s most important to create a culture where someone struggling feels comfortable coming forward with reservations or questions. “Ultimately, my job is to develop the talent around me and if someone is struggling quietly I’m not going to have the culture I want long term,” said Piepszak

Piepszak added, “One project I’m particularly passionate about is Bunker Lab, which is an organization that was formed to help veteran owned businesses through seed funding and educational programs.” Finding ways to utilize your professional skills for community good is a vital and engaging way to infuse purpose into your work.

About Smarter Faster Revolution
With increasing globalization and an even greater reliance on technology, the future of the workplace and the role businesses play is constantly shifting. Businesses are paving the way and enacting innovative strategies that are truly shaping the future of work. To help our younger generation get up to speed, JPMorgan Chase partnered with Axios to present the Smarter Faster Revolution campus tour series aimed at educating the next generation of workers—college students.

Read how other executives at our company are making bold moves.