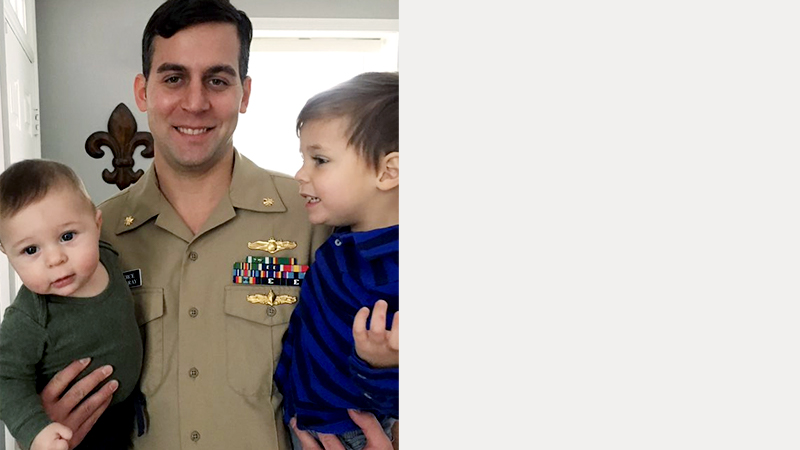 Pierce Murray is one of 2,000 Ohio Veterans Bringing Their Military Skills to JPMorgan Chase

Navy veteran Pierce Murray is no stranger to high work standards, team leadership, and efficient time management. After 12 years as an Operations Officer in the military, they are qualities he's mastered and that are core to who he is.

“You're talking to somebody who was in the military," says Murray. An Executive Director of banking operations at Chase in Columbus, Ohio, Murray is one of more than 2,000 veterans working for JPMorgan Chase in the state, and one of the more than 16,000 veterans and service members hired by JPMorgan Chase since their Office of Military & Veterans Affairs opened in 2011.

When Murray moved to Ohio, he was uncertain how he would successfully transition from military service into the corporate world, but after applying to several companies he eventually found his footing at JPMorgan Chase.

“What attracted me to JPMorgan Chase was their industry reputation, global presence, and track record with supporting veterans," says Murray. “Opportunities like the Military Pathways Development Program empowered me to use my skills as a veteran while giving me training I need to be successful at the firm."

Murray sat down with us to talk about his growth within the company and how the vast network of veterans within JPMorgan Chase's Ohio community contributed to both his professional and personal prosperity.

You entered JPMorgan Chase through the Military Pathways Development Program. What was that like?

It was fantastic! You go through two one-year rotations and choose different lines of business to explore. It's really a great program for military members who have strong leadership experience, are adept at crisis management, and have a broad skillset but may not have a traditional banking or financial services industry background. We're given the opportunity to explore different roles and land in a permanent role at the end of the two-year program.

How did you land your current position at JPMorgan Chase?

When I came into this program, I knew that I wanted to be a leader, but I didn't know what line of business made sense for me. But, my catch phrases from the Navy are “We jump into a fire, we jump into a crisis, and we figure things out. We get things going in the right direction." They served me well here.

I talked to a lot of colleagues about my military experience and they helped to guide me as I made the transition into the corporate world and recommended CCB Operations. That made so much sense to me and felt like the right fit given my background as an Operations Officer.

What was it like trying to fit into JPMorgan Chase as a veteran?

What's great is JPMorgan Chase creates opportunities for veterans to come together and connect with each other. They help us acclimate to this new environment. Even giving guidance on things that seem simple like calling people by their first name. You don't need to say “Yes/No Sir/Ma'am" all the time, which was helpful.

Like many other veterans, I was unsure of how I would integrate into the civilian world, and more specifically, how I would fit in at JPMorgan Chase. Although I was confident in eventually making my mark here, I was uncertain where to focus my time and effort in learning the ins and outs of the industry and the position I was sitting in. A very wise veteran mentor here told me that by focusing on my strengths, I could intentionally assess my knowledge gaps and weaknesses. I could create a plan to address and build up in those areas that were required to understand my team and their processes, in order to improve and innovate. I listened then to the advice and it continues to serve me well today.

Yes. That same veteran mentor told me to focus on those intangible skills I learned in the military. He said that I could never know everything, and, just like in the military, it was my job to lead and make the best-informed decisions.

Have you become a mentor to others?

Yes. I have supported many veterans transitioning into the civilian world, as well as those interested in a career at JPMorgan Chase. It is a personal imperative to help in others' journeys as I was helped during my own. I've opened my network to others, to link their interests and desires with people I know. I would liken it to matchmaking. I have connected interested veterans with recruiters, hiring managers, program managers, and other fellow veterans. I enjoy making the connections, many of which have ended in job placement in central Ohio and at JPMorgan Chase.

How have the veteran resources at JPMorgan Chase been helpful to you?

For me, the most useful veteran resource at Chase has been the Voices of Employees who Served (VETS) Business Resource Group.

With VETS, it's a perfect acronym! It just fits. It's for veterans. It's for their spouses. It's for their family members. It's for advocates. You have a built-in network of people who you can reach out to at any time and ask anything, personal or professional. Within this business resource group that focuses on veterans, there are employees from all military branches with varying times in service. So, you can network with the full spectrum of military experience.

How has being a veteran at JPMorgan Chase allowed you to give back to your community?

With the VETS Business Resource Group, we put on events here in the Ohio market, like supply drives and volunteering events. We also support Carry the Load, which is a national organization. And a few years ago, the National Veterans Memorial Museum opened here in Columbus. We participate in their events and volunteer our time.

I have supported many veterans transitioning into the civilian world, as well as those interested in a career at JPMorgan Chase. I feel it is a personal imperative to help in others' journeys, as I was helped on my own. I have connected interested veterans with recruiters, hiring managers, program managers, and other fellow veterans. “It's all about who you know" is often repeated, so I enjoy making the connections, many of which have ended in job placement in central Ohio and at JPMorgan Chase.

Why do you think it's important for organizations to invest in veterans?

Recent demographic information shows roughly seven percent of the U.S. population served in the armed forces in some capacity. These are citizens, like everyone else, some of whom were placed in the extremes of the human condition. Veterans bring a myriad of experiences to the workforce—from stress coping mechanisms to analytical approaches to mental endurance—veterans can add instant value and contribute to overall company success as soon as they parachute or march or sail into a new civilian role.

Learn more about the Office of Military and Veterans Affairs at JPMorgan Chase.