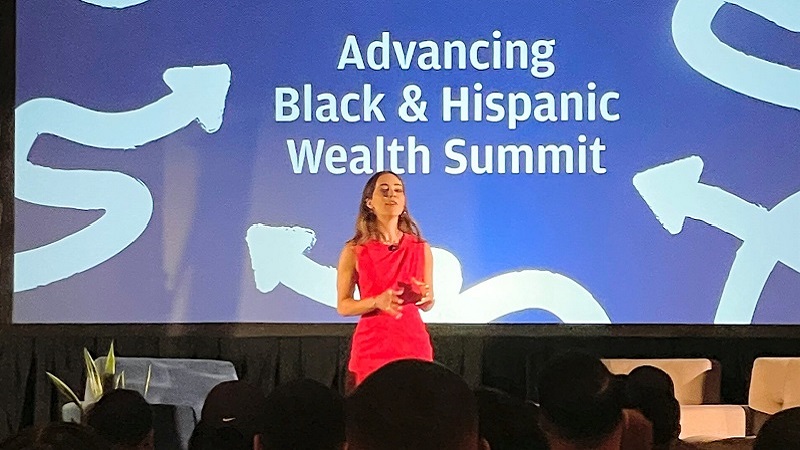 The global firm showed Dallas they are committed to uplifting Black & Hispanic communities by providing resources and access to capital.

The event kicked off with award-winning journalist, motivational speaker and Founder of GoLike, Mariana Atencio. Mariana shared her own personal journey as a minority finding financial freedom and the lessons she has learned. She also got the blood moving in the crowd and had everyone grooving to Jennifer Lopez’s hit song, “Let’s Get Loud.”

Following Atencio was Justin Grant, Chase Bank’s Executive Director of Community Development & National Partnerships/DEI. Grant spoke in detail on Chase Bank’s $30 billion dollar commitment to advancing racial equity by providing economic opportunities for Black & Hispanic communities. He said they have no interest in just “cutting the check,” they are serious about driving inclusive economic recovery and breaking down barriers of systemic racism. He also stated how Chase is making the commitment internally with their team as well. From the analyst all the way up to the C-Suite, you will see people of color represented at every level. And it was clear. As one gazed around the event space, you saw diversity amongst the local Chase Bank representatives. DW had a chance to speak with Justin Grant and asked why he thought this summit was important and what Chase hopes to achieve from it.

"This summit is part of a the Advancing Black Pathways commitment we started 3.5 years ago to use our expertise and resources to make targeted investments to strengthen the economic foundation of the black community. Our program is structured on 4 pillars; financial health & wealth creation, business growth & entrepreneurship, community development and careers & skills. 3 of 4 of those pillars are seen right here at this event. We encourage our community bankers to build relationships with black and hispanic famililies within the DFW area. We know to grow wealth, you're playing the long game. We want to be on that journey along with those families."

Grant continued to speak on the “how to” for that family seeking financial assistance from Chase bank. He advised to not only visit your local banker, but also visit Chase’s Financial Goals Hub and check out the available resources. There you can get a financial health check up and check out tools to have you save and invest.

The first panel discussion was moderated by Executive Director of JPMorgan Wealth Management, Ryan Hawkins featuring Triple Emmy award winning journalist, best-selling author, and entrepreneur Gaby Natale along with master stock investor, and founder of Red Panda, Ian Dunlap. Natale and Dunlap continued the conversation by sharing their own experiences attaining financial freedom. Gaby Natale used a self-coined term, “Financial Greencard” which is having the ability to work because you want to and not because you have to. She spoke on some of the lessons she learned through her financial mistakes but also advised the crowd that not all debt is bad debt. Natale explained that a significant part of attaining your financial goals is through financial literacy. She also had a special message for women and those raising young women, that it’s okay to be financially ambitious. It’s okay – and ultimately beneficial – to be financially independent.

Ian Dunlap shared stories with the attendees on his very first investments and lessons he learned. One thing he emphasized to the crowd was our power in controlling the markets we consume through investments. He asked “whats the biggest shoe company in the world?” and “what is the largest computer company on the planet?” Naturally, the attendees quickly answered “Nike” and “Apple”, but his point was to show that Black & Brown people don’t need any special training or certifications to be an investor, we just need to make the choice to invest versus consumption. DW had the opportunity to chat with Ian Dunlap as well. We asked the investor & entrepreneur on the importance of teaching young Black and Hispanic kids about finance and what young adults can do to reinvest in their communities.

"100% of us in the community don't know how to invest. When I was a kid, we didn't talk about money. But I believe that once you learn, it empowers you to do more. This about breaking generational practices in our community. Think about how much different everything would be if all of our grandparents and great-grandparents were doing life insurance or real estate investing, we'd all be a hell of a lot richer as a people... (For tools to teach the young) I would advise you check out my show Market Mondays or check out Youtube for 3-4 minute videos for investing advice for your kids."

While on the panel, Ian also stated that our children will mimic what you do and not what you say. That’s why it’s imperative to not only talk with your children about money but be transparent so that they don’t make the same mistakes. And for the college graduate from the hood, it’s okay to reinvest back into your community, just do it wisely. He advises young adults to make the community investment a group effort, so that the impact can go a lot further. Dunlap stated, “One of the reasons they don’t want to come back is safety. But, if there are 15-20, you then can build an environment where things are a lot safer.” Before exiting the stage, Ian asked the crowd to stand and recite with conviction, “I deserve to be rich! I deserve to be happy! I deserve to be wealthy! I deserve to be free!”

After the panel conversation with Natale and Dunlap,  Alice Rodriguez came on stage to moderate the next panel discussion. Alice is the Head of Community Impact and Managing Director at JPMorgan Chase & Co. She was joined by entertainment executive and celebrity financial expert, Dr. Lynn Richardson and hip-hop legend, TV producer, DJ, and philanthropist, MC Lyte. Although MC Lyte dropped her first album at the age of 16, she stated the facade about the music industry is the idea that there is always money to be made later. She recalled people telling her it was okay to be frivolous because there is always another album or tour to make money from, but that’s not always the case. Dr. Lynn Richardson told an all too familiar story of growing up poor, getting a great education in order to attain a well paying job, but still found herself in financial distress. Richardson made the crowd chuckle saying,”You know how some people work check to check? Well I was living check to Monday!” Both panelists expressed their gratitude for JPMorgan Chase to create multiple avenues for Black and Hispanic people to attain financial freedom.

Following Dr. Richardson & MC Lyte’s panel discussion, guests had the option to meet with Chase bankers and participate in breakout sessions to discuss their own financial health goals. The final panel conversation moderated by Racquel Oden, Managing Director and Head of Consumer Bank Network Expansion for JPMorgan. This panel discussion featured Daymond John who is the founder and CEO of FUBU, Star of ABC & Shark Tank, and CEO of the Shark Group. And he was joined by the CEO of SO’B Productions, journalist, producer and philanthropist, Soledad O’Brien. Prior to the summit in Dallas, she chatted with DW’s Publisher, Patrick Washington,  and emphasized the importance of creating generational wealth, which should start in the home. O’Brien states, “There are so many important conversations around financial freedom, entrepreneurship, wealth and legacy building, many of which I cover on my radio show Everyday Wealth, but too often Black and Hispanic audiences are left out. I am honored to join JPMorgan Chase in centering communities of color around creating generational wealth.”

JPMorgan Chase’s Advancing Black & Hispanic Wealth Summit was organized by both Advancing Black Pathways and Advancing Hispanics & Latinos.  The Advancing Black Wealth tour kicked off in Los Angeles and will also make stops in New Orleans and Philadelphia in 2022. The tour will host prominent Black business leaders and entrepreneurs who will engage with attendees through panel discussions and interactive workshops.

A version of this story originally appeared in Dallas Weekly.