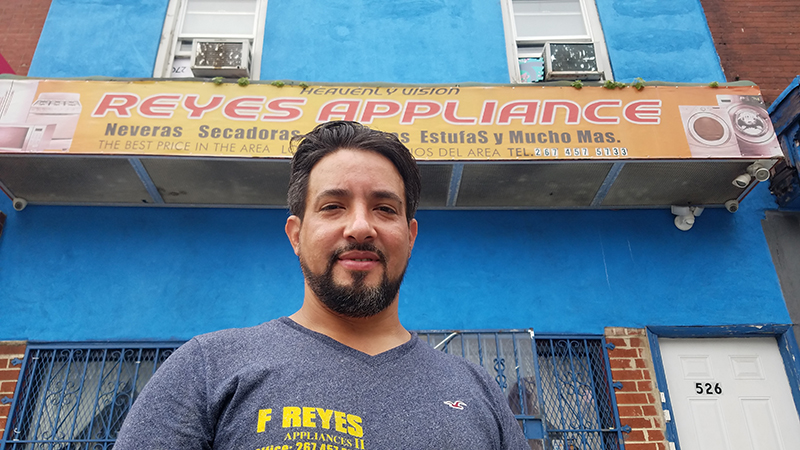 With help from JPMorgan Chase, Fausto Reyes set up a blossoming repair shop, reviving his community and paving a new path to opportunity for his children.

When Fausto Reyes was growing up in the Dominican Republic, he didn’t play with ordinary toys. While his 16 siblings spent their free time spinning tops and throwing baseballs, he amused himself by taking apart and repairing old appliances in his backyard.

Three decades later, Reyes is still fascinated by electrical appliances. But, instead of toying in the backyard of his family home, he’s making a living with his hobby: he owns a "scratch and dent" appliance store in Philadelphia’s Kensington neighborhood, where he repairs and resells lightly-used home appliances.

Building a business…and a future

It’s been a long road from the Dominican Republic to Philadelphia. Under his older brother’s watchful eye, Reyes progressed from his backyard tinkering to doing electrical and repair work in homes around Santo Domingo, their home city. When he was old enough, he took classes on electrical repair and started his own business, a refrigerator repair shop, which he ran for 14 years.

In 2013, Reyes’ younger brother came to the US, and set up shop in Kensington. A year later, Reyes followed. With his technical and business expertise, he soon took over the business.

“I didn’t even know what Kensington was before moving to Philadelphia,” Reyes said. “But I feel comfortable here. The community makes me feel at home, and the business is ideally located along a commercial corridor, so we get a lot of visibility.”

But while the transition was quick, it wasn’t easy. “At the beginning it was difficult because of the language barrier, the culture, and the fact that it gets very cold here,” Reyes says. “It never gets cold in the Dominican Republic.”

Another challenge was his family: Reyes arrived in the US alone, and it took him a while to bring two of his children to join him.

To get the money he needed to build his business—and bring his family to the US—Reyes needed help. That’s where FINANTA stepped up to plate. The community development financial institution (CDFI) helped Reyes strengthen his credit and bookkeeping. With technical assistance from FINANTA’s officers, Reyes was able to incorporate his business which set him up to be approved for working capital. Reyes used the microloan to build his inventory and purchase property.

Since then, Reyes has increased his revenue by nearly 70 percent.

“Truthfully, I wouldn’t have the property or the business I have if not for FINANTA’s help,” Reyes said. “They helped me from the start. I might not be where I am today – life would definitely be a lot more challenging.”

FINANTA is part of a coalition of CDFIs supported by JPMorgan Chase’s $5 million commitment to support the revitalization of the Kensington Avenue community and commercial corridor.

For Reyes, carving a path for his children’s future is most important. He wants his kids to study hard, learn a lot, and have more options than he did to move forward in America.

“If they like what I am doing, I would like my family, my kids, to continue doing what I am doing,” he said. “They could help grow, manage, and expand the business into the future.”