Miami is a diverse city that has experienced strong, if slowing, economic growth since 2013. Forty percent of Miami residents are foreign born and 68 percent of metro Miami residents are non-White or Hispanic (2017 5-year ACS). While gross domestic product (GDP) is only one measure of economic output, Miami had the twelfth highest metropolitan area GDP in the country and accounted for over 2 percent of national GDP in 2017. Although annual GDP growth in Miami has been positive since 2013, it slowed from a high of 6.6 percent in 2014 to 2.4 percent in 2017 (Bureau of Economic Analysis, GDP by Metropolitan Area).

Our data asset provides a unique view into Miami’s small business sector, and helps identify where growth may be contributing to Miami’s economic strength.

This brief leverages a subset of the data asset used by Farrell et al. (2019b), and focuses exclusively on the Miami metro area. The full sample of all 25 U.S. cities was constructed from de-identified Chase Business Banking deposit accounts, and includes firms that are both employers and non-employers. However, our sample does not capture firms that operate informally or have deposit accounts with a bank other than Chase. 1 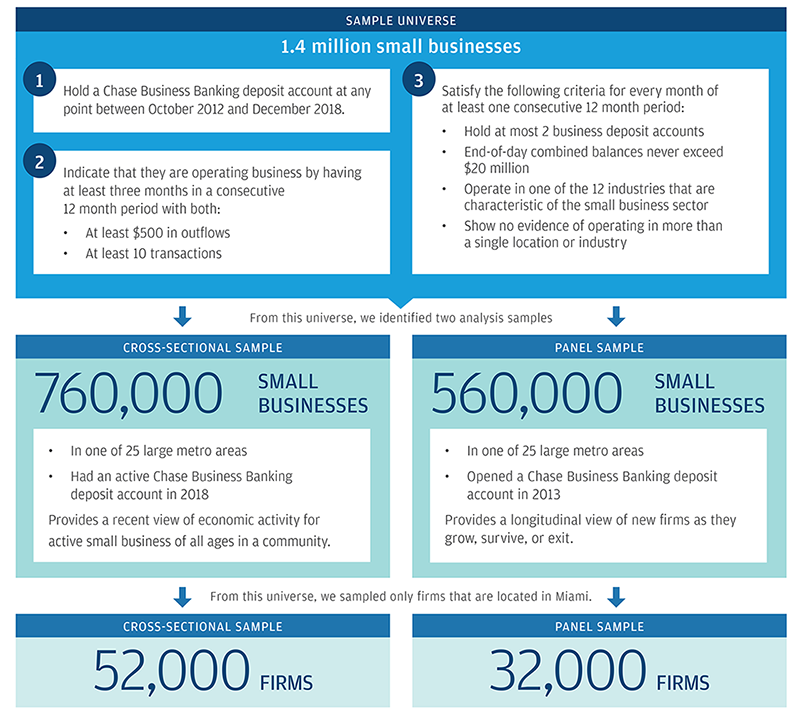 The industry distribution of small businesses in Miami is similar to the distribution in the full sample of 25 major U.S. cities. Miami has a slightly higher share of professional services, construction, and repair & maintenance firms, and a slightly lower share of restaurants and retail firms as compared to the full sample. Of the 52,000 firms in the Miami sample, 93 percent are non-employers, and the median age of a firm in our sample is four years.

The Miami metropolitan area is comprised of Miami-Dade, Broward, and Palm Beach counties in southern Florida. It includes several principal cities: Miami, Ft. Lauderdale, Boca Raton, Hialeah, Pembroke Pines, and West Palm Beach. In this brief, we use the term “communities” to refer to each of the 178 ZIP codes that comprise the Miami metro area.

Small businesses can make substantial contributions to their communities. These contributions include investing in local projects, spending revenues locally, and being actively involved in a community’s civic culture. Farrell et al. (2019b) explored small business outcomes by looking at firms’ profitability and cash liquidity in the full sample of 25 U.S. cities. Here we look at the same outcomes for businesses in the Miami metro area.

Figure 1: Most small businesses in Miami were profitable 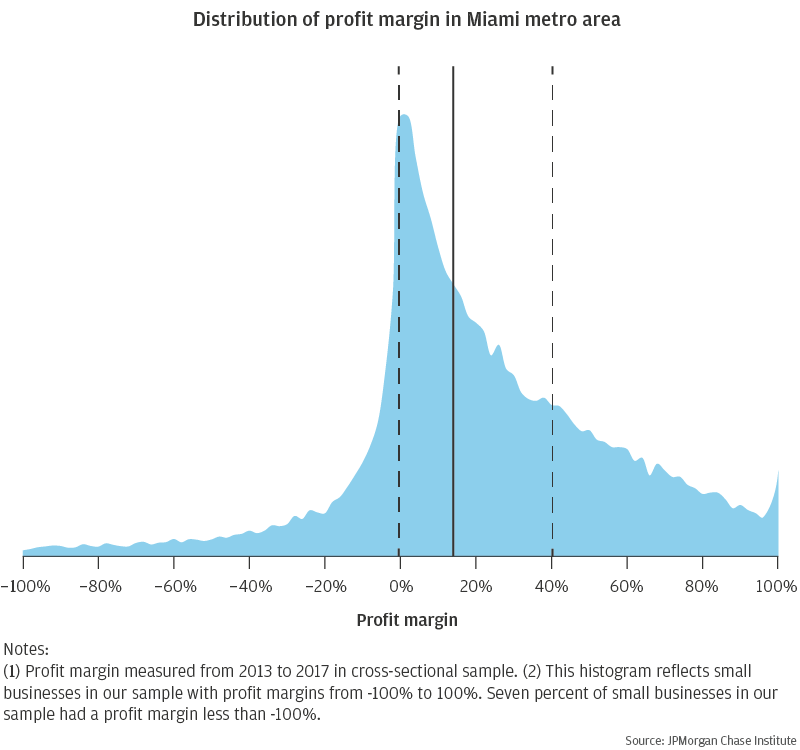 Figure 2: Many small businesses in Miami had limited cash liquidity 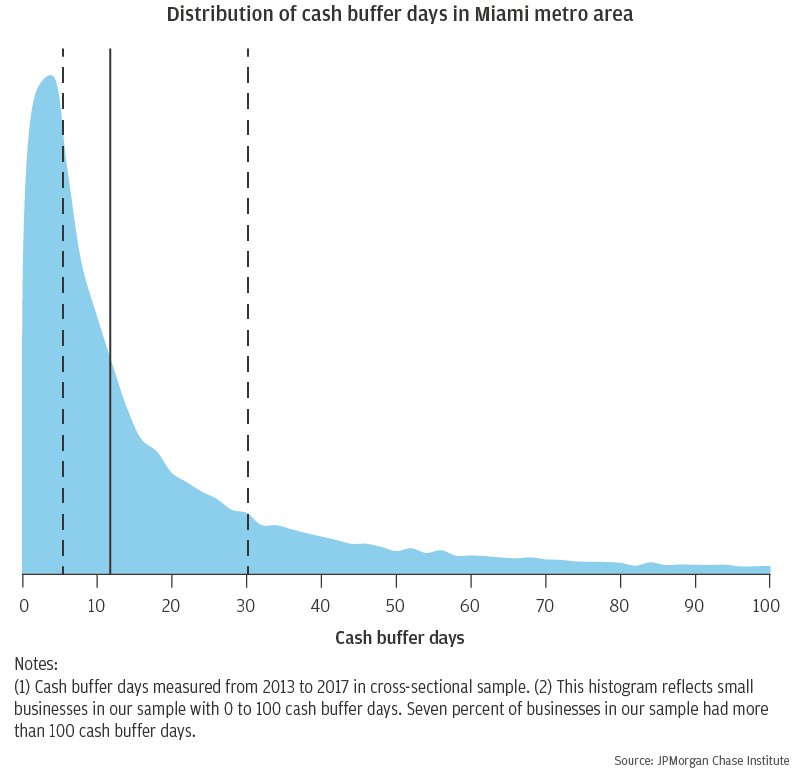 Overall, the community-level structure of small business profitability and cash liquidity in Miami was stable. Figures 3 and 4 illustrate this stability by showing the change in median community profit margin and cash buffer days between 2014 and 2018. Both figures contain two panels: panels 3a and 4a show the change in relative ranking of each community between 2014 and 2018 by quartile, and panels 3b and 4b show the absolute change in median profit margin and cash buffer days from 2014 to 2018, respectively.

The two panels of Figure 3 provide two perspectives on changes in median community profit margins. Panel 3a shows the relative change in median profit margin by sorting each community into quartiles in 2014 and 2018, and then finding the difference between the community’s 2014 and 2018 quartiles.2  The map shows that over half of the communities in metro Miami did not change profit margin quartile over this time period. Less than 40 percent of communities moved a single quartile, and only nine communities (5.2 percent) had a negative shift of more than one quartile.

Figure 3: Few communities changed their relative profitability, though most saw increases between 2014 and 2018 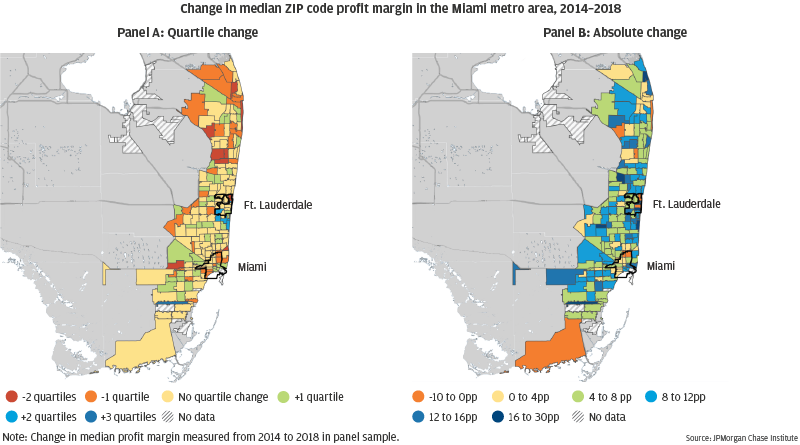 Two panel maps showing the change in median ZIP code profit margin in the Miami metro area between 2014 and 2018. Over half of the communities in metro Miami did not change profit margin quartile over this time-period. Less than 40 percent of communities moved a single quartile, and only nine communities had a negative shift of more than one quartile.

The two panels of Figure 4 provide a parallel view of changes in community-level small business cash liquidity. The overall structure of community-level cash liquidity showed a stability similar to profitability. Panel 4a shows that 58 percent of communities remained in the same cash liquidity quartile from 2014 to 2018. While cash buffer days increased in most communities from 2014 to 2018, these increases were generally modest. Seventy-five percent of communities saw an increase in median cash buffer days of three days or fewer, and 14 percent of communities saw a decline in median cash buffer days. This continues to support our finding that although metro Miami firms are increasing profit margins, they are not experiencing similarly strong increases in cash liquidity. This may suggest that firms do not believe that they need to maintain cash savings, or that they may need to spend a large share of revenues in order to continue business operations. This is in contrast to much larger businesses nationally, which have generally accrued large liquid cash balances since 2012 (Kopp 2018).

Figure 4: Few communities changed their relative cash liquidity, though most saw increases between 2014 and 2018 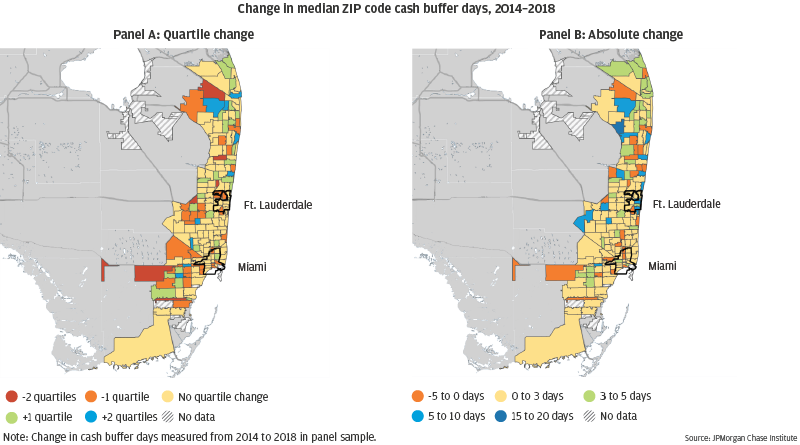 Many factors within a community can contribute to its economic success generally and to the success of its small businesses specifically. To understand how the socioeconomic differences between communities are associated with the small businesses within them, we measured profit margin and cash liquidity against two variables: home value and the share of a community’s adult population with a college degree.

Scatter-plot showing the normalized home value and cash liquidity. There is a negative relationship between these two factors, meaning the share of firms in a community with fewer than two weeks of cash liquidity was comparatively high in communities with low relative home values. The correlation between normalized home value and the share of firms with fewer than fourteen cash buffer days was -0.61.

College education is often used to proxy human capital, and has been positively correlated with individual well-being outcomes. These outcomes may aggregate to positive community outcomes. We measure the share of college graduates by finding the share of a community’s adult population that has an associate’s degree as estimated in the 2017 5-year ACS estimates.

Cells with blue diamonds in Table 3 indicate that the share of firms in an industry for a given community type was above the Miami metro share of firms in that industry. Industries that were more prevalent in majority White communities (high-tech services, other professional services, and real estate) were less prevalent in non-White communities. Communities with a majority ­­maintenance industries. Firms in each of these industries were among the most overrepresented in majority Black communities when compared to the metro-wide share. For example, the share of construction and repair & maintenance firms in majority Black communities were 3.3 and 4.5 percentage points higher than the metro share, respectively. 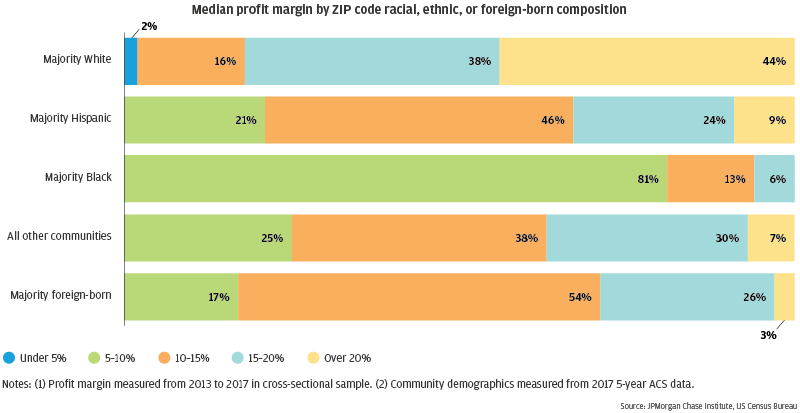 Stacked bar chart showing median small business profit margins by ZIP code racial, ethnic, or foreign-born composition. 44 percent of majority White communities had median small business profit margins greater than 20 percent, while no more than 9 percent of any other community racial, ethnic, and foreign-born demographic group had median profits at that high a level. Only one-in-twenty majority Black communities in Miami had a median profit margin over 15 percent. 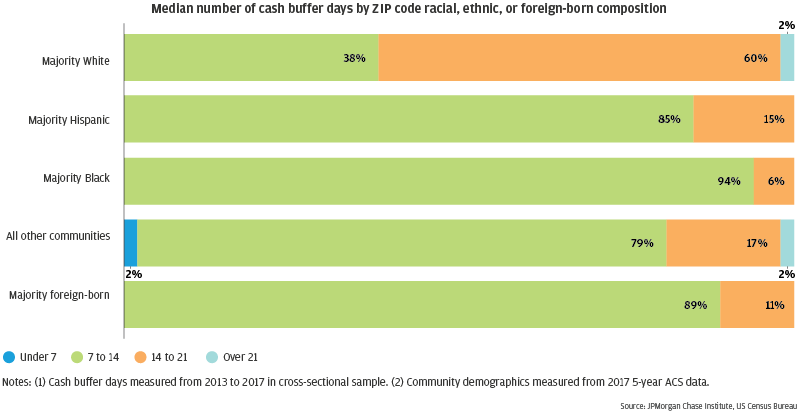 While small businesses in the Miami metro area have slightly stronger profit margins and slightly weaker cash liquidity measures than those in our full sample, we found substantial variation in these outcomes across the many communities that comprise the region. Moreover, the differences we observed across communities appeared stable over time, suggesting that other structures that might affect small business financial performance are persistent as well. Importantly, these community-level differences were persistent during a period of broad growth in the Miami regional economy.

Taken together, these findings are broadly consistent with the findings from our larger sample, which suggests a similar set of policy implications. First, broad-based economic growth in the Miami economy may benefit from place-based small business economic development programs. Second, programs and policies intended to help small businesses—either national or specific to the region—may be more effective if they are integrated with initiatives that address household financial wealth and education. Finally, the differences we found suggest that programs that support small businesses could be more responsive to the characteristics of the businesses in communities where people of color and immigrants live.

1.For more information on the full sample construction please see Farrell et al. (2019b).
2.To find the relative change by quartile, we first found the median profit margin and cash buffer days for each community, and then placed each community into a quartile based on the median values in 2014 and 2018. We placed communities with median profit margins or cash buffer days below the 25th percentile in quartile one and placed those above the 75th percentile in quartile four. To calculate quartile mobility we subtract the community’s 2014 quartile from the 2018 quartile. A negative number indicates that the community moved to a lower quartile, while a positive number indicates that the community moved to a higher quartile. Prolonged periods without any quartile change may suggest limited relative community mobility. Panels 3b and 4b show the change in median community profit margin between 2014 and 2018. This is calculated by subtracting each outcome’s 2014 value from its 2018 value.
3.See Farrell et al. (2019b) for further discussion of using home values and college graduate shares as comparisons to local economic decisions.
4.We define “all other” communities to be communities where one racial or ethnic group does not make up the majority of the population, and for the purposes of the following figures, the first four groups are mutually exclusive.

This brief reflects substantial analytic and drafting efforts from Nicholas Tremper, prior analytic work from Carlos Grandet, leadership and process management from Chi Mac, and meticulous fact-checking from Anu Raghuram. We thank each of them specifically for their hard work and contributions to this research.

We are also grateful for the invaluable constructive feedback we received both from internal colleagues and external academic and industry policy experts, including but not limited to Maria Ilcheva and Stanley Rigaud. We are deeply grateful for their generosity of time, insight, and support.

Finally, we would like to acknowledge Jamie Dimon, CEO of JPMorgan Chase & Co., for his vision and leadership in establishing the Institute and enabling the ongoing research agenda. Along with support from across the firm—notably from Peter Scher, Max Neukirchen, Joyce Chang, Marianne Lake, Jennifer Piepszak, Lori Beer, and Judy Miller—the Institute has had the resources and support to pioneer a new approach to contribute to global economic analysis and insight.