The coronavirus pandemic has swiftly changed the financial picture for American households largely across the board. In order to better understand the economic impact of policies that were implemented in response to the virus, such as stay-at-home orders or stimulus payments, policymakers and researchers are taking a close look at families’ financial behaviors like saving and spending. Research drawing on JPMorgan Chase Institute data sheds light on that picture, revealing important insights about the effects of the pandemic on households’ consumption and how government stimulus and insurance programs played a role.

In a report released as part of Brookings Papers on Economic Activity, the JPMorgan Chase Institute draws on unique, de-identified banking data from U.S. households to investigate the effects of the pandemic on families’ spending and saving based on their income levels and industry of employment. We find that across the board, families cut their spending from March to early April and, at the same time, increased their liquid asset balances.

Overall spending fell by more than 35 percent in the second half of March. While spending began to increase in April, it remained substantially depressed through the end of May. Interestingly, when spending begins to recover mid-April, it recovers much more rapidly for low-income households than for high-income households. Consistent with the pattern we find by income, workers in industries with low average pay initially cut spending slightly less and then have spending which recovers more rapidly. In other words, a family’s income level appears to matter more for spending than their industry of employment. 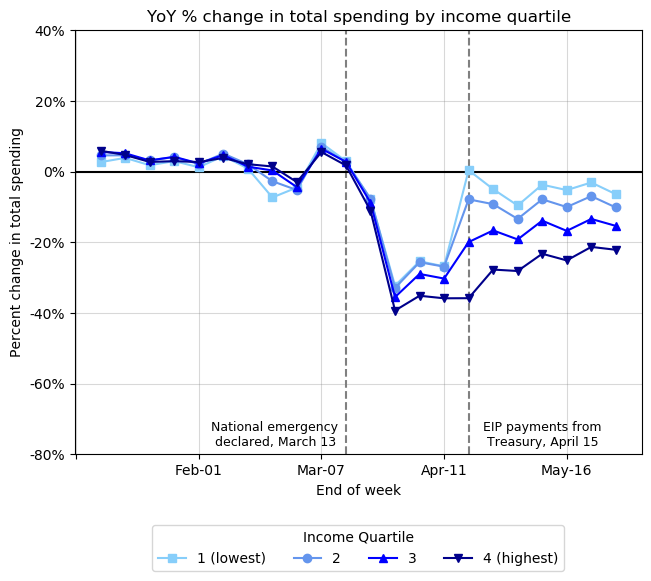 In regards to savings behavior, we find that household savings levels also increased by a substantial 35 percent. These greater savings can largely be explained by two changes: a substantial decrease in spending that began in mid-March and federal government stimulus that provided unexpected income. Liquid balances increased the most for lower-income families, whose growth in savings seems to be attributed to an initial drop in spending paired with income from federal stimulus checks (Economic Impact Payments) and expanded unemployment insurance benefits. For higher-income families, savings appear to be driven more by a substantial drop in spending. 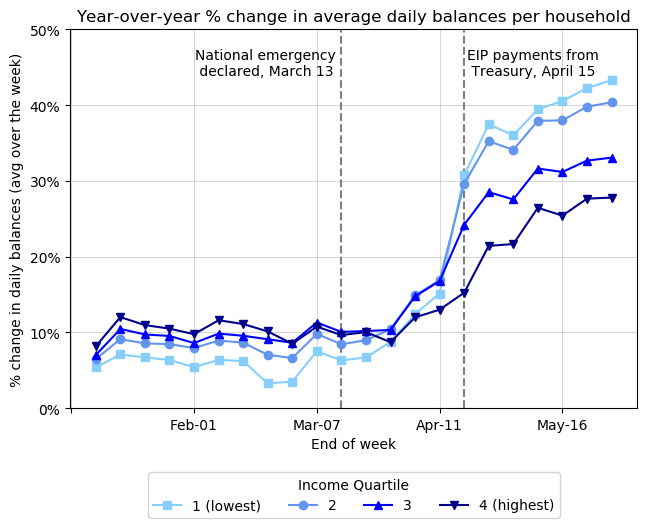 While households who entered the pandemic with low levels of cash on hand saw their checking account balances shoot up around the time stimulus payments were received, our analysis reveals that balances soon began to decline, suggesting that the additional funds have been used up fairly rapidly.

As policymakers consider how to support economic recovery most effectively, it will be important to continue watching what happens to families’ levels of spending and savings. While it may be too soon to draw hard conclusions, there is reason to think that the gains in wealth distribution for lower-income families may not be permanent and the pandemic could have impacts on savings that, overall, exacerbate the wealth gap that existed before the crisis. Absent additional government stimulus, households who face job loss may need to spend what they have saved (or take on debt) just to keep up with bills and necessary expenses, whereas those with job security still receive income and may save more than they would otherwise just by nature of there being fewer places open to spend.

Finally, Institute research has repeatedly demonstrated the importance of liquid savings for maintaining financial resilience during times of uncertainty, and this recent report demonstrates the meaningful role for government support in stabilizing financial disruptions that families have experienced during the current pandemic.

The disproportionate increase in savings seen from lower-income families, for example, very likely reflects the fact that stimulus checks and expanded unemployment insurance benefits provided a substantially more important income cushion for lower-income households than higher-income households. Depending on the extent to which these disruptions continue, policymakers need to consider that more funding to lower-income families may be necessary to maintain their spending and prevent hardship.

These findings draw from a longer paper which was released as part of the  Brookings Papers on Economic Activity, on June 25, 2020. Read more of the Institute's research here.