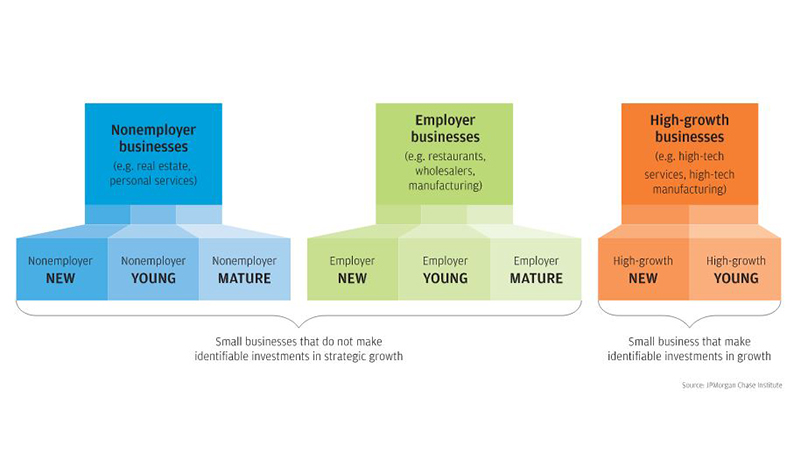 Small businesses that do not make identifiable investments in strategic growth:

Figure 2: Industries Vary in their Share of Employer and Nonemployer Small Businesses 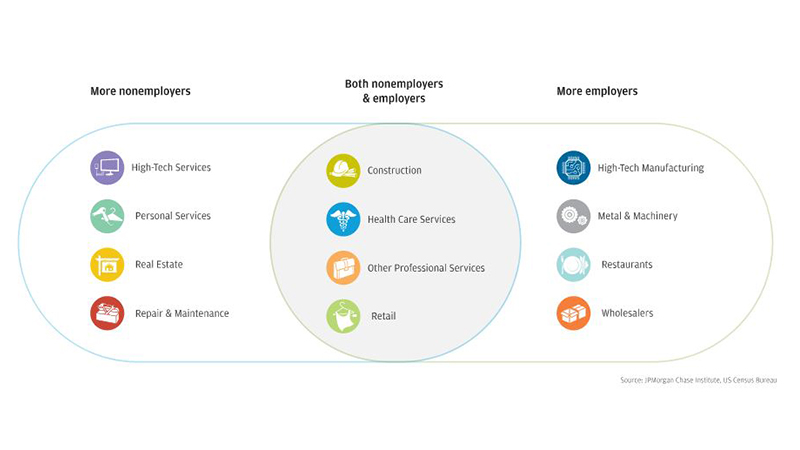 Figure 2: Industries Vary in their Share of Employer and Nonemployer Small Businesses

With this heterogeneity in mind, this brief describes the three core dimensions of employment, age, and growth orientation in detail along with existing research that sheds light on the importance of these distinctions to the economy and its growth. We then identify policy impact areas most closely related with each of the eight segments.

Policymakers frequently point to the significant role that the small business sector plays in job creation. The sector provides jobs for 80 million people in the U.S. Thirty percent of these jobs are the jobs of the owners of nonemployer businesses, while 70 percent are the jobs of the employees of employer small business. Given the prominence of job creation in the policy conversation, we first draw attention to the distinction between those small businesses who have employees and those that do not.1 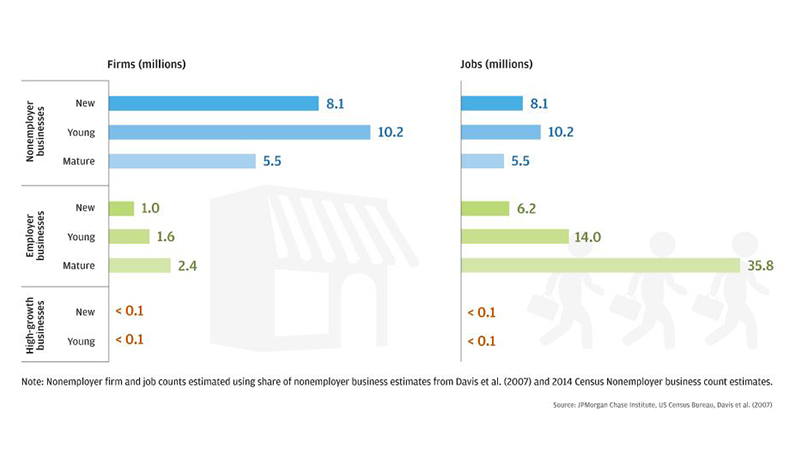 Moreover, nonemployer businesses also show a greater extent of dynamism than employer businesses, exhibiting higher entry rates, though higher exit rates as well. Given the size and vitality of this segment, policies directed at these business owners could affect the economic lives of significant numbers of households, especially to the extent that the policies address the unique challenges small nonemployers face.

Notably, a very small share of businesses show signs of significant growth—as a result, these firms make up a tiny fraction of the overall universe of small businesses, both in terms of firms and employees.3

While the typical employer small business makes a greater aggregate contribution to the economy than the typical nonemployer business, the demands of employment can make them more fragile as well. In The Ups and Downs of Small Business Employment, we found that employer small business operate with substantially less cash liquidity than nonemployer businesses, when their cash liquidity was scaled against their typical cash outflows, as depicted in Figure 4.

While business age is an important differentiator for both employer and nonemployer businesses, it is likely useful to think of the age of a business differently across these two segments. For employer small businesses, the hiring of a first employee is a significant commitment to participation in the economy through job growth and employment. In contrast, the age of a nonemployer cannot be marked to the hiring of a first employee. Still, the time since earlier initial commitments to sustained business economic activity is important. Such activities could include claiming self-employment tax treatment or filing business taxes, acquiring a business-specific financial service, or registering the business as a corporation or an LLC. These differences notwithstanding, we identify three distinct age categories that likely shape the experiences of both employer and nonemployer small businesses. We define new business as those two or fewer years old, young firms as those that are three to ten years old, and mature businesses as those that are at least eleven years old. 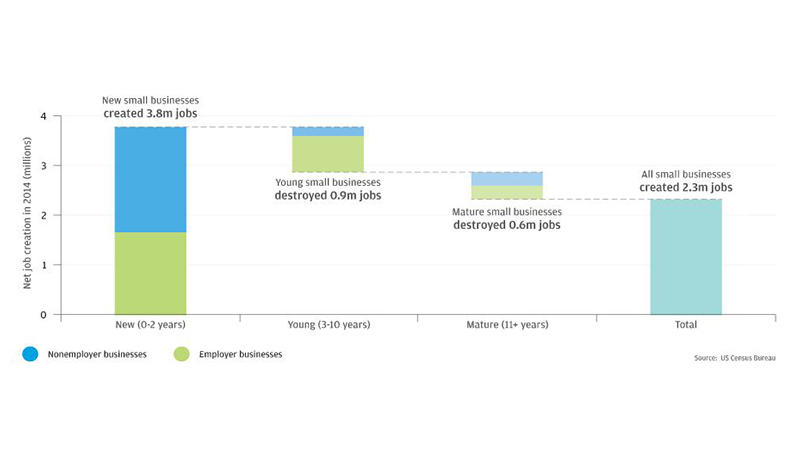 Moreover, these businesses also exhibit increased stability—stability that can play a significant role in sustaining small businesses, their owners, and their employees. In The Ups and Downs of Small Business Employment, we found that younger employer businesses experienced a greater degree of payroll volatility than older small employer businesses. Policymakers interested in the small business sector as a provider of sustainable employment for families might find significant traction with interventions targeted at supporting this large segment of small businesses. 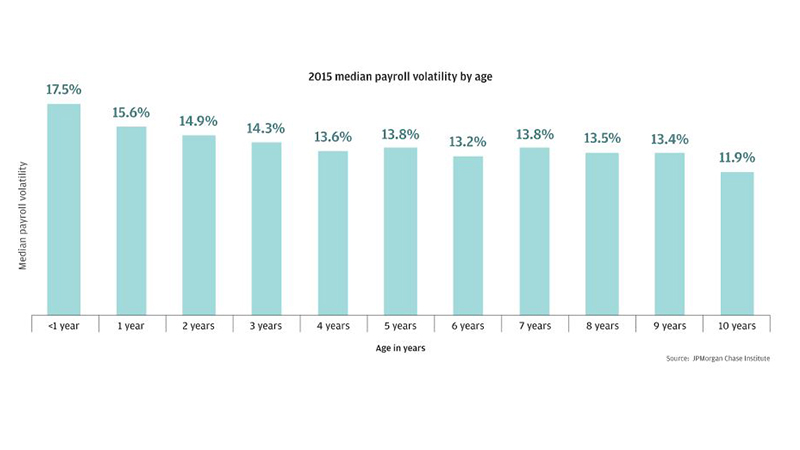 Notably, owners of businesses that survive the first few years may gain the expertise to understand and evaluate the policy choices and regulations targeted at smaller employers, though their small size may mean they do not have the scale to effectively engage the policy framework and/or institutions.

Finally, many policymakers have looked to the small business sector as a source of innovative rapid economic growth. While a two-year old employer construction business might need support getting access to short-term equipment finance facility, a two-year old employer biotech firm might benefit from programs that increase access to long-term capital investment to finance payroll until a biologic makes its way through FDA approval and becomes commercially viable. 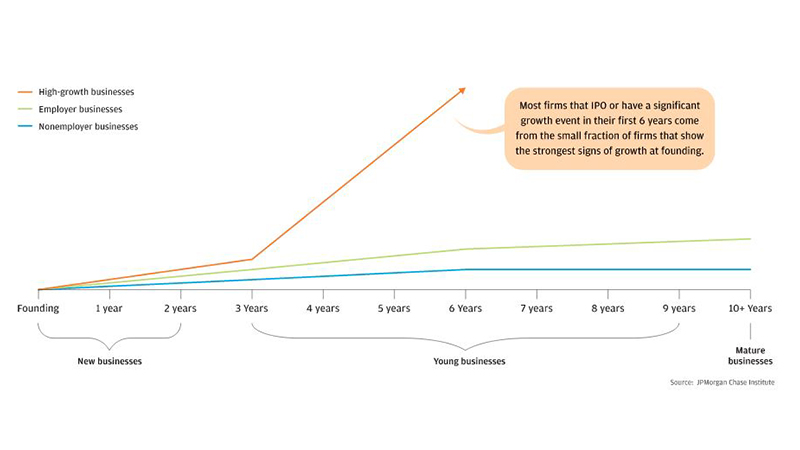 While rapid growth itself is a small business outcome rather than a characteristic of small businesses that could be targeted ex ante, recent research has begun to identify observable predictors of significant economic growth. As Figure 7 depicts, a very small number of small businesses make early strategic investments to support the potential for large-scale growth—growth in the economic value of the firm, in their numbers of employees, and in their impact on the U.S. economy. Their numbers are small, and may be decreasing over time. The number of initial public offerings has decreased notably in the past four decades (Gao et al. 2013), with several years of over 400 IPOs in the 1990s, down to 117 in 2015 (Ritter 2016). Even at a potentially diminished scale, these small numbers of firms stand to make an outsized impact on the U.S. economy. By some estimates, firms that manage to acquire venture financing account for 40% of U.S. publicly listed companies (Kerr et al. 2014).

Policymakers have shown great interest in finding ways to increase the number of the small businesses in strategic growth segments, due to the large economic each small firm that successfully grows can have. Still, there is likely room to improve the targeting of these policies by understanding some of the key distinctions among businesses that have the potential to significantly grow.

While statistics can paint a broad picture of the aggregate experiences of small businesses, the heterogeneous opportunities the sector offers may best be illustrated through the lens of individual firms. With that in mind, we conclude by grounding our broad findings in vignettes that characterize typical experiences of small businesses in each of our identified segments. 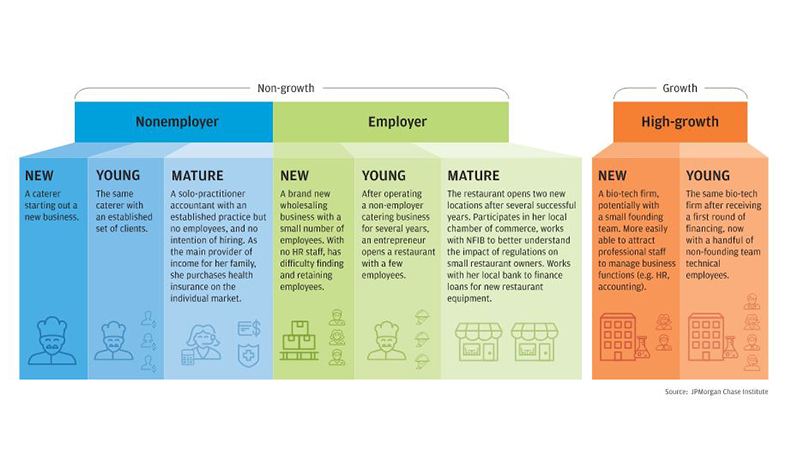 While this is not the first effort to identify small business segments that matter, we believe that the eight segments identified here showcase distinctions that are meaningful to people who own small businesses, the people they employ, and the policymakers who seek to understand and support these businesses.

These potential limitations notwithstanding, we believe that a simple segmentation that focuses on a small number of dimensions is a useful contribution to the community of small business stakeholders engaged in making research-based policy and decisions, and can serve as a tool to better co-ordinate the data-collection and analysis by researchers with the questions raised by those who want to make policy and decisions based on research.

Footnotes
1.Notably, this distinction is not fixed over time—in some cases nonemployers become employers. This transition is not particularly common. Hiring a first employee can be a substantial organizational lift for a nonemployer firm (Headd and Saade, 2008: 3), and only 3 percent of young nonemployers successfully make this transition (Davis et al. 2007: 3).
2.The 23 million nonemployer businesses reported by the Census Nonemployer Survey align closely but not precisely to people who report as self-employed with no employees in the Current Population Study.
3.Notably, the employment behavior of these firms allows Census Bureau to track them well through data collection efforts like Statistics of US Businesses and The Business Dynamics Statistics. These large robust data sets have done much to facilitate empirical research that can inform policy making about employer businesses.