Americans experience tremendous income volatility, and that volatility is on the rise. Income volatility matters because it is hard to manage. The typical household faces a shortfall in the financial buffer necessary to weather this volatility. Moreover, the decline in real wages since 2009 for all income groups except the top 5th percentile means that life is harder to afford in general, but even more so when earnings dip below average. Rapidly growing online platforms, such as Uber and Airbnb, have created a new marketplace for work by unbundling a job into discrete tasks and directly connecting individual sellers with consumers. These flexible, highly accessible opportunities to work have the potential to help people buffer against income and expense shocks. The “Online Platform Economy” offers fewer worker protections than traditional work arrangements, however, which has led some to claim that the Online Platform Economy represents a fundamental shift in the nature of work.

This report from the JPMorgan Chase Institute digs deeper into the demographics and sources of income volatility and provides an unprecedented look at the impact of the Online Platform Economy. This analysis relies on high-frequency data from a randomized, anonymized sample of 1 million Chase customers between October 2012 and September 2015. To examine the Online Platform Economy, we assembled the largest sample of platform workers to date—a dataset of over 260,000 individuals who have offered goods or services on one of 30 distinct platforms.

Finding One: Income volatility, prevalent across the board, was most marked among the young, those in the bottom income quintile, and those living in the West.

The percentage of people who experienced more than a 30 percent month-to-month change in total income: 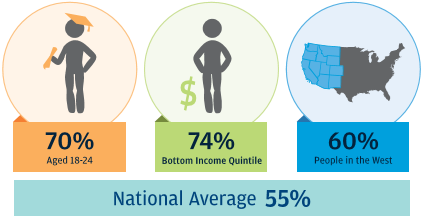 Demographic Attributes of People who Experience the Most Income Volatility

The vast majority of people aged 18-24, individuals in the bottom income quintile, and people living in the West experienced on average more than a 30 percent month-to-month change in total income.

The mean monthly change in labor income was $475 for median-income earners.

Finding Three: Most of the month-to-month volatility in take-home pay (86 percent) came from variation in pay within distinct jobs.

Finding Four: Almost four in 10 individuals experienced a job transition in a given year, contributing 14 percent of the month-to-month volatility in labor income.

* Almost 4 in 10 individuals experienced a job transition over the course of a year.

Median individuals experienced a $1,108 change in monthly income when they gained or lost a job and $830 when they switched jobs.

As a fast-growing and highly accessible new marketplace for work, many have characterized the Online Platform Economy as the “future of work.” We define the Online Platform Economy as economic activities involving an online intermediary that provides a platform by which independent workers or sellers can sell a discrete service or good to customers. Labor platforms, such as Uber or TaskRabbit, connect customers with freelance or contingent workers who perform discrete projects or assignments. Capital platforms, such as eBay or Airbnb, connect customers with individuals who rent assets or sell goods peer-to-peer.

Finding Five: Although 1 percent of adults earned income from the Online Platform Economy in a given month, more than 4 percent participated over the three-year period.

Finding Six: The Online Platform Economy was a secondary source of income, and participants did not increase their reliance on platform earnings over time.

Although the sheer number of people participating has increased rapidly, reliance on platforms remained stable over time in terms of both the fraction of months that participants are active and the fraction of total income earned on plat- forms in active months. 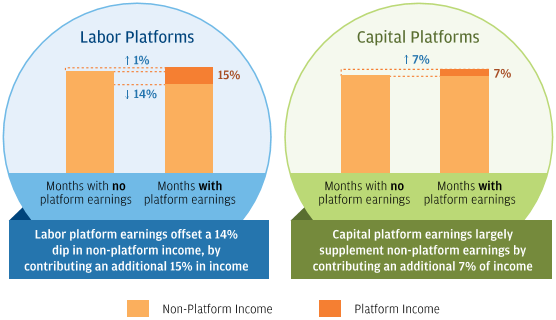 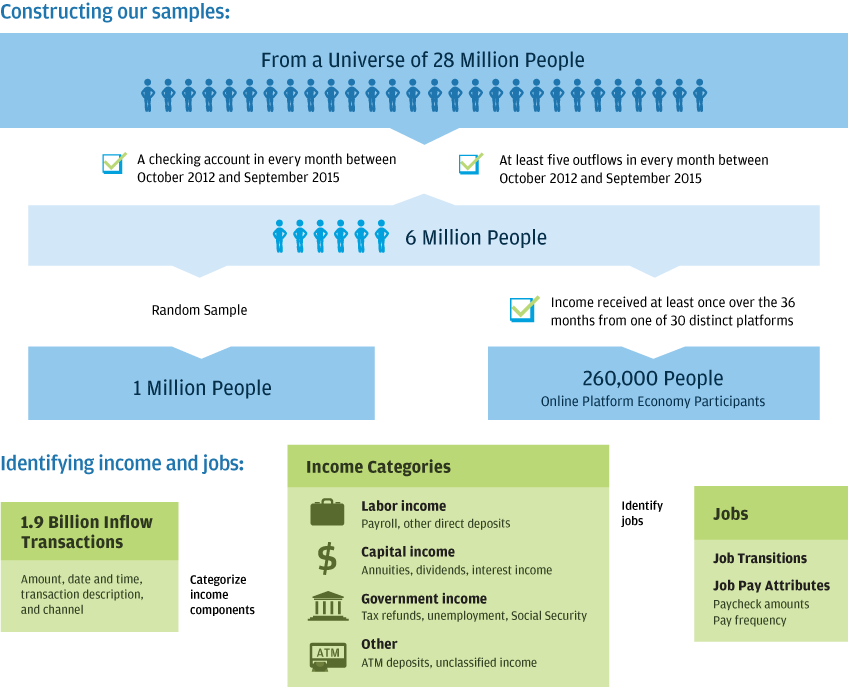 The findings in this report underscore the importance of asset building so that families have enough liquidity to weather volatility in income and spending. Key, predictable savings opportunities include December to March pay spikes, five-Friday months for individuals with jobs that pay every two weeks or weekly, and tax season for those who receive tax refunds. The five-Friday effect also reveals a structural disconnect between typical employer pay cycles and billing cycles. Eighty percent of individuals received an extra paycheck in five-Friday months because they held a job that paid every two weeks or weekly. Meanwhile, 40 percent of expenditures, including rent payments and installment loans, have a fixed per-month expense regardless of the number of days in that month. These fixed costs are potentially easier to cover during, or shortly after, months with an extra paycheck. Employers, financial institutions, utilities, and landlords can ameliorate this mismatch by offering paycheck cycles that sync with payment cycles or vice versa.

This study is the first of its kind to shed light on the Online Platform Economy using financial transactions, and provides an important foundation for the many policy and economic debates related to what some have termed the “future of work.” Over the three years of our study (October 2012 to September 2015), 4.2 percent of adults, an estimated 10.3 million people—more than the total population of New York City—earned income on the platform economy. This number increased 47-fold over the three years. We distinguish between labor platforms and capital platforms and find that, although labor platforms grew more rapidly than capital platforms, participation on capital platforms was more than 60 percent higher than participation on labor platforms. Although the sheer number of people participating grew rapidly, platform earnings remained a secondary source of income, and reliance on platform earnings did not increase for individuals over time.

The Online Platform Economy adds an important new element to existing labor markets, however. Simply put, landing a platform job is easier and quicker. Individuals can, and do, generate additional income on labor platforms in a timely fashion when they experience a dip in regular earnings. This is a potentially far better option to mitigate or weather volatility, if the alternatives are to constrain spending or take on additional credit. Moreover, this option meets a target need. Participation in labor platforms is highest precisely among those who experience the highest levels of income volatility—the young, the poor, and individuals living in the West.