RESEARCH Where are all the Contingent Workers?

In June 2018 the Bureau of Labor Statistics released initial results from its long awaited 2017 Contingent Worker Supplement (CWS), an update to a survey last conducted 12 years ago. The results were surprising to many. It showed a slight decline in the percent of workers whose sole or main job was an alternative work arrangement from 10.7 in 2005 to 10.1 in 2017.

These results were surprising in light of widely held beliefs that contingent work is on the rise, based not just on casual chats with Uber drivers but also hard data. Estimates by Katz and Krueger in late 2015, based on a questionnaire similar to the CWS, were that 15.8 percent of workers were in alternative work arrangements, a 50 percent increase over 2005. Analysis of tax filing data shows that the percent of people filing as self-employed or non-farm sole proprietors increased by over 30 percent between 2001 and 2014. And the JPMorgan Chase Institute has documented a nine-fold increase in the share of adults earning income from the Online Platform Economy (a subset of alternative work arrangements, involving online platforms which connect labor supply with labor demand) from less than 0.1 percent in late 2012 to 0.9 percent in mid-2016.

How do we reconcile these findings with the CWS results? Where are all the contingent workers? We offer a few possibilities.

1. Contingent work is generally a secondary source of income that wouldn't have been picked up by the latest CWS analysis of "main" jobs.

The CWS questions asked among earners about their main job, whether that main job was some form of alternative work arrangement.1 JPMorgan Chase Institute data show that the vast majority of platform earners rely on platforms as a secondary source of income. Platform income represented less than half of total monthly earnings for two-thirds of those using labor platforms to sell time, and for roughly 80 percent of those using capital platforms to lease assets or sell goods (Figure 1). Over the course of a year, we estimate that platform earnings represented just 24 percent of total income for labor platform participants and 10 percent of total income for capital platform participants. Surveys of independent workers in Federal Reserve's Survey of Household Economic Decision-making and of Uber Drivers corroborate this view. 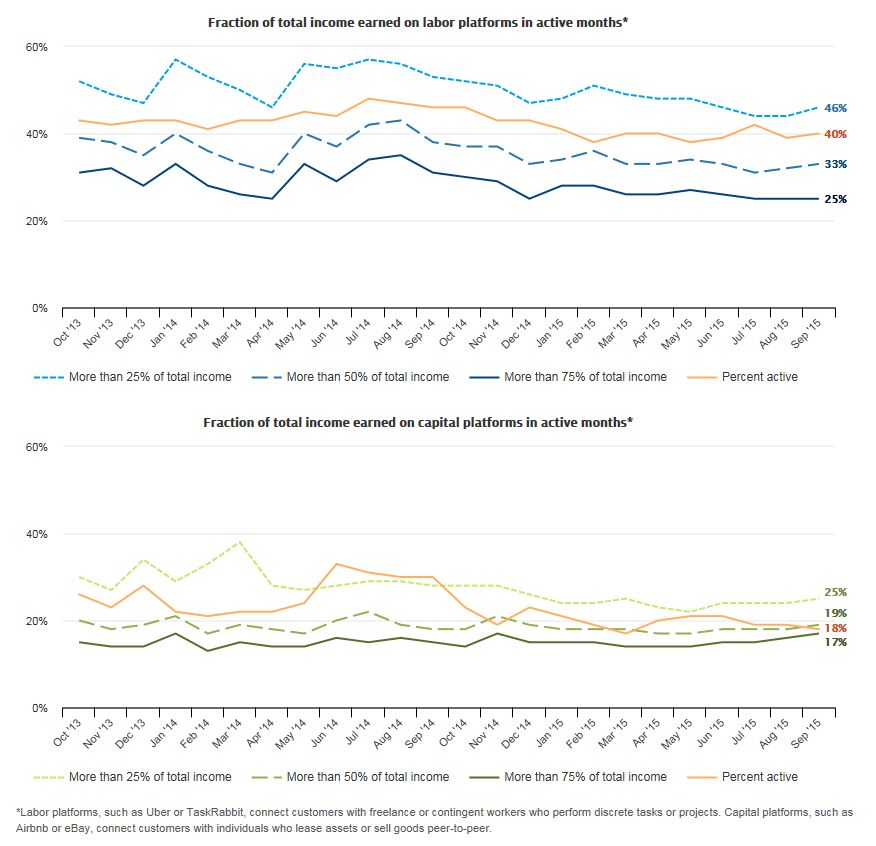 Time series are otherwise consistent in the first year; the percentage of individuals who rely on capital platform earnings for more than 75 percent of total income is 18 percent in October 2012.

In fact we know that people fit platform work around their other job(s), and potentially the "main" job on which the CWS is focused. Uber drivers' availability spikes around 6pm, right after the end of standard work hours, and the Uber application allows drivers to find rides on the way to a destination, such as on their commute home from work. In this way, new forms of contingent work are blurring the distinction between leisure and work.

2. An entire business cycle transpired over the 12 years between 2005 and 2017 making these two dates difficult to compare.

Over the course of the business cycle, unemployment swung from 4.4 percent in December 2006 to a high of 10.0 percent in October 2009 and then back down again. In February 2005, when the CWS was conducted, the unemployment rate was 5.4%, slightly higher than in May 2017 (4.3%). This matters because unemployment has been linked to lower rates of contingent and alternative work arrangements. In fact we know that individuals are earning income off of platforms between jobs. As shown in Figure 2, we document that individuals with no evidence of labor income from a traditional source in a given month were more likely to earn income from platforms.

Figure 2: The non-employed are more likely to participate in the Online Platform Economy*

Figure 2: The non-employed are more likely to participate in the Online Platform Economy*

And as shown in Figure 3, our work noted a marked increase between 2012 and 2016 in the percent of platform participants who had another job as the unemployment rate decreased. The key point is that a lower unemployment rate in May 2017 than February 2005 might have contributed to a lower participation in contingent work, all else being equal.

Figure 3: The share of platform participants with a traditional job increased as the unemployment rate dropped

Figure 3: The share of platform participants with a traditional job increased as the unemployment rate dropped

But there were also other structural changes in the economy over this time period. Some of these trends may have contributed to higher participation in alternative work arrangements. As enumerated by Katz and Krueger, these include technological advances that have made contingent work easier, an aging workforce more likely to be self-employed, and a fissuring of the workplace. Other secular trends may have slowed down the growth of contingent work, including a slowdown in business starts and decreasing employment among small firms. In other words, teasing out whether the contingent workforce grew or shrank relative to what would have been expected if not for these contextual factors is like tracking a feather in a hurricane.

3. Measuring growth in contingent work requires comparability between data points over time, which is difficult to achieve given differences in definitions, sources of data, and samples.

Survey data, such as the CWS, show that contingent work is stable. However, as mentioned above, evidence from tax records suggest that an increasing percent of tax filers are earning income from alternative work arrangements. Our own research measuring the percent of adults participating in the Online Platform Economy is more consistent with tax data, showing growth in contingent work.

The difficulty of measuring growth is exacerbated by respondents' varying interpretations of a survey question which can also change depending on context. A recent paper linking household survey respondents to tax filing data illustrates just how inconsistently people respond in different data sources: just 35 percent of respondents who filed the self-employment (SE) schedule on their taxes reported in the CPS that they are self-employed. Importantly, this discrepancy is increasing.2 This implies that, despite recent estimates of stability released by the CWS, they are not the last word on the levels and trends of contingent work, and administrative data help triangulate the picture.

Our own experience measuring the percent of adults participating in the Online Platform Economy highlights the difficulty in keeping a pulse on this dynamic sector. We sized the Online Platform Economy based on inflows into consumer checking accounts from labor and capital platforms. We started with a list of 30 platforms in our estimates as of October 2015. For the estimates we released for June 2016, just eight months later, we had expanded the set of platforms to 42. Later this year the JPMorgan Chase Institute plans to publish new estimates on participation in the Online Platform Economy through mid-2018, and our list has exploded to over 100 platforms. Importantly, some of this growth may reflect the migration of previously existing forms of contingent work on to online platforms and not necessarily net new growth in alternative work arrangements. We look forward to exploring these questions and sharing our results.

Footnotes
1.The 2017 Contingent Worker Supplement included four new questions about short tasks or jobs individuals found through a mobile app or website and were paid through the same app or website. Results from these questions have not yet been released.
2.This inconsistency also exists in the opposite direction: 49 percent of those who self-identified themselves as self-employed in the CPS filed the SE schedule. 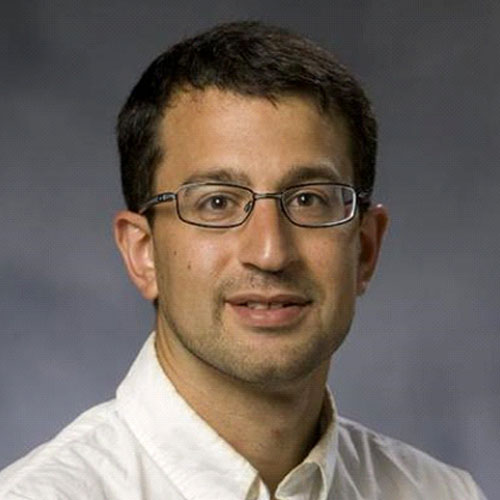