RESEARCH How COVID-19 could widen racial gaps in financial outcomes

Amidst the COVID-19 crisis, policymakers are grappling with the potential short and long-term economic impacts of efforts to mitigate the spread of the virus on families. Unemployment is rising at an unprecedented pace, and the U.S. government is issuing stimulus payments to hundreds of millions of Americans. In a new report, “Racial Gaps in Financial Outcomes: Big Data Evidence,” the JPMorgan Chase Institute offers a lens on how different segments of the population might manage income fluctuations in a COVID-19-induced downturn.  Drawing on data from between 2013 and 2018, the JPMorgan Chase Institute finds that Black and Hispanic families’ spending is more sensitive to short-term income fluctuations than that of White families. This result is largely explained by the large racial gap in liquid assets we observe—Black and Hispanic families have just 30 to 40 cents in liquid assets for every dollar held by White families. Our research suggests that even if Black, Hispanic, and White families experience the same declines in income during the COVID-19 crisis, Black and Hispanic families will likely reduce their everyday spending to a greater extent. Thus, while government programs aimed at restoring lost income—including unemployment insurance and stimulus payments—will be essential for all groups, such programs will be especially critical for Black and Hispanic families.

Public health data already reveal that the impacts of COVID-19 in the United States have been unevenly distributed across demographic groups. An analysis published by the Associated Press (AP) on April 8, 2020 found that Black individuals accounted for 42 percent of COVID-19 fatalities in the states and localities studied—even though they make up just 21 percent of the population in these locations. In Louisiana, one of the three states that we study in our new report, the gap is even starker: at the time of the AP analysis, 70 percent of Louisianans who had died of COVID-19 were Black, though Black individuals comprise just 32 percent of the state population.

The JPMorgan Chase Institute’s research quantifies how involuntary job loss differentially impacts consumption and wellbeing across racial groups. In an event-study examining families who receive unemployment insurance, we find that a $1.00 decline in income upon job loss (after accounting for unemployment insurance benefits received) is associated with a fall in non-durable spending of $0.46 among Black families, $0.43 among Hispanic families, and $0.28 among White families (Figure 1). Thus, while all families tend to reduce spending upon job loss, Black and Hispanic families do so to a larger extent. These numbers imply that when families experience a $500 decline in monthly income as a result of job loss, Black and Hispanic families reduce their monthly spending by roughly $230 and $215, respectively—a $75 to $90 larger cut in spending than White families make ($140), resulting in perhaps one less trip to the grocery store per month. 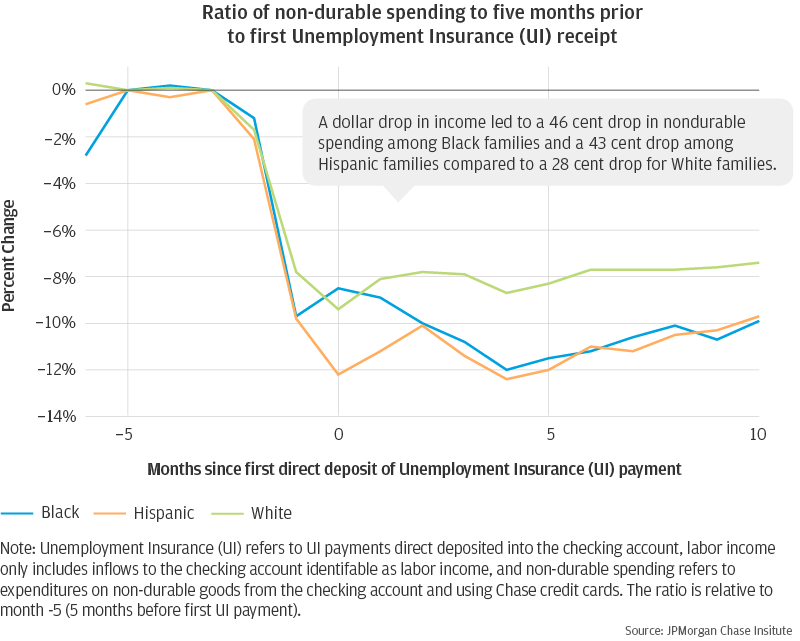 How COVID-19 could widen racial gaps in financial outcomes

We anticipate a similar disparity in consumption changes among individuals who face moderate income losses—for instance, among workers who are not laid off but whose hours are cut. In a companion academic paper, we examine the path of families’ spending when their employer raises or lowers pay for all employees. Even in the face of these smaller employer-driven income changes, Black families alter consumption by 50 percent more than White families, and Hispanic families by 20 percent more than White families. For example, a one-month decline in labor income of $500 leads to a one-month decline in consumption of $146 for Black families and $121 for Hispanic families, compared to $100 for White families.

In addition to describing disparities in families’ responses to income loss, the “Racial Gaps in Financial Outcomes” report also studies how families’ spending changes upon receipt of a tax refund. Our results on this subject inform how families may respond to the stimulus payments that the federal government has authorized under the CARES Act; these stimulus payments will be similar to tax refunds in magnitude (most tax refunds and stimulus payments are in the $1,200-$4,000 range) and timing (families can roughly anticipate their arrival date). In our report, we find that Black and Hispanic families exhibit larger increases in spending upon receipt of a tax refund. Thirty days after receiving a tax refund, Black families have spent 52 percent of their refund, while Hispanic families have spent 49 percent and White families just 38 percent (Figure 2). Thus, in the same way that Black and Hispanic families’ spending is more sensitive to declines in income than White families’ spending, their spending is also more sensitive to increases in income. In short, the stimulus payment may be more instrumental for Black and Hispanic families than White families in allowing them to sustain consumption levels or catch up on spending they may have deferred. 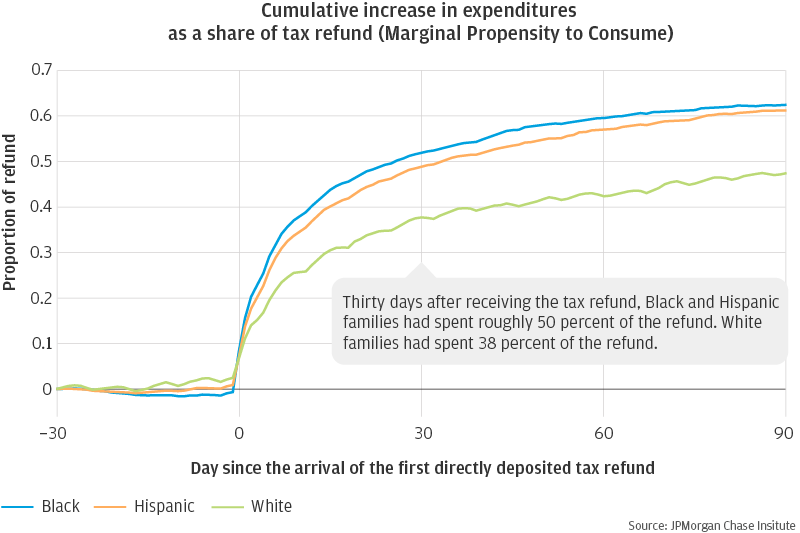 How COVID-19 could widen racial gaps in financial outcomes

For those whose aim is to reduce racial disparities in financial outcomes, it is essential to understand why racial groups exhibit different levels of sensitivity to income changes. In our report, we find that racial differences in liquid assets almost entirely account for differences in consumption sensitivity. We don’t claim to have proven a causal link, but when we control for racial disparities in liquid assets (specifically measured as liquid asset buffer, or how many months’ worth of spending one has in liquid assets), racial gaps in the spending response to income fluctuations largely disappear. Thus, if Black, Hispanic, and White families all had the same levels of liquid assets, we might expect to see almost no racial differences in their spending response to involuntary job loss, payroll fluctuations, or the arrival of the tax refund.

These results suggest that policymakers seeking to ease the economic burden of COVID-19 should consider focusing their efforts on families with the lowest liquid asset buffers. These efforts may take the form of income-support programs such as expanded unemployment insurance, paid leave, and direct stimulus payments; alternatively, policies that help low-liquid-asset families to reduce large expenses (e.g., rent payments and medical expenses) or build assets may also be effective. Regardless of the specific policies implemented, decision makers should recognize that without policy intervention, even a short economic downturn will be hardest to weather for families with low liquid assets, disproportionately so for Black and Hispanic families.