RESEARCH Local Consumer Commerce in the Wake of a Hurricane

A number of natural disasters (Opens Overlay) made national headlines in 2017, including but not limited to, Hurricanes Harvey  and Irma. Harvey made landfall near Corpus Christi, Texas on August 25th, followed by Irma’s landfall at Cudjoe Key, Florida on September 10th. Houston and Miami, two metro areas we track, were in their path. The cost of these storms was significant, including loss of life, damage to public health and safety infrastructure, and the destruction of durable capital assets. Estimates of the damage costs from Harvey and Irma were $125 and $50 billion, respectively.1 The storms also damaged short-term economic activity through the slowing of local commerce. To better understand the impact and scope of the local commerce slowdowns in these areas, the JPMorgan Chase Institute leveraged the monthly Local Consumer Commerce Index, our measure of de-identified year-over-year consumer spending growth across 14 metro areas.

Local consumer commerce in the Houston metro area declined by 7.5 percent between August 2016 and August 2017 (the Harvey “landfall month”). Recovery began in September 2017 (the Harvey “recovery month”), when local commerce in Houston registered a year-over-year growth rate of 9.3 percent. The increase in spending by consumers at Houston businesses in the recovery month more than offset the decline in spending from the landfall month. The impact of Hurricane Irma differed from that of Hurricane Harvey. In September 2017 (the Irma “landfall month”), local commerce in Miami declined by 3.7 percent. By contrast, October 2017 (the Irma “recovery month”) saw year-over-year growth of 2.4 percent.

The magnitude of the net spending decline in the wake of a hurricane can be seen when comparing Houston and Miami to the 12 other metro areas we track. In the period between January 2014 and July 2017 (the month before Harvey’s landfall), growth in Houston was fairly correlated with growth in other metro areas. The same could be said of Miami’s relationship to the 12 other LCC metros over the period between January 2014 and August 2017. As can be seen in Figure 1, the arrival of the hurricanes disrupted this relationship significantly. In the landfall months for both Harvey and Irma, most metros saw higher local commerce growth than the preceding month, while Houston and Miami saw substantial declines.

The initial declines in local commerce, relative to other metros, were similar in Houston and Miami. However, the storms differed in important ways, which may have led to some of the differences in distributional impact across metros. As can be seen in Figure 3, Harvey had a more direct and sustained impact on the Houston metro region because after the initial landfall near Corpus Christi, Harvey continued to pull water from the Gulf of Mexico as it traveled east along the coast. By contrast, Hurricane Irma travelled largely up the western portion of Florida, sparing (to some extent) Miami from the full brunt of the storm. From a measurement standpoint, it is important to remember that the LCCI is reported monthly, and these storms made their initial landfalls at different times in the month. Harvey’s initial landfall was August 25th, which means the spending drop dominates most of the observed change in spending. Irma had a different profile, making its initial landfall in Florida on September 10. Consequently, much of Irma’s recovery will be included in the net monthly figure for September. 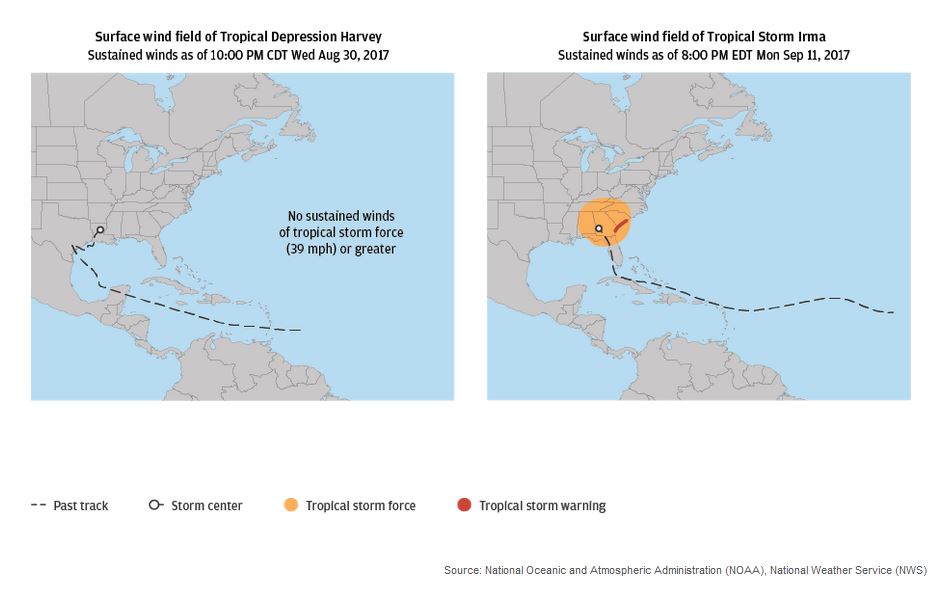 Tropical Depression Harvey did not sustain winds of tropical storm force (39 mph) or greater, and travelled east along the coast.

While the overall effect of the storms were similar, as measured relative to growth in other LCC metros, the distribution of impact differed. We explore some of these differences below, using data from the Local Consumer Commerce summary file we make available on the JPMorgan Chase Institute website. The summary file also includes growth splits by income and location of the consumer, as well as business size. Figures 4 and 5, along with Table 1, depict growth by age of the consumer in Houston and Miami.

Figure 5: Unlike Houston, Some Consumers Continued to See Growth in Miami in the Landfall Month

Natural disasters are not only a threat to life and property, but to the economic vibrancy of a metro region. Policy makers are often faced with the difficult task of determining where and when to allocate relief resources with limited data. By furnishing insights based upon the administrative data collected by Chase on a daily basis, the JPMorgan Chase Institute hopes to provide a helpful resource for public officials, nonprofit officers, and business owners seeking to support recovery from disaster.

We thank our research analyst, Bryan Kim, for his hard work and contributions to this research.

We would like to acknowledge Jamie Dimon, CEO of JPMorgan Chase & Co., for his vision and leadership in establishing the Institute and enabling the ongoing research agenda. Along with support from across the firm—notably from Peter Scher, Len Laufer, Max Neukirchen, Patrik Ringstroem, Joyce Chang, and Judy Miller—the Institute has had the resources and support to pioneer a new approach to contribute to global economic analysis and insight. 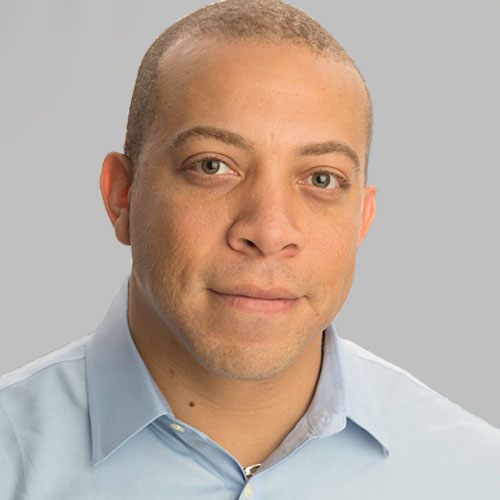