RESEARCH Travel for Business or Pleasure: Where does your city rank?

Share of Spending by Visitors to the Metro Area

City and regional governments spend considerable time promoting their cities to international markets whether for exports of goods or as a tourist destination. Overlooked is the importance of domestic visitors—business travelers, tourists, or day-trippers—who allow a metro area to extend its economic reach. Much as exports enable firms to reach new markets and consumers beyond their immediate surroundings, increasing the number of visitors to a metro area increases the number of potential customers. Visitors are important beyond the traditional tourist-centric sectors such as hotels or restaurants, with purchases extending into retail and entertainment amongst others. Leveraging data from 12.4 billion anonymized credit and debit card transactions in 15 metropolitan areas, the JPMorgan Chase Institute's recently released Profiles of Local Consumer Commerce (PLCC) can help better explain spending by domestic visitors in metropolitan areas.

Tourism is generally considered to be highly seasonal, with many destinations known for having peak and quiet periods. However, spending by out-of-towners across most cities remains stable throughout the year, as reflected in the fifteen city average.1 Despite this relative stability, two distinct seasonality patterns emerge: (1) across several cities, notably San Diego and Denver, a slight increase in summer months; and (2) for two of the fifteen cities, Phoenix and Miami, a spike in winter months, reflecting the well-known migration to warm weather and so-called "snowbirds." Interestingly, though the pattern is similar for both cities, the level share in Phoenix is considerably higher than that in Miami—in some months higher by 10 percentage points. In the chart below, we show these patterns by plotting the share of spending by visitors in select metro areas between October 2013 and July 2015. 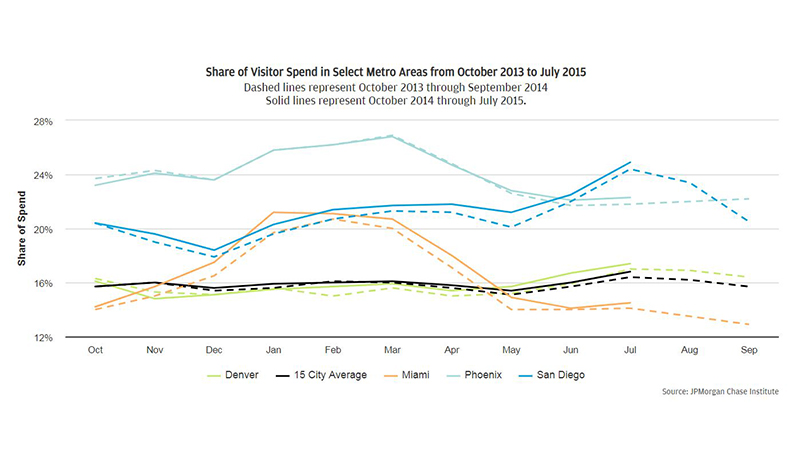 Travel for Business or Pleasure: Where does your city rank? | JPMorgan Chase Institute

Visitors are only one part of local economies, but in most cities they represent a meaningful percent of local consumer commerce and thus can be an important market for firms looking to expand beyond the immediate residents of their metro area. The JPMorgan Chase Institute's new data series, Profiles of Local Consumer Commerce, enables better tracking of these data within and across metropolitan areas, and is a powerful tool for understanding consumer commerce and devising better policies to enable commerce.

The JPMorgan Chase Institute is committed to delivering data-rich analyses and expert insights for the public good. Our recently released report Profiles of Local Consumer Commerce tells the story of the decline in everyday retail spending across fifteen metro areas. Over the next five weeks, the JPMC Institute will explore the differences between the metro areas through a series of blog posts ranking the cities across select dimensions from the report.

Footnotes
1.While the American Community Survey (ACS) provides timely data as it is conducted every year instead of every ten years, it samples less than 1 percent of the population whereas the Census long form previously sampled one in six households. In addition to differences in the questions asked, the smaller sample size can make it difficult to accurately study certain subpopulations such as seniors within a geographic area.