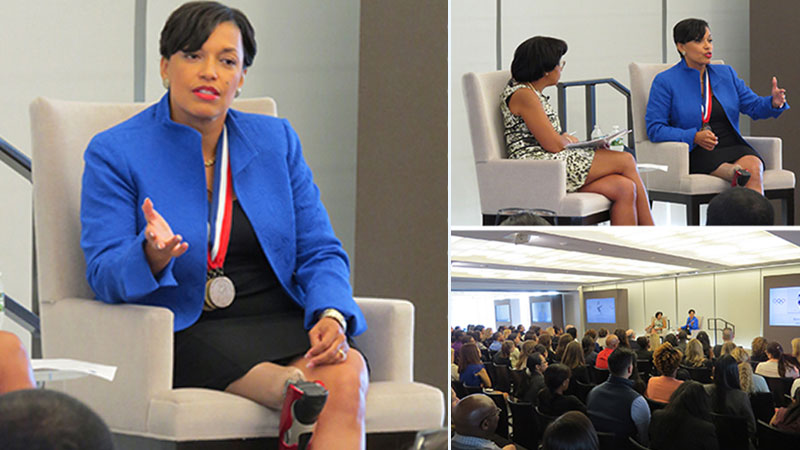 Winners Just Get Up Faster

Diversity and inclusion is the key to building a resilient culture that helps companies and communities thrive.

If you are a coffee fan, you may already know Bonnie St. John. In 2006, she was quoted on a Starbucks cup during its “The Way I See It” campaign: “I was ahead in the slalom. But in the second run, everyone fell on a dangerous spot. I was beaten by a woman who got up faster than I did. I learned that people fall down, winners get up, and gold medal winners just get up faster.”

Bonnie St. John is the first African-American woman to win medals in skiing at the Winter Paralympics competition, a Rhodes scholar, author and a White House fellow.

During a recent thought leadership discussion for employees, we invited St. John into a conversation with Pat David, Senior Diversity Advisor. St. John shared with our employees topics that touched on disability, prejudice, her history with sports and more.

“You have to be nimble and you have to be able to get up fast, and diversity gives us so much for flexibility, strength, creative ideas, and innovations. Resilience is the ultimate competitive factor in the future.”

In high school, she was bused into La Jolla, Calif., from National City as part of a diversity program. A school friend invited her on a skiing trip where she fell in love with the sport. She spoke glowingly of that friend, thinking not many other people would have extended the invitation to an amputee. “She had a bigger vision for me than even I did,” said St. John..

From there she would eventually rise to the 1984 Winter Paralympics competition, where she won a silver medal and two bronze medals. She said that being at the games was an eye-opening experience because for the first time people would come up to her asking for autographs, instead of asking if she needed help.

St. John said that despite the status she had reached in business and life — she worked in the Clinton administration as the Director for the National Economic Council and works as an advisor and keynote speaker — she faced pressure as both a person with disability and a black woman. She is now dedicated to lecturing on topics of diversity and self-improvement.

“It’s not just about recruiting and bringing people in. It’s really about maximizing people that are there and not trying to turn them into clones of everybody else in order to succeed but to really embrace that diversity.”

Learn about our initiatives in diversity, equity & inclusion.

Explore the new era of disability inclusion at our company.