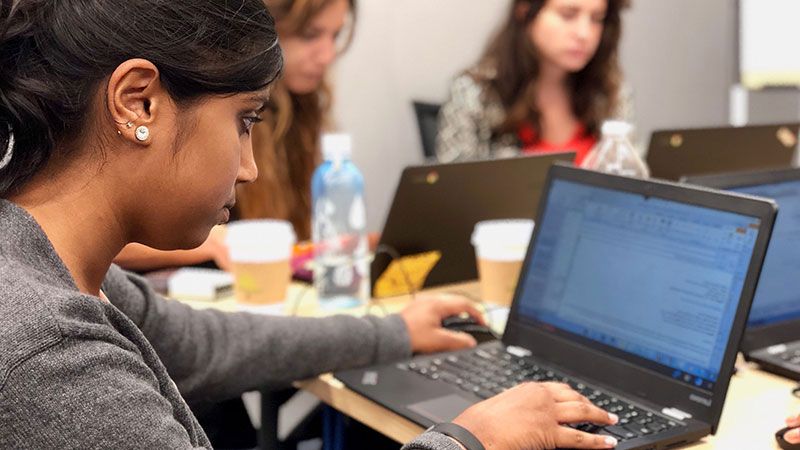 Why are Women Technologists Hard to Find?

We asked four JPMorgan Chase technologists about the gender gap. Here's what they had to say.

In this series we dig into gender diversity in technology, advice from women who have succeeded in the industry, and why equality is essential in the workplace.

Walk into any technology office today and you might wonder why there’s still not a lot of women in sight. It’s fair to say there’s not a major tech company or global corporation in the world that hasn’t been working to build up their contingent of female engineers. Yet women still make up just 25% of all technologists. It doesn’t help that women represent under 20% of computer science majors today. But that’s not the only reason for their under-representation. Research shows that female technologists are twice as likely to leave their tech jobs as men1

Deep-rooted unconscious bias against women in STEM fields are a big part of the problem. Dealing with those biases is an industry-wide challenge, especially at a time when demand for technologists is outstripping supply, and gender diversity is reaping significant competitive benefits for companies.

“Diversity of thought is essential to the future of tech,” says Lori Beer, Global CIO, JPMorgan Chase. “Bringing together people from different backgrounds is critical to solving real-world problems – and building the right technology for our customers and clients.”

To shed some light on the subject, we asked JPMorgan Chase technologists to discuss confidence, collaboration, and how gender diversity impacts team dynamics. Here’s what they had to say:

“When I was in school, my attitude was: ‘so I’m the only woman in the room; what’s the big deal?’ But now that I’m in the workforce, I find women second-guessing their instincts and decisions more than they should. When sharing a new idea, a woman might preface her words with: ‘I’m not sure this will work, but let’s try…’ or feel judged if she says: ‘I don’t know,’ even when others around the table don’t know either.

I’ve learned that knowledge is power, but confidence is key. Keep learning and asking questions and have confidence in your knowledge and experience when you walk into a room.”

“Male developers tend to be competitive, and in my experience, adding female coders can make the different between having an all-male team of lone wolves and a collaborative force of innovation.

Women bring a more pragmatic approach to the table. They’re less concerned about being right all the time and they seem to have less of a need to flaunt their egos. Adding women to a tech team usually creates a friendlier, more collaborative dynamic, and a greater propensity among team members to support one another.”

“Unconscious bias is just one side of the coin. The other is lack of confidence among women in male-dominated STEM fields. I was having an “open doors” session once, and one woman who happened to be the only female on a team of 12, expressed her concern that she was not ‘technical enough.’ I later asked her supervisor about this, who was stunned to hear that one of her very best performers felt this way.

I’m confident, but I had a lot of support from great role models. My advice to women in senior tech roles is to pay it forward and encourage women to be confident and brave, take more risks, and be hungry for opportunities. Female leaders have to show other women coming into the field that there are many different paths to a great career and plenty of women ready to support them on their journey and help grow their confidence.”

“I always ask one of my best software engineers for her input when I am making important decisions for our team. Apart from being a great coder, she excels in communication, networking and naturally getting things done. I really feel that women on the team bring a different perspective that’s incredibly valuable. Women generally tend to be very good at multi-tasking, planning and organizing, and are more intuitive when it comes to understanding personality differences.

I have found, comparatively speaking, many women tend to be less proactive when it comes to asking for what they deserve. We’re trying to address that. JPMorgan Chase has programs that help women prepare for their next promotion and beyond.”