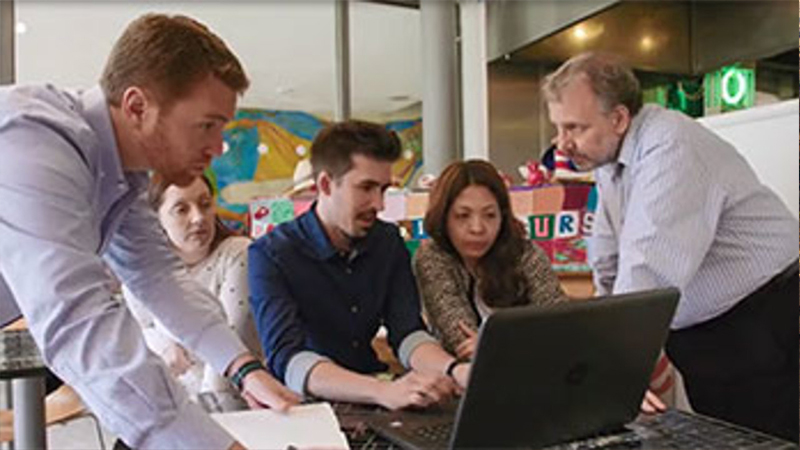 What Do Nonprofits Need Most? Expertise

What Do Nonprofits Need Most? Expertise

On Screen: A large J.P. Morgan building - then, Hang, a woman with black hair and glasses. Interspersed, a montage of J. P. Morgan executives and representatives of the company's non-profit partners: Toynbee Hall; Allia; Bromley By Bow Centre; and Fair Finance.

Hang: The Service Corps is a J.P. Morgan leadership development program where we pair top-performing J.P. Morgan colleagues with non-profit partners in communities where we have a presence.

On screen: Daniel, a man with short hair and a gray suit. He stands at a podium

Daniel: This program is a way to contribute the best asset that we have in this company, that is talent.

On screen: Eric, a man with hazel eyes, a gray suit and blue tie. He stands by a window. Interspersed, a montage of professionals collaborating on projects.

On screen: Damian, a tall man with white hair. He stands in a room near a leafy plant.

Damian: One of our core activities is to improve people's financial health

Ali: I think this week our game plan is just information gathering .

On screen: Allison, a woman with short black hair.

Allison: Try to start interacting, and then we do have some formal interviews set up for the afternoon.

On screen: Martin, a man with salt and pepper hair.

Martin: Allia is a social enterprise charity, and the main three things we do are social investment, business centres, and business support.

On screen: George, a man with black hair and a beard, tours a large room with a group of professionals.

George: We've landed here on day one of their first opening. That's pretty significant just to be able to see that and kind of feel the experience of the new tenant coming on.

On screen: Thomas, a man with dark brown hair.

Thomas: With Allia, what we're looking to do is work on finding potential sites as they expand into East London.

On screen: Dan, a man with brown hair and a sweater.

Dan: The Bromley By Bow Centre supports a very deprived community in East London that historically has been quite neglected, and helps people to realize their potential.

On screen: Michael, a man with short light brown hair, interspersed with scenes of professionals interacting at an outdoor table, and around a computer.

Michael: We're now at day and a half, two days into it, and I feel like we already have our collective heads wrapped around at least the challenge .

Allia staffer: It's week two on the London Services Corps Program and we've got some really good pointers to take forward

On Screen: Bromley by Bow Centre.

Michael: Today, midpoint in our journey, we reached key milestone because we got the feedback that we needed

On screen: Joya, a woman with long brown hair.

Joya: We're getting closer to what we think is the best solution.

On screen: In an open arts and crafts room, a group of people mold clay bowls, cups, and ashtrays, with their hands.

On screen: The Toynbee Hall team tours a construction site.

Ali: Hi, we are about to take a tour of the new Toynbee Hall location. We got our hardhats on and we're ready to go!

On screen: On a rooftop, Faisel, a man with glasses and a light sweater.

Faisel: Fair Finance is a social business helping and tackling financial exclusion in the UK.

On screen: Ian, a man with short brown hair.

Faisel: We've delivered a first draft of the annual report to the company and now we're moving on to the investor presentation.

Staffer #1: Today we've been doing a lot of research, hit a few walls.

Staffer #3: It's amazing what they've done to the space.

Staffer #4: You really get an idea of what it means to open up a future business centre.

On screen: Vignesh, a man with black hair and heavy eyebrows. He stands with a blonde team member on a rooftop. Interspersed, a montage of the staff collaborating on their project, around a table and at their computers.

Blonde team member: It's week three, day one, and we've been preparing all morning for the investor day this afternoon.

Vignesh: It's amazing what 16 like-minded people can achieve when they come together and put their hearts and minds to it.

On screen: Eileen, a woman with long auburn hair.

Eileen: I admire what they do for this local community.

Team member #2: It's a pretty phenomenal leadership development experience, having to think on your feet, having to work as a team, working on something that's truly making a difference in people's lives that are clearly less fortunate than most.

Team member 1: Makes you feel that you're giving back in a way that I'm not able to do when I'm sitting behind my desk.

On screen: Inside the Allia workspace, with staffers at their computers. A staffer turns and waves.

Staffer #5: The temporary business centre is open. Clearly a lot of buzz, a lot of energy. The businesses have started moving in.

On screen: Mayra, a dark-haired woman in a black and white sweater.

Mayra: One of the most important things is listen, listen, and listen some more. It's so humbling to see all of the things that they accomplish on a daily basis.

On screen: Ali, with her team.

Ali: We have just met with our program manager. We went through our recommendations and we got some really good feedback.

Allison: We're working with incredibly passionate people who are dedicating their lives to eradicating poverty.

On screen: In a large open room, Anna, a woman with pulled back brown hair.

Anna: Having J. P. Morgan here has really allowed us to step back and see the program from a different perspective.

On screen: In a large hallway, David, a man with short, sandy hair. He sits at a table with his team and shakes their hands.

David: They've really helped us put in place some materials which will allow us to get the investment we need to grow and succeed.

On screen: Zoe, a woman with short blonde hair. Interspersed, a montage of her smiling team members.

Zoe: Because of the support given to us by J.P. Morgan, I think within the next year, in the next two years, we'll be in a place where we're proving our impact with which to get more funding to make more of a difference in people's lives.