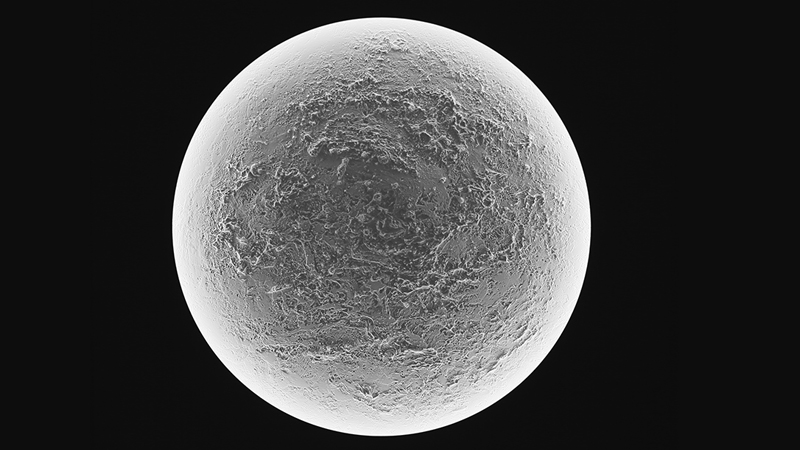 A Trick of Light

A Halloween Treat from the JPMorgan Chase Art Collection.

You’ve seen the moon how many times? Likely more than you can count. It’s hard to miss-a constant in the sky, and you’d recognize it anywhere. Or would you?

New York–based artist Žilvinas Kempinas has a knack for making you question those things you thought you knew. He takes the mundane, the everyday, and re-creates it-using light, shadow and resin. Such is the case with “Illuminator XXI,” a noteworthy part of JPMorgan Chase art collection. At first glance, the arresting work looks like a full moon, craters and all. But closer inspection reveals that Kempinas is playing with the viewer’s preconceived notions-and the laws of physics-to trick the eye.

"Just like a true moon, “Illuminator XXI” has its dark side: a message that in the age of selfies, photoshop and fake news it is important not to trust images, not to take surface for substance, not to get tricked by illusion. But on a positive note-nobody can stop our imagination, we can see things in clouds, and sometimes we can see the moon just by looking at a wall."

Kempinas, a Lithuanian native, first attracted the attention of the art world at his second show in the Spencer Brownstone Gallery in 2005, particularly with his piece “Bike Messenger,” a four-projection video that mimics the experience of riding through Times Square during rush hour. Much of his work involves the principles of physics, though Kempinas jokes that he was pretty bad at the subject while in school.

Physics again comes into play in “O (Between Fans),” one of Kempinas’ kinetic sculptures, which is also part of JPMorgan Chase’s art collection. Kempinas has long been a fan of the medium of magnetic tape, and here he uses looped and unspooled videotape between two pedestal fans. The result is a fluctuating O shape, penciling a constantly changing three-dimensional drawing in space. The art might use simple materials, but by playing with air and wind, Kempinas creates an installation with a new kind of kinetic appeal.

“Sometimes we can see the moon just by looking at the wall.”

And with "Illuminator XXI", as with his other work, Kempinas wants to upend our conventional modes of thinking: “It’s just an illusion, your eyes are tricked. And then you can ‘read’ this object as being an image of the moon because it’s a very iconic image. It can steer you in the direction of a romanticized celestial body, but then you come closer and see there’s nothing much but a rough wall lit,” he says. “It stands somewhere between pictorial illusion and reality.”